After 80 Years, Still Smiling on the Job

Fred Marcus, who was a longtime wedding photographer in New York, often said: “When the wedding is over the photographs will last forever. So will the relationships we made at that event.”

In January, the Fred Marcus Studio celebrated 80 years in business. The studio, which has always specialized in weddings, is one of the few multigenerational owned and run photography business still thriving in New York.

After more than seven decades on West 72nd Street, the company moved to its current 58th Street location in Columbus Circle in 2019. In doing so, they packed up thousands of photographs, volumes of digital archives and stirred memories created over the years.

They went from a 4,000 square feet space operating out of three different floors to 2,500 feet, which was all on one level, making it more cohesive for everyone to work. For over a month, they packed up 300 plus boxes, which contained 30 years worth of negatives and digital material, most of which were put in a storage unit.

They moved to the new space with more than a dozen cameras, lighting equipment, large printer, photo backgrounds, and 50-plus albums filled with archival photos. The rent at their previous location was exorbitant, they said, and they needed a less expensive location. 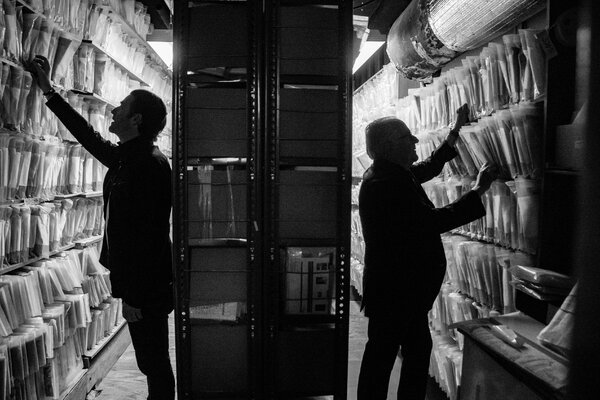 According to family lore, in 1939, Fred Marcus was a 29-year-old escaped Holocaust survivor living in Cuba. He made money taking pictures of families on the beach.

“All he knew was how to take photographs and connect with people,” said his son, Andy Marcus, 71, who lives on the Upper West Side with Judi Marcus, his wife and the manager of the studio.

“When I was little I asked him why he did weddings. He took out the Yellow Pages and flipped to commercial fashion photographers. There were pages of them. Then he went to wedding photographers. Only three or four were listed. He wanted to excel at something others didn’t.”

Fred Marcus was 31 in 1941 when he opened his studio in the basement floor in a building on West 72nd Street. Several years later, in an effort to keep his then 13-year-old son, Andy, out of trouble, he made him a lighting assistant at the weddings he was shooting.

“Afterward we’d swap out the used film for new film at 2 a.m. in the closet. We put a towel on the floor to block the light from entering,” Andy Marcus said. “We’d talk about the wedding. It was a wonderful way to get to know him.”

Andy Marcus never left the business. After graduating college he started working at the studio full time. When his father was injured in a car accident in 1975, Andy Marcus stepped up.

“I was left on my own to run the business,” he said. “I didn’t have a clue how to do that. I just knew I had to make it work. I wanted him to be proud of me.”

While Fred Marcus spent seven months in the hospital, Andy Marcus was thriving. The first torch was passed.

“When I started, each photo required one flash bulb. Then you had to change the film,” he said. “The most photos you took at a wedding were 80 to 100. When digital came in the early 2000s, it changed everything. Now you can take 100 photos of the bride’s shoes.”

What has not changed are the client’s desires regarding what to capture.

In 2001, Fred Marcus, then 91, died. Over the years Andy Marcus expanded the business, brought new energy, fresh ideas, raised prices and increased clientele. The ’80s and early ’90s brought opulence and over-the-top events. “The weddings were larger, there were more flowers, bigger bands, everything was on steroids,” Andy Marcus said.

[Sign up for Love Letter and always get the latest in Modern Love, weddings, and relationships in the news by email.]

The wedding industry grew. Celebrities became clients. Today average packages start around $9,000 to $20,000, though some clients have spent more than $150,000.

Then, Andy’s son, Brian Marcus, who learned the business the same way his father did, joined the business in 2003, returning to the East Coast after college and a brief job working as a production assistant at a film company in Los Angeles.

“This is a job my family has been passionately ingrained in forever,” said Brian Marcus, 42, who lives in Tenafly, N.J. Brian Marcus, who is now the company’s president, took over the business two years ago when his father started to slow down. His father still shoots weddings, meets with clients, and helps with photo selection and designing the albums.

“Being born into this, I already had a leg up because clients trusted me,” Brian Marcus said. They knew I had the knowledge and ability. Then I had to keep their trust and prove myself. Everyday I work to earn the respect my father and grandfather built.”

Today, not including Andy or Brian, they have six full-time employees. That includes the two photographers who work in the studio, cover weddings and handle production. Fifteen part-time staffers help with photography, video and lighting.

They have photographed more than 30,000 weddings, traveling around the world to capture couples on film and video. Among the celebrities they have witnessed saying ‘I do’ are: Mary Tyler Moore and Dr. Robert Levine, Billy Baldwin and Chynna Phillips, Eddie Murphy and Nicole Mitchell, Mario and Matilda Cuomo’s daughter and granddaughter, and Senator Chuck and Iris Schumer’s daughter. They also photographed the weddings of Donald Trump and Marla Maples, and Ivanka and Jared Kushner.

“My father knew how to take a photograph. Back then you couldn’t look at what you got to see if you captured the couple or the cake or people dancing. You had to trust you got the shot,” said Andy Marcus, who added that the wedding and event business could be an all-consuming, seven-day-a-week job. “It’s hard on your personal life. You can miss a lot of weekends and holidays with your family because you’re documenting other people celebrating them.”

But it is in these celebrations that the Marcus family has spent a lifetime capturing and creating a generational footprint.

“Seventy years ago, Fred Marcus shot my parent’s wedding, and 46 years ago shot mine,” said Judy Kaufthal, 67, of the Bronx. “This was a long-term relationship. I’ve known all of them. They did my three sons’ weddings. Fred, who wasn’t working anymore, came to my oldest son’s wedding just to give him a hug. That’s a special thing.”

In the wedding industry, nostalgia is everything.

“My father had a wonderful way with people. He told me to never say ‘smile’ to someone. Talk to them instead,” Andy Marcus said. “He built relationships. Then he kept them. I did, too. So does Brian. That’s how we keep this going. That’s why we’re still here.”