Billie Eilish, the 19-year-old Grammy-winning singer-songwriter, apologized on Monday after a years-old clip of her lip-syncing an anti-Asian slur surfaced on social media.

“i mouthed a word from a song that at the time i didn’t know was a derogatory term used against members of the asian community. i am appalled and embarrassed,” Ms. Eilish wrote in an apology posted to her Instagram story. She wrote, “the fact is that it was hurtful. and for that i am sorry.” Ms. Eilish added that she was “13 or 14” when the video was taken.

The clip was shared earlier this month in a TikTok video posted by a user named Lena. The video featured Ms. Eilish mouthing along to the song “Fish,” by Tyler, the Creator, which includes a derogatory term for Asian people in its lyrics.

The TikTok video also showed Ms. Eilish speaking in what many viewers interpreted as a derogatory, mock Asian accent. The post went viral, and many of Ms. Eilish’s fans demanded a response. 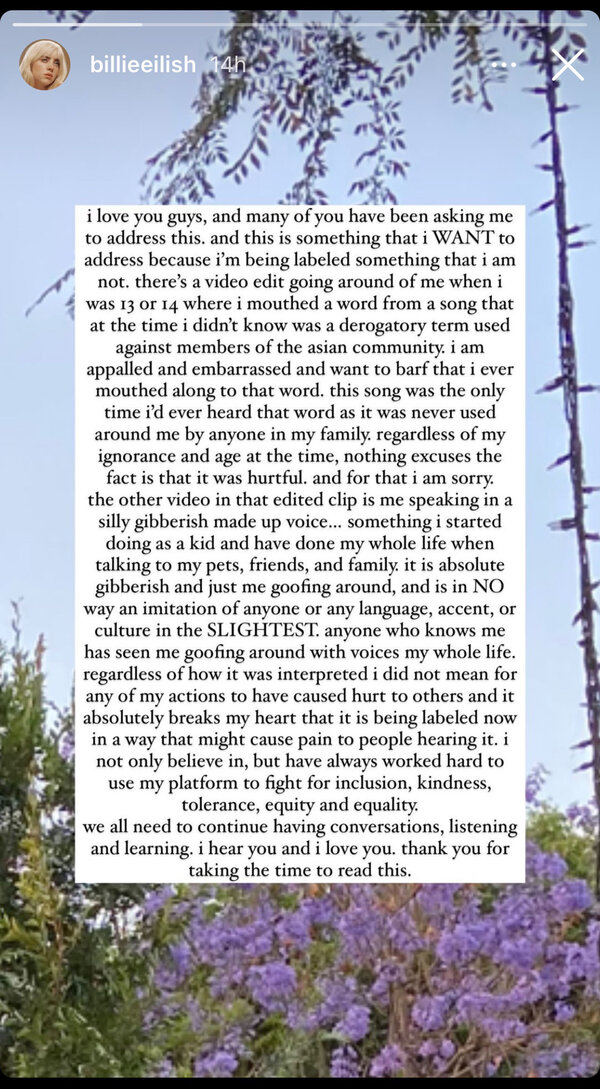 In her Instagram story, the singer said that she was “speaking in a silly gibberish made up voice,” something she has done since childhood when talking to pets, friends and family. Ms. Eilish added that it was “in NO way an imitation of anyone or any language, accent, or culture in the SLIGHTEST. anyone who knows me has seen me goofing around with voices my whole life.”

In a follow-up video, Lena, the TikTok user, said of Ms. Eilish’s apology: “she finally addressed this !!!” Lena added that she was “glad” and that it was “understandable and good she finally said something.”

The pandemic has fueled a rise in anti-Asian hate crimes, and the consciousness surrounding anti-Asian sentiment has been heightened. Influencers, civil rights organizations and nonprofits have started public awareness campaigns and denounced racist incidents. President Biden recently signed a bill to address the increase in assaults.

Celebrities in particular are under greater scrutiny for past actions and are expected to use their platforms for social good. Ms. Eilish ended her apology on this note, saying “i not only believe in, but have always worked hard to use my platform to fight for inclusion, kindness, tolerance, equity and equality.”