Last spring, after a divorce, Qadeera Ingram needed someone to talk to. Specifically, she wanted to be able to speak about spirituality and the bigger picture of her life.

Though Ms. Ingram, a 33-year-old government contractor in Goose Creek, S.C., is Christian, she isn’t a member of a church. So she hired Susan Pannier-Cass, a spiritual director and ordained minister, to talk about what she was experiencing, including raising her 6-year-old son in a pandemic at a time of widespread unrest.

Spiritual companions, also known as spiritual directors, are guides whose purpose is to listen deeply to clients and help them explore their spirituality, usually in a nondenominational capacity.

What they offer is not therapy; according to Spiritual Directors International, a nonprofit in Bellevue, Wash., the goal of meeting with a spiritual companion is to take a “meaningful step to help you find wholeness and balance in life, not to mention a sense of connection with however you might refer to God, Allah, The Universe, or the Ground of All Being, that which connects us all.”

The practice has roots in many faiths, particularly the Jesuit branch of Catholicism, but contemporary spiritual directors come from a variety of religions.

“Most people come to spiritual direction looking for ultimate meaning, however they might define it. We don’t define it for them,” said Seifu Anil Singh-Molares, a Zen Buddhist priest and the executive director of Spiritual Directors International. (While spiritual direction is the more familiar term, he said, he favors “spiritual companion” because it is more inclusive.) “We support you in finding your own way to God, if that’s how you describe it, or Brahman, or Tao.” 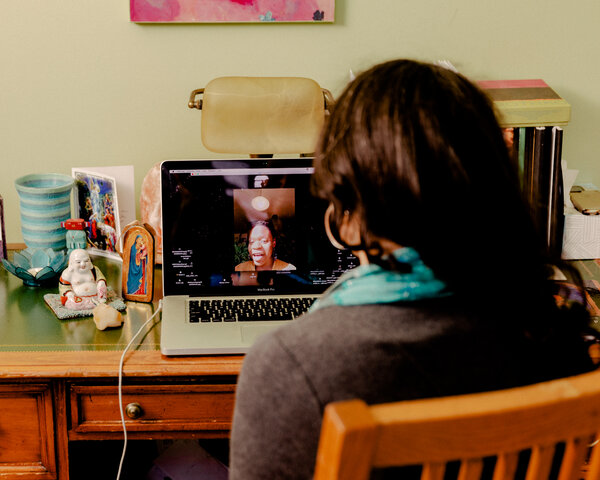 “Spiritual but not religious” is how 27 percent of Americans define themselves, according to a Pew Research Center survey from 2017. But one-quarter of American adults in an April survey from Pew reported that their religious faith has increased because of the pandemic.

For some seeking spiritual connection, this results in a hybrid approach. Alissa Ballot, 65, another of Ms. Pannier-Cass’s clients and a retired lawyer in Chicago, was already a member of a synagogue when a retreat introduced her to spiritual companionship. She has found greater self-understanding by writing poetry at Ms. Pannier-Cass’s suggestion, she said. Spiritual direction is helping her “become the me that God intended and created me to be.”

Lucinda Clark, a spiritual director in Charlotte, N.C., said that in her experience, more Black clients, including clergy members, are seeking spiritual direction after George Floyd’s death and the anger and protests that followed.

“That has been one of the main issues,” said Ms. Clark, 51. “‘How can I operate and work in my ministry in an environment that is unknowingly sometimes rejecting me and sometimes knowingly?’ And so, some people are coming because they’re hurt. They don’t know how to move forward.”

Ms. Clark, who completed a three-year spiritual direction program at Charlotte Spirituality Center, became a spiritual director after what she describes as “a dark night of the soul” in which she questioned certain ideologies in her church. She concluded that while she is rooted in Christianity, there are many paths to God.

When she came across spiritual direction in an internet search, “I was like, ‘That is it!’” she said. In her sessions, she often asks questions to help clients reflect on what they’re experiencing, from a hard day at work to a disconnection in their relationship with God.

Andrea Metz-Nicholson, 59, a spiritual director and one of Ms. Clark’s clients, believes the practice has given her greater self-awareness, an ability to voice difficult emotions, and a more intimate relationship with God. She has endured several family tragedies in recent years, and seeing Ms. Clark “just brought clarity,” Ms. Metz-Nicholson said. “It brought me peace.”

Others come to spiritual direction for guidance in reconciling their past faith with what they believe now, or merging their interfaith beliefs into a cohesive whole. “People are creating their own spiritual landscape,” said Summer Albayati, 51, a spiritual director in Orange, Calif., who describes herself as a Unitarian Universalist Muslim minister.

Rabbi Adam Lavitt, 38, in Providence, R.I., who provides spiritual direction for rabbinical students, a senior living community and individual clients, likes to bring creativity into his sessions through activities like art and writing. The more people take pleasure in the process, he said, “the easier it is for them to hear their life, their soul, speaking to them.”

Training can vary depending upon the practitioner’s faith background or educational preferences, but there are certificate programs through spiritual direction organizations and nonprofit ministries, including the Shalem Institute for Spiritual Formation in Washington, D.C.

The relationship between companion and seeker is an intimate one, and just as in any kind of counseling, it’s important for spiritual directors to maintain appropriate boundaries. Some spiritual companions, including Ms. Pannier-Cass, have degrees in social work.

Emily Malcoun, a clinical psychologist in Philadelphia who has worked with a spiritual director, noted that while therapy “can provide expert help with healing from mental health symptoms,” spiritual direction “focuses on your relationship with God or the divine” through prayer or reflection.

Some advocate for more accountability in the profession. Andree Grafstein, a spiritual director in Avon, Conn., described an incident of sexual harassment from a director about 40 years ago in an article she published last fall in Presence, a journal published by Spiritual Directors International. “I look forward to a day when the reality of a spiritual director’s sexual harassment becomes as visible as other forms of sexual abuse have become,” she wrote.

Since the article was published, Ms. Grafstein said she has received supportive emails from other spiritual directors. She is particularly concerned about the need to provide guidance and support for spiritual directors who learn that a directee has experienced harassment or abuse at the hands of another director.

Directees can be vulnerable, especially because, for some, rejection of organized religion or a former religious community is what brought them to a spiritual director in the first place. Kristabeth Atwood in Burlington, Vt., a spiritual director and former United Methodist minister, calls herself a pastor for people who don’t go to church. Most of her directees “just don’t resonate with being part of a traditional or formal religious community,” she said.

Others may be considering different denominations within their faith. Late last year Silas Bergen, 33, a statistics and data science professor at Winona State University in Winona, Minn., decided to leave his church after working with a friend who was training to be a spiritual director.

Mr. Bergen, who had previously played piano for his church and even helped lead worship services, began to feel more and more at odds with the church’s conservative beliefs and doctrine, though they were familiar to him from what he describes as his “evangelical-flavored” religious upbringing.

“I just began to feel this dissonance really strongly,” he said. Through what began as monthly virtual conversations in summer 2019, he explored what form of Christianity would be meaningful to him now. He plans to consider new churches when in-person visits are possible.

“Where have I been? Where am I at with whatever I’ve been experiencing?” Mr. Bergen said, describing his self-reflection process. “That encourages me to check in with myself, to maybe name the ways in which I’m noticing the divine in my everyday life.”