Care for a Cup of Satanic Chamomile?

As the world’s second most popular beverage (after water), tea has no shortage of devotees. But in the Western world, the way it is marketed often seems intended to target kindly old ladies, taut wellness gurus and well-heeled gourmands (in the market for a coffee substitute, perhaps).

The United States has a varied community of tea aficionados, of course, but the nation’s best-known tea magazine, TeaTime, is flush with recipes for lavender scones, advertisements for cozy murder mystery novels and reviews of heavily doilied tearooms.

Dominic Alvernaz wants to change all that. His small-batch, sustainably sourced loose leaf tea company, Pitch Black North, was founded in keeping with “Satanic values,” according to its website, and nurtured with copious doses of Scandinavian black metal, a musical genre.

Its dynamic, fair-trade blends have names like Satan’s Slumber and Throat of Lucifer; there are limited-edition blends with the Cleveland metal punk band Midnight and the British gothic black metal band Cradle of Filth.

“I’m trying to get people interested in tea who normally wouldn’t be interested in it, because they have these pre-notions that it’s only for strict tea ceremonies and pricey hotels and things like that,” said Mr. Alvernaz, 29, who is lives in Canada and has worked as a musician and a kitchen supervisor.

Of his own marketing, he added: “I’m pouring beet tea lattes all over myself like blood and we’re all half-naked with teacups.” 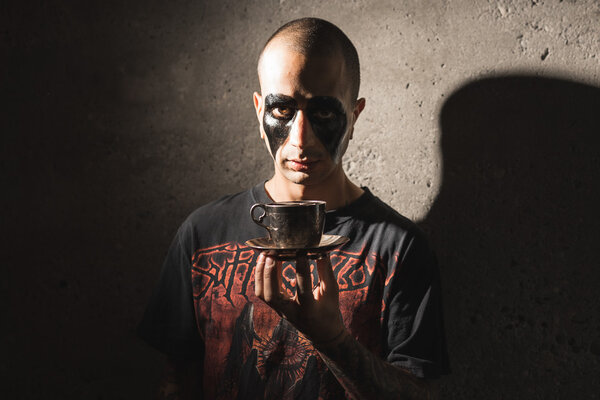 The tea itself comes from Mr. Alvernaz’s wholesaler, Sarjesa, which handles sourcing and packaging. He worked with the company to come up with two blends (a strong, malty classic English Breakfast blend and a delightful Vanilla Blueberry concoction, both composed of a mix of black teas from Kenya, India and Sri Lanka).

After reaching out over Instagram and sending over some samples, he got the band’s stamp of approval on both blends while Cradle of Filth was recording their new album earlier this year.

“It was an original avenue for a band to pursue, and on top of all that, being avid tea drinkers, we were totally enamored with the association and the ready supply,” Dani Filth, the band’s vocalist, wrote in an email. “After a long night of bloodletting and virgin defilement, what better way to perk up one’s morning (your dusk) than a really good brew?”

The end result has been selling like gangbusters on Pitch Black North’s website, according to Mr. Alvernaz. (It’s also available through one of the band’s online merchandise websites.) “The initial release, we saw very large sales volume and since we make it in smaller batches we have sold out a couple times but have been able to restock fairly quickly,” he said.

Pitch Black North is not the only boutique tea company to shrug off Victorianesque tearoom etiquette and embrace music and pop cultural aesthetics; it’s not even the only one that’s rock-music themed.

Brutaliteas, a horror-themed company in New Jersey, uses puns to name its tea blends (flavors include “Chai Put a Spell on You” and “Apricot for Destruction”), while vinyl-centric Craft Tea Guy, in Philadelphia, recently created a special Haunted Breakfast blend for the indie musician Sadie Dupuis.

Ivy’s Tea, founded by the herbalist Shanae Jones in 2016 in Laurel, Md., is also a music-genre-themed tea label, but its focus is hip-hop. “I am a firstborn American to British and Jamaican parents — tea is practically my blood type,” Ms. Jones, 32, said. “People that look like me are not included in tea advertisements, we’re not the market for tea parties, nothing, so I just decided I was going to change all of that.”

The most popular blends, including the spicy-sweet cranberry-hibiscus blend Red Bone and the ginger root-heavy Breathe variety, are often sold out, she said, as are her herb-infused honeys and sets of Trap China, tea ware that comes emblazoned with hip-hop lyrics and phrases like “Bad and Boujee” and “Money Moves.”

Subverting tea-drinking stereotypes in the West may come naturally to people like Mr. Alvernaz and Ms. Jones, but there’s more to it than that.

When all the black-and-white face paint has been washed off, Mr. Alvernaz is a good-natured metal head who loves tea and wants to share it with those who would otherwise be missing out. Ms. Jones is a healer who wants to uplift her community and break down the walls of an industry often associated in the West almost exclusively with white people.

The reverence with which tea has long been treated in Japan, China, India and so many other cultures is sorely lacking when it comes to the American palate, which is still barely acclimated to the British hot-tea-with-milk habit (let alone the brutal imperialist power grab that first led to tea’s proliferation across the globe).

But the market for tea here has been growing steadily; wholesale tea sales climbed to about $12 billion in 2019 from less than $2 billion in 1990, according to the Tea Association of the U.S.A., a trade group. Sales remain dominated by mass producers like Lipton and Bigelow, but independent tea brands are making strides, too. Henrietta Lovell, the Rare Tea Company proprietor and tea evangelist who supplies Claridge’s in London and other high-end dining rooms, said in an interview that her brand’s second-largest customer base is the United States.

What does the success of these unorthodox spins on an ancient beverage say about the future of the industry? For Ms. Jones, it’s about “moving to an inclusive, holistic and welcoming world where differences are celebrated.”

“For those who don’t want to see the world change, they better get with it or they’re going to be left behind,” she said. “We’re not waiting for them.”