Crossing Paths Until They Became a Couple

Even with a population of nearly 700,000, Washington can still seem like a small town, as Dr. Noemie Levy and Graham Gottlieb discovered.

The two met in March 2012, outside a yogurt shop at 10 or 11 p.m., when a close friend of Dr. Levy, who was also a grade-school friend of Mr. Gottlieb, waved him over to say hello and then introduced them.

Their connection was immediate. “We both developed a crush instantly from the first time we met,” Dr. Levy said, adding that she felt at ease with him right away. She laughed so hard at his humor, she said, that her face hurt and was absolutely certain that she wanted to spend all her time with him.

Both were working at the White House during the Obama administration, though they never crossed paths professionally — she was an intern for the Domestic Policy Council and he was a staff assistant in the Presidential Personnel Office.

But day after day they kept bumping into each other throughout the city: at Swing’s, a coffee shop that draws its share of White House staffers; at G Street Food; and at Lafayette Park.

“It got so we’d say ‘See you tomorrow!’ when we ran into each other,” Dr. Levy said.

“That really was not hyperbole,” Mr. Gottlieb said. “It suddenly, literally, became every single day.”

Around the time that he planned to return to New York, where he grew up, to start a post-baccalaureate certificate program in social psychology at Columbia, and just at the time when her internship concluded, the two finally had a first date. 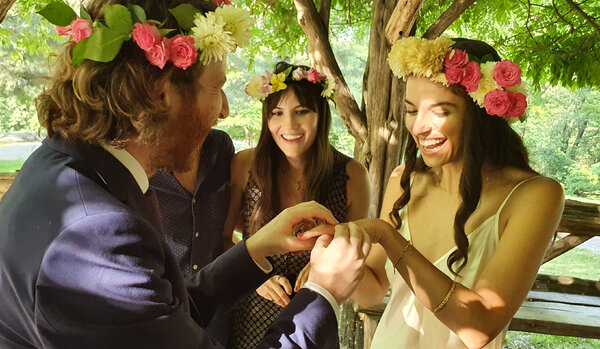 They met for drinks at the Tabard Inn, a 100-year-old hotel near Dupont Circle that is made up of three Victorian townhouses. Up on the roof, overlooking the city that had brought them together so many times, their relationship transformed.

“I kissed him and he kissed me back and that was that,” said Dr. Levy, who graduated from Rice University. “We were just really good friends and then suddenly we were together.”

When he moved back to New York, weekend bus rides and then train rides between the cities kept their relationship flourishing.

“There wasn’t a sense of concern,” said Mr. Gottlieb, who graduated from Princeton. “It was like, yeah, we’ll make it work.”

And they did. Five years went by. She applied to medical school and was accepted at Stanford, and he did one more quick stint in Washington, this time with the Agency for International Development, as it wrapped up operations in the Obama administration’s final days.

Then he moved to Palo Alto, Calif., to join her.

Two years ago, having concluded years before that they were in a forever relationship, they determined that after Dr. Levy’s graduation from Stanford would be the right time to marry. She is to begin her internal medicine residency at the Brigham and Women’s Hospital in Boston. He is now a founder and the executive director of a Palo Alto organization, Mind the Gap, that works to encourage Democrats to vote.

On June 6, Marcy S. Friedman, a retired New York Supreme Court justice, officiated virtually at the Warwick Hotel in New York. The couple also had a ceremony at Cop Cot, the vine-covered rustic structure in Central Park, with their immediate family members.

Both said that they realized at their very first encounter that they were well suited to each other, and after they had their first kiss, their relationship evolved naturally.

Even if they did soon have to take over the work of making their encounters happen themselves.

“There was this sense that once it shifted into a romantic relationship, it was like, Oh yeah, this will likely be forever,” he said. “She has this combination of deep, casual warmth and electric, alive intelligence and wit. That’s a pretty captivating combination.”