HELL hath no fury like a woman scorned – and a woman with a bottle of bleach to hand.

One TikTok user found herself being slammed online after revealing she got her own back on her boyfriend, who failed to come home from the pub, by destroying his clothes in the bath. 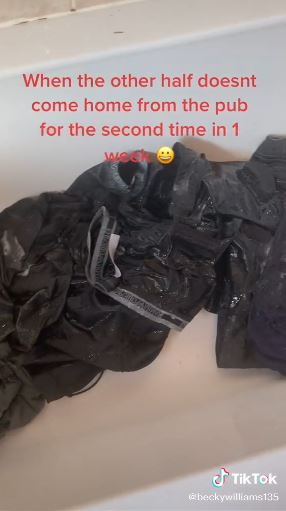 Furious with her partner for not coming home for the second time in one week after heading out for a drink, the girlfriend decided to teach him a lesson by grabbing a bottle of bleach and pouring it all over his stuff.

She pulled together his clothes, including jeans, boxers and tracksuit bottoms, threw them in the bath and then went to town – completely covering the clothes in bleach before pouring hot water on top.

The woman captioned her video: "When the other half doesnt come home from the pub for the second time in 1 week (sic)."

She added: "Hope you like your upholstered clothes babes #f**kedup #absoluteclown #fyp." 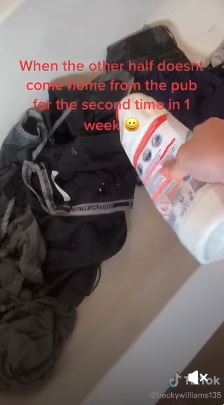 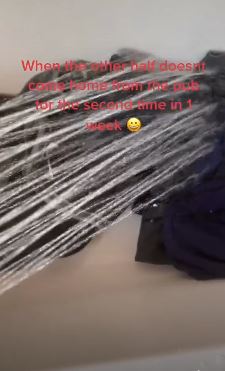 Hundreds of people were seen commenting on the video, with the girlfriend's revenge plan leaving everyone divided – with some slamming her and calling her "cruel".

"Please tell me you didn't really do this," said one person, while another commented: "I mean… I'd rather leave than act like a crazy person."

A third wrote: "Nah this is s***. Imagine a man doing this to a woman's clothes, there would be uproar. If you're not happy leave."

One person said her bleach bath was "absolute savage," while another joked: "That's so mean… now do his tops."

Some women were seen showing their support after going through similar, with one person adding: "Been here many times drives me mad… it's the fact they say [they are] coming home and don't totally different story if we do it though."

Another suggested: "Hear me out. Next time gorilla glue and glitter."

Meanwhile, one woman reveals how she found out her boyfriend was cheating when his other girlfriend saw a photo of them together on TikTok.

Plus, one scorned girlfriend decided to redecorate her cheating boyfriend's room with all the text messages he'd sent other girls.

And one cheater terrified of being busted by his wife leaves repairman note begging him not to fix his phone – and still pays $200.