A ghostly mansion inside The Shed: Boxwood hedges and desiccated urns filled an ersatz formal garden constructed in the performance space of Hudson Yards, the elaborate real estate development built on the Far West Side of Manhattan just before Covid-19 hit and which has stood as something of an empty monument to prepandemic dreams of grandeur and greed for the last two years.

Dotted among the faded greenery were 20 frozen figures, each encased in a rosebush carapace. In the center was the frame of a library, populated by two wingback chairs, a bottle of Champagne chilling and a pair of bachelors in gray flannel dresses padded into exaggerated turn-of-the-20th-century S shapes. Two men riding penny farthings appeared wearing mesh horse heads and short suits, all in gray. Then the statues rose up as one, dropped their cloaks and began to walk. Thus began Thom Browne’s show, his first in New York since leaving the city for Paris Fashion Week in 2017.

For two decades now, there has been something surreal about sitting through a fashion show (or many fashion shows) on Sept. 11. This year it felt especially so, when practically everywhere you looked there were memorials and homages to the fallen and the significance of the moment — except on the runway, filled with dreams and future. It’s both jarring and dislocating; proof positive, it often seems, of an industry’s vain self-absorption. 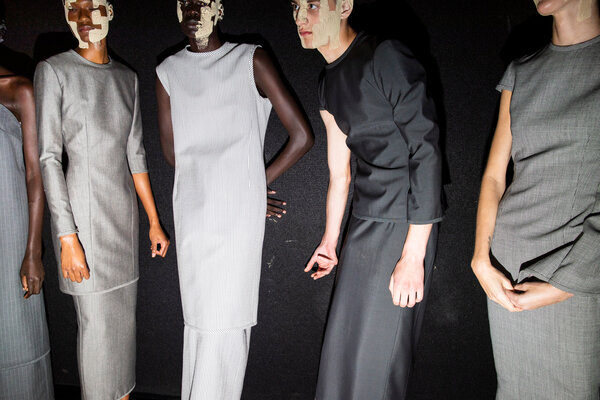 Yet fashion and Sept. 11 are irrevocably linked, because of time and history, with the attack occurring just as New York Fashion Week began, and because the events that moment set in motion shaped what came after. Literally, when it comes to clothes, and the needs and emotions to which they respond. Not that most designers put it that way, exactly.

Instead, Mr. Browne, speaking from a microphone in the darkness, asked the audience to take a moment of silence before his show to acknowledge the significance of the date. Then he name-checked a 1962 short story by J.G. Ballard titled “The Garden of Time” and unveiled a collection in three acts.

First, his trademark ode to the four pieces of the tailored gray suit (vest, jacket, trousers, skirt) in pinstripes, Prince of Wales check and seersucker, remixing the combination for each look, like the twist of a Rubik’s Cube. Next, a meditation on proportion and the power of subtraction, layering austere tunics with mismatched sleeves (sometimes sewing one to the body, rendering it disturbingly immobile) atop maxi skirts.

And finally, a rainbow of what looked like the simplest T-shirt dresses silk-screened to mimic the drapery of Greek and Roman statuary and worn, once again, by living statues, both male and female (though on Mr. Brown’s runway, as on many this week, gender is beside the point). Only the dresses turned out not to be printed at all, but rather trompe l’oeil masterpieces built from layers and layers of tulle, each one containing hand-pieced and appliquéd shadows, like a topographical map of memory.

There was an elegiac quality to the work, with its excavations of American idioms from the midcentury. Amid the somewhat frantic optimism of the return to in-person shows, it resonated.

Mr. Browne wasn’t the only designer whose work seemed infused with wistfulness and a sense of the once-was.

(Nor was he the only one influenced by the Met’s Costume Institute focus on Americana. At Coach, Stuart Vevers took his cues from Bonnie Cashin, the earliest Coach designer, in an unfortunately insipid skate wear-inspired mélange of oversize anoraks atop baggy shorts and under-kitschy logo tees celebrating New York consumer landmarks. It was not made any better by the screening of the “Coach TV” fashion film starring Chaka Khan, among others.)

Jason Wu smudged dried flowers into relaxed dresses and separates in the best work he has done in seasons. Kate and Laura Mulleavy held their Rodarte show in the sculpture-festooned courtyard of the Westbeth Artists Housing complex, with black-and-white slip dresses trailing fronds of lace that caught just so in the breeze, neon-bright fringed frocks in constant motion and mushroom-printed silks looped up behind to billow like parachutes in the wind (plus one eye-popping black cape embroidered with a sequined image of an alien, complete with U.F.O.).

At the end, the models appeared barefoot, in matching silk dresses in shades of cream, from ivory to gold to shell pink, like a host of earth angels. Or a cult, depending on your point of view.

Still, no one captures the sense of dislocation and coming undone and then turns it into a source of strength better than Mike Eckhaus and Zoe Latta of Eckhaus Latta. They deploy the comforts of ribbed knits like a rug that can be pulled out from under you; drop straps and fake out expectations of what constitutes a pair of pants or a dress; strew snaps along the curving seams of stretch tops and trousers; and then un-pop the poppers in unexpected places to expose a thigh here, an armpit there, confronting and celebrating the sheer fleshiness of it all.

The Body Positive and Other Trends

“People want to show off their bodies,” said Michael Kors, which is another way to think about the question of corporeality — a means of affirming presence in the world. Mr. Kors just does it with a lot of decorum and a show tune rather than EDM. Shown at Tavern on the Green, to live accompaniment from the Broadway star Ariana DeBose, Mr. Kors’s collection was full of dropped necklines and exposed waistlines, lacy circle skirts and bra tops. Indeed, the exposed midriff is turning into one of the trends of the week. (Brandon Maxwell embraced it, too, replacing shirts with bikinis under trouser suits made for a pink and green picnic party).

So, for that matter, are shows staged in restaurants; see Batsheva’s subversively sweet Priscilla Presley party girls in moiré and velvet at Serendipity 3, and Anna Sui’s tropical tourist, luau mash-up at Indochine. Also gingham and, in a welcome development, the presence of differently abled models on the runway.

And while Thom Browne may be the dean of fashion dramatics, Rachel Comey had a production all her own. Eschewing her usual friends ‘n family dinner theater, she enlisted the choreographer Beth Gill for a “20th anniversary show,” a swarming melee of individuals running, embracing, engaging in clothing swaps, melting off desk chairs, stripping down and otherwise interacting in looks that included graphic printed dresses, elegant black jumpsuits, twinkling culottes and crafty artist’s smocks. It was messy and confusing and frustrating (Where to look first? What did I just miss?) and kind of great.

Because really, it looked like life. In the best possible way.