THERE'S nothing more painful than losing a loved one and we all have different ways of dealing with our grief.

Here Fabulous meet three women who did extraordinary things after the loss of a loved one, from changing careers to weightlifting and even climbing Everest.

‘Giving birth to Alice was the best thing that happened to me, leaving hospital without her was the worst’

Clare Worgan, 38, is a student midwife and charity worker, and lives in West Sussex. 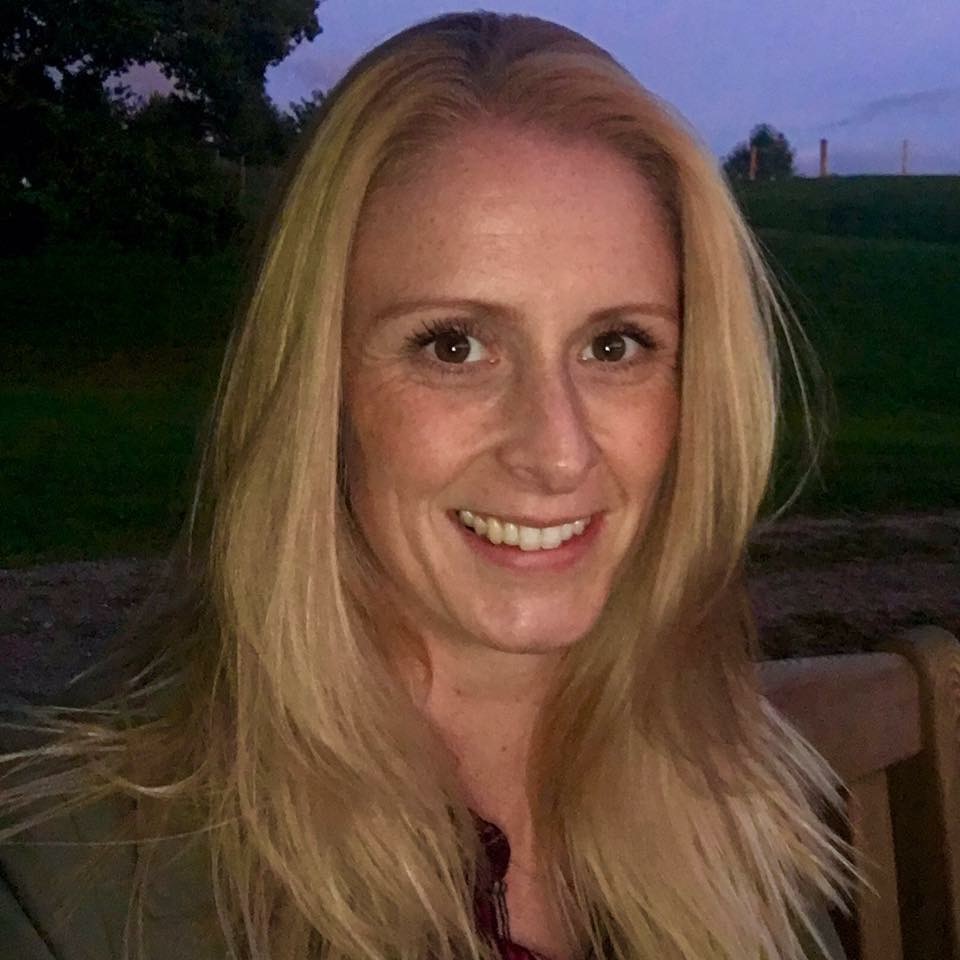 “Holding my beautiful baby girl in my arms, my heart burst with love. She was
perfect, with auburn hair like mine.

I wanted to stay like that with her forever, but I knew I couldn’t, because Alice had been stillborn after becoming entangled in her umbilical cord.

When I discovered I was pregnant in December 2015, my then-partner and I were so excited.

We found out we were having a girl at our 20-week scan and named her Alice. I’d had an early miscarriage the year before, so I was also anxious about the pregnancy.

All I remember is the room closing in on me as I sobbed.

I went into labour at 39 weeks and was taken for an ultrasound scan at the hospital. When the sonographer told me there was no heartbeat, my world caved in. All I remember is the room closing in on me as I sobbed.

Although my baby was dead, I still had to give birth. The labour lasted all day, and throughout, I had a supportive midwife by my side explaining everything that was happening which really helped.

My partner and I stayed with Alice in hospital in a private room, where I washed her, dressed her, read to her and took photos with her. It’s those precious memories that continue to get me through the toughest times. 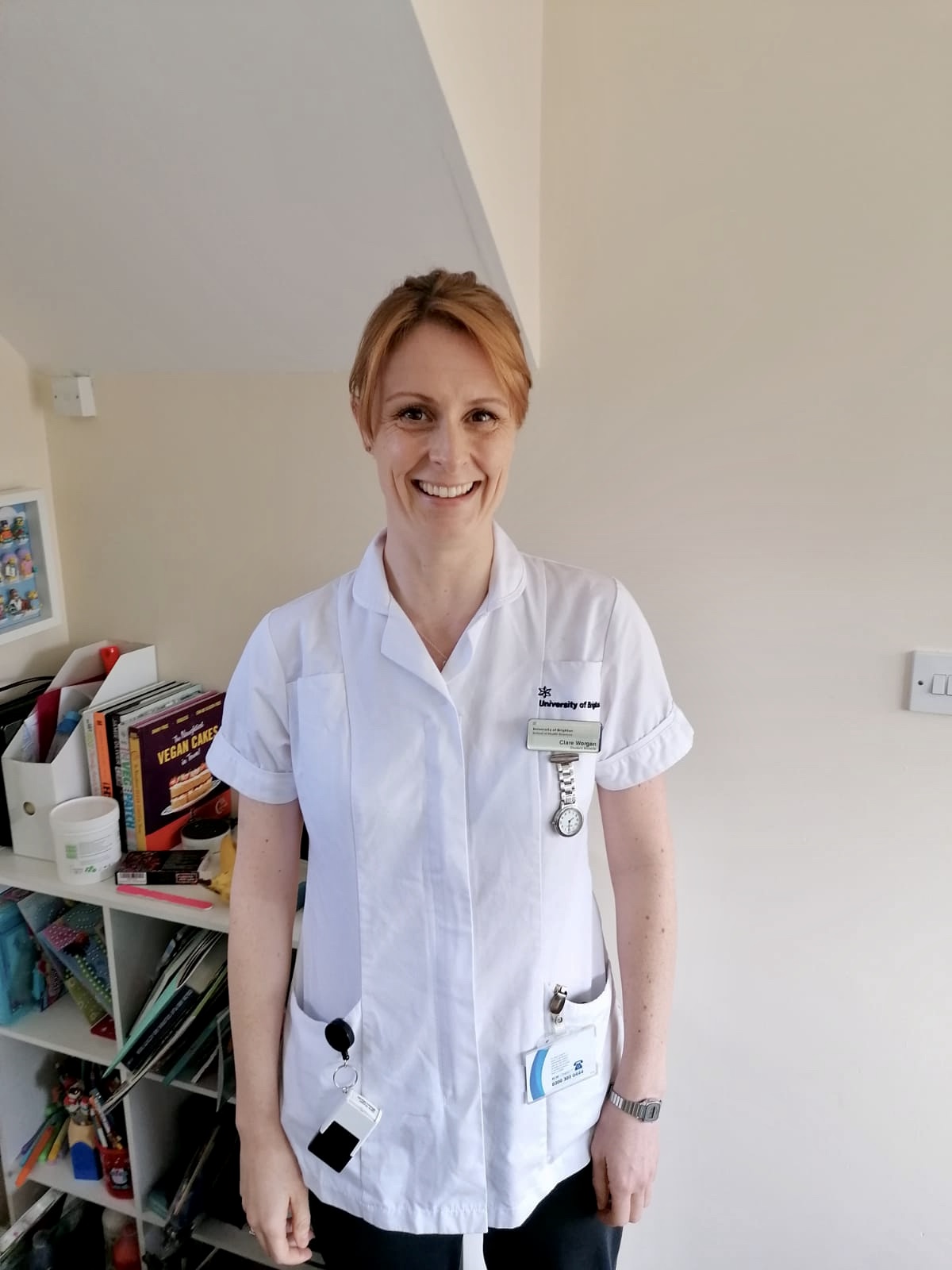 Three days later, we left the hospital with a memory box instead of our baby. It was heartbreaking. In the early days, organising Alice’s funeral gave me a purpose. I wanted to make sure the readings and songs were perfect.

On the day, I read a poem I’d written, telling her how much I loved her. But after it was over, I felt lost. We’d had amazing support from family and friends after Alice died, but when everyone went back to their own lives, there was a huge hole where our baby should have been.

It was then that I decided to quit my job in civil engineering and retrain as a midwife, inspired by the incredible support I’d had. Those midwives were my heroes, so it just felt right.

Taking out a student loan to pay for my fees, and living off savings, I started my training in September 2017 at Brighton University and instantly loved it. Midwifery gave me something to hold on to when I felt like I had nothing else. It meant Alice was always with me, because my new job would always relate to her. 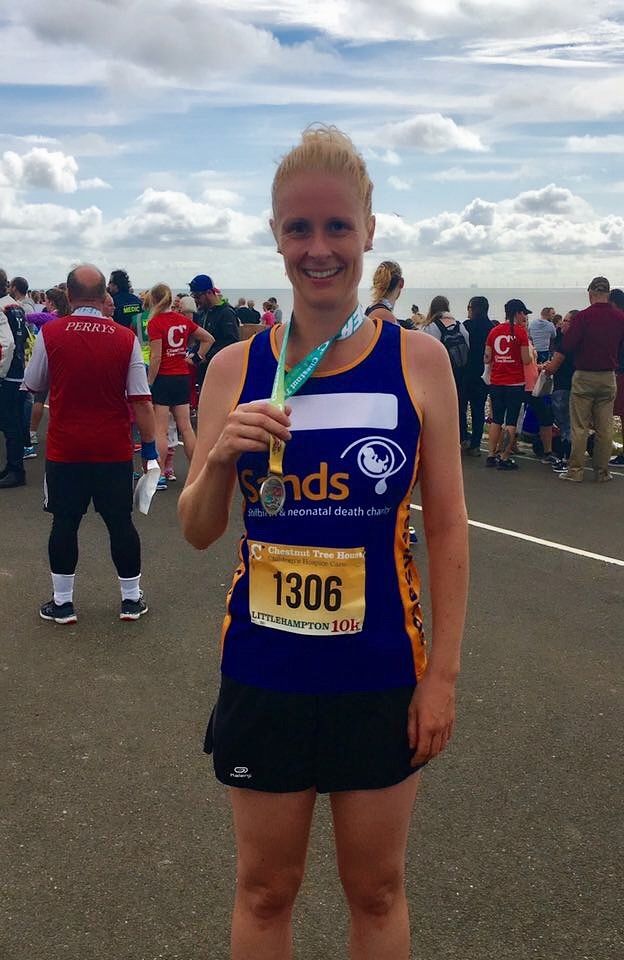 I experienced my first birth as a midwife a few months later, and it was an incredible moment. Some people might wonder if I found it hard, but I have warm memories of the delivery suite because that was where I met my daughter. Being there felt natural.

I’ve just completed my second year of training, during which I’ve cared for 14 mothers and babies, and supported countless families. I’ve recently decided to defer the third year of training to work for stillbirth and neonatal death charity, Sands.

My role is bereavement care training for maternity staff. This means I get to use my experience to support both midwives and bereaved parents. I feel proud that Alice’s life is making a difference.

Giving birth to Alice was the best thing that has ever happened to me, but having
to leave the hospital without her was the worst moment of my life.

Now, I take one day at a time. I don’t know what the future holds, but I’m determined to make the most of life for both of us. An awful thing happened to me, but midwifery has taught me that there’s hope.”

‘Weightlifting was my only respite when mum died’

Natalie Weaving, 38, co-owns a marketing agency and lives in Basingstoke,
Hampshire, with her son Alfie, eight. 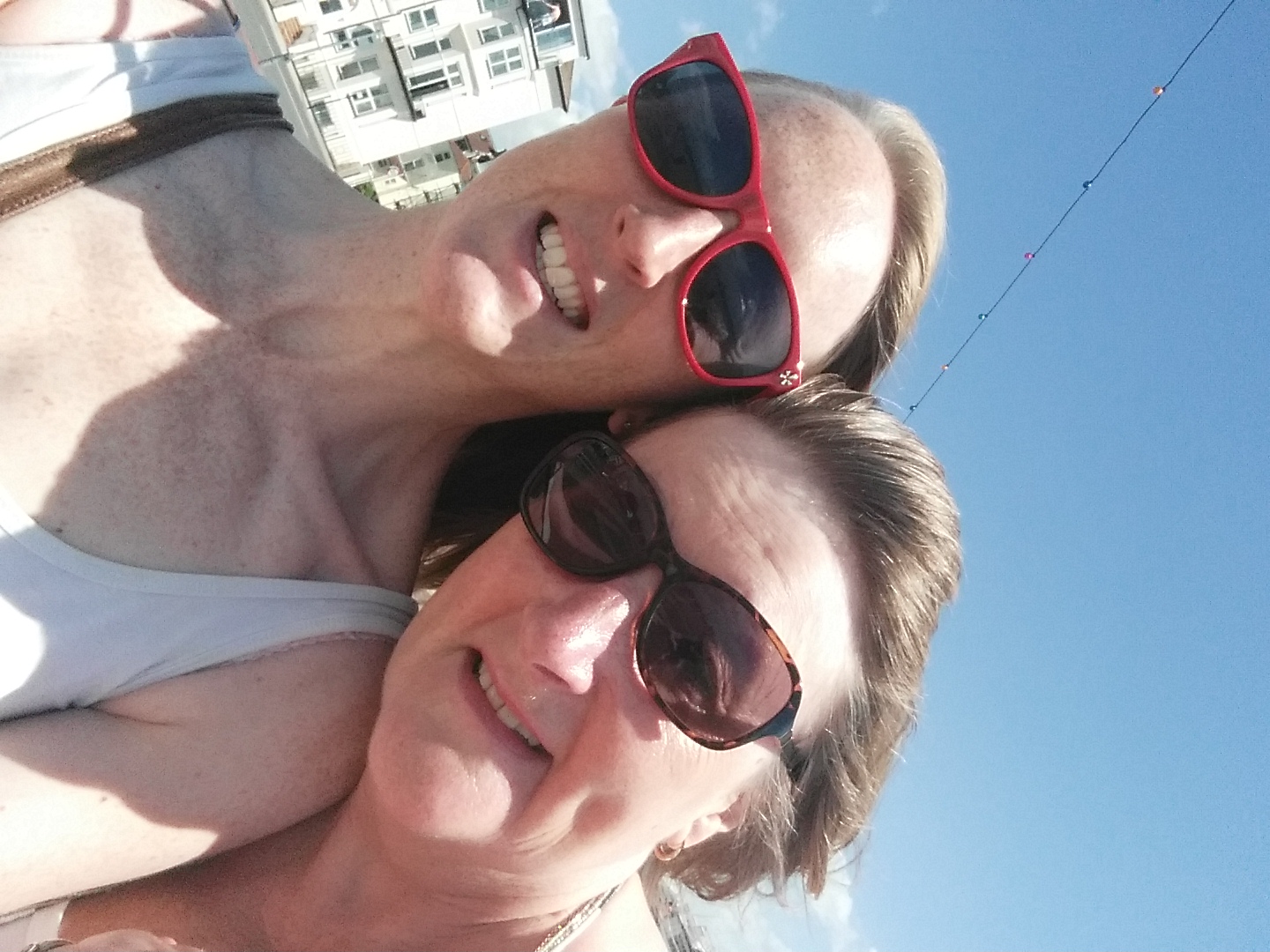 “Sweating as I lifted a heavy weight in the gym, all I could think about was the burning feeling coursing through my arms. Then, as I put the weight down, satisfaction washed over me.

The truth was that my mum, Debbie, was dying of cancer and the endorphins I got from weightlifting was my only respite from the mental pain.

Generous, kind and funny, Mum was my best friend. When I was little, she was always there to take me to netball or ice skating, and as I grew up, we got even closer, going to the cinema and on shopping and spa trips.

I was devastated when Mum was diagnosed with lung cancer in September 2013. She was given just six months to live. Initially I went into shock, but I knew I had to be brave, especially for my son Alfie, who was 18 months old at the time. Mum was in shock, too – her diagnosis was so out of the blue. 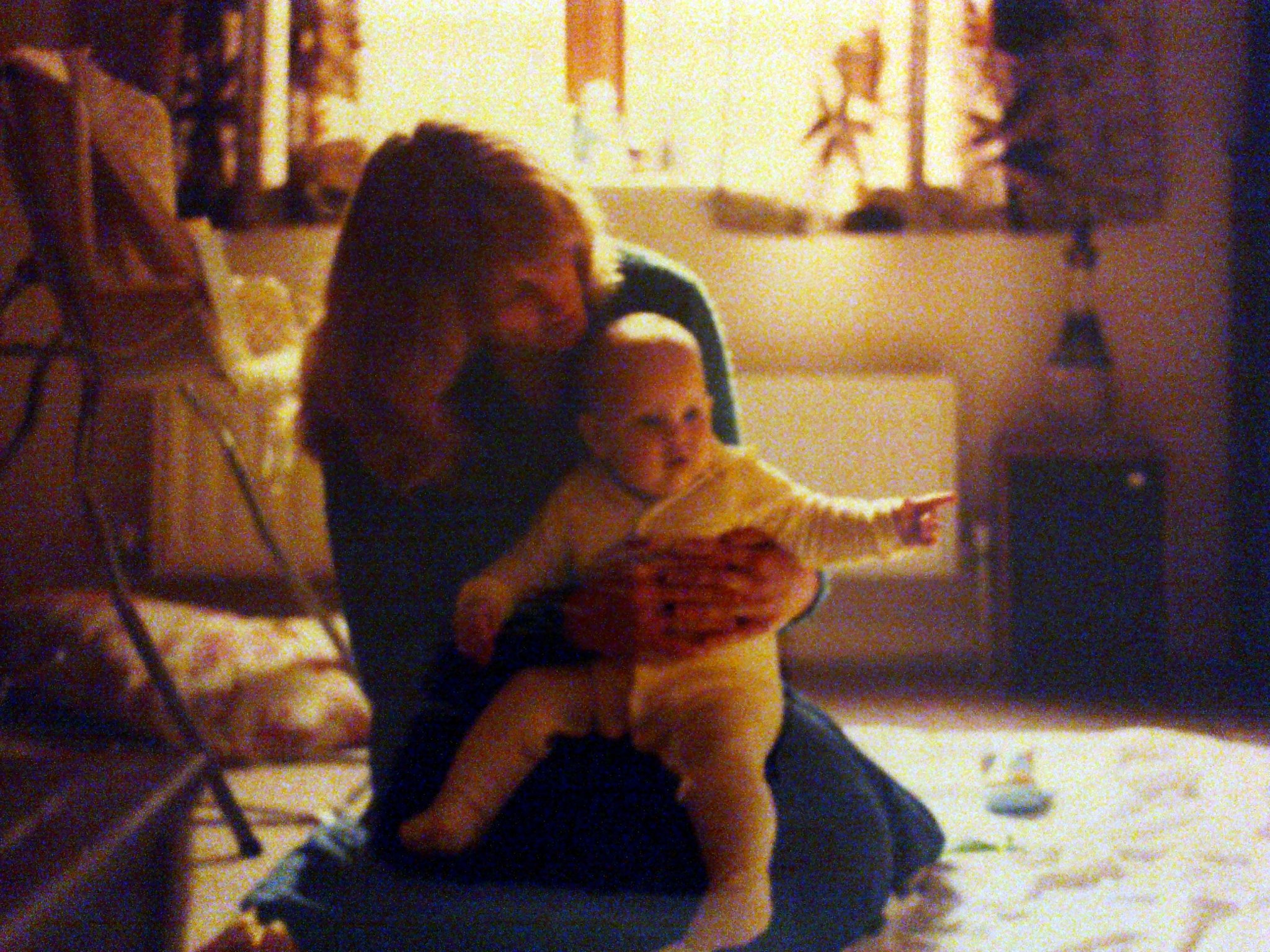 However, she continued to defy the odds and fight the cancer, but by December 2016, she’d started to get weaker. I was terrified, but I took steps to ensure that I’d be in the best place possible to deal with her death.

As well as seeing a counsellor, in April 2017 I also took up weightlifting, which I’d done a bit of in my 20s. I loved how powerful it made me feel and how the endorphins gave me a boost.

So I made a pact with myself to get physically – as well as mentally – strong. I began personal training with the Strongest Woman in the World 2018 lightweight category winner Farah Fonseca every two weeks, plus I trained alone twice a week.

It was tough and to begin with I was sore, but I went from deadlifting 70kg to 140kg within six months. Weightlifting was a real escape from my grief during Mum’s illness, and it was the only time that my mind cleared and I was able to forget about what was going on. 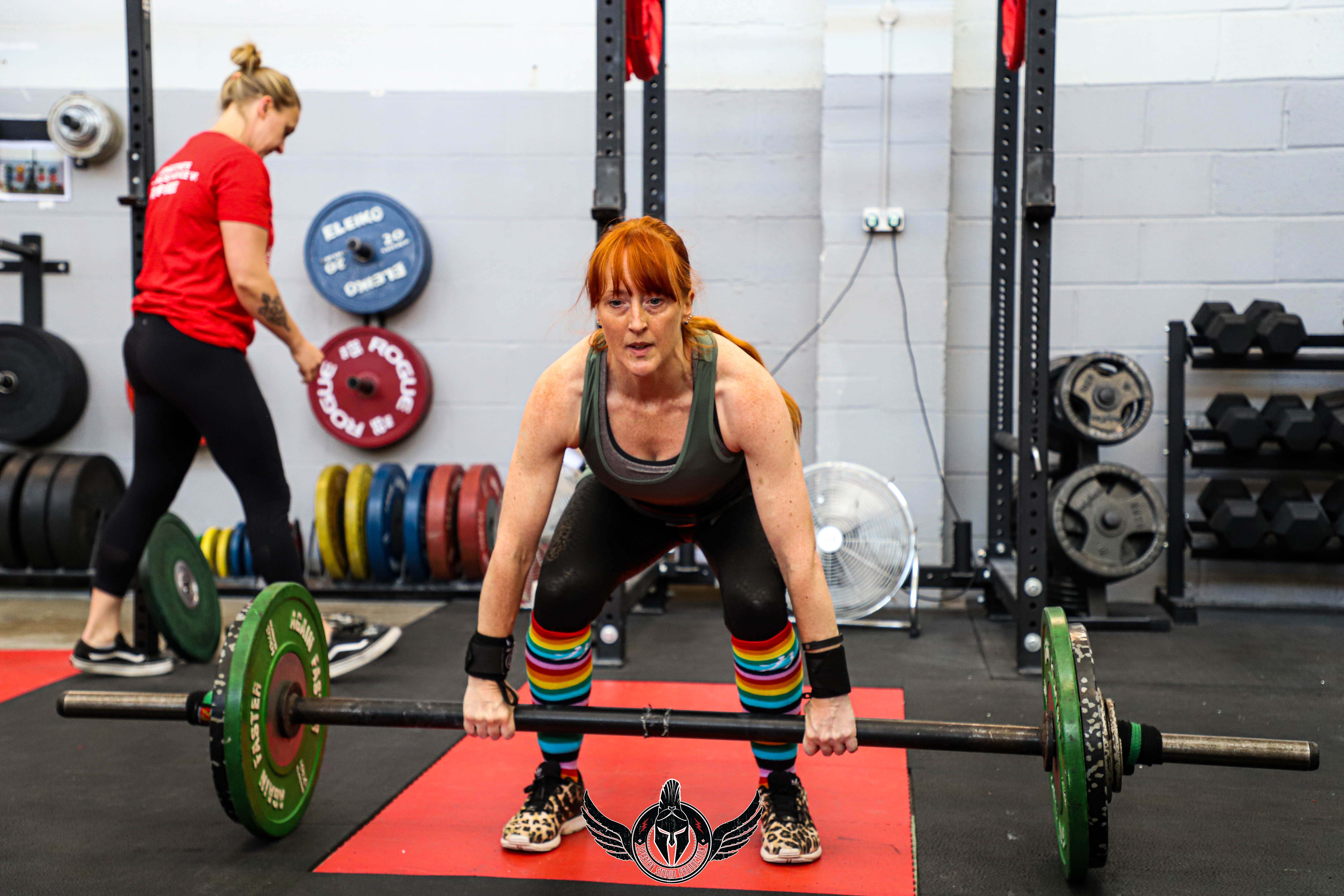 I found that if I felt physically strong, I felt mentally stronger, too. Mum used to joke that I would put my back out training, but she just wanted me to be happy, and seeing → me getting on with my life was important to her.

When Mum died in April 2019, aged 63, my heart shattered. She knew the end was coming and she was very accepting of death. It might sound bizarre, but I even trained the morning after Mum died. It was hard, but it gave me a break from the pain, just for a few hours. I took my emotions and processed them physically.

Mum’s funeral was a true celebration, with people telling stories about how she’d make them laugh. Colleagues at the supermarket where she worked handed out her favourite iced buns in store. At her funeral I came up with the idea of a hashtag, #bemoredebs. It’s a mantra I live by today, posting it on Instagram or in WhatsApp chats. 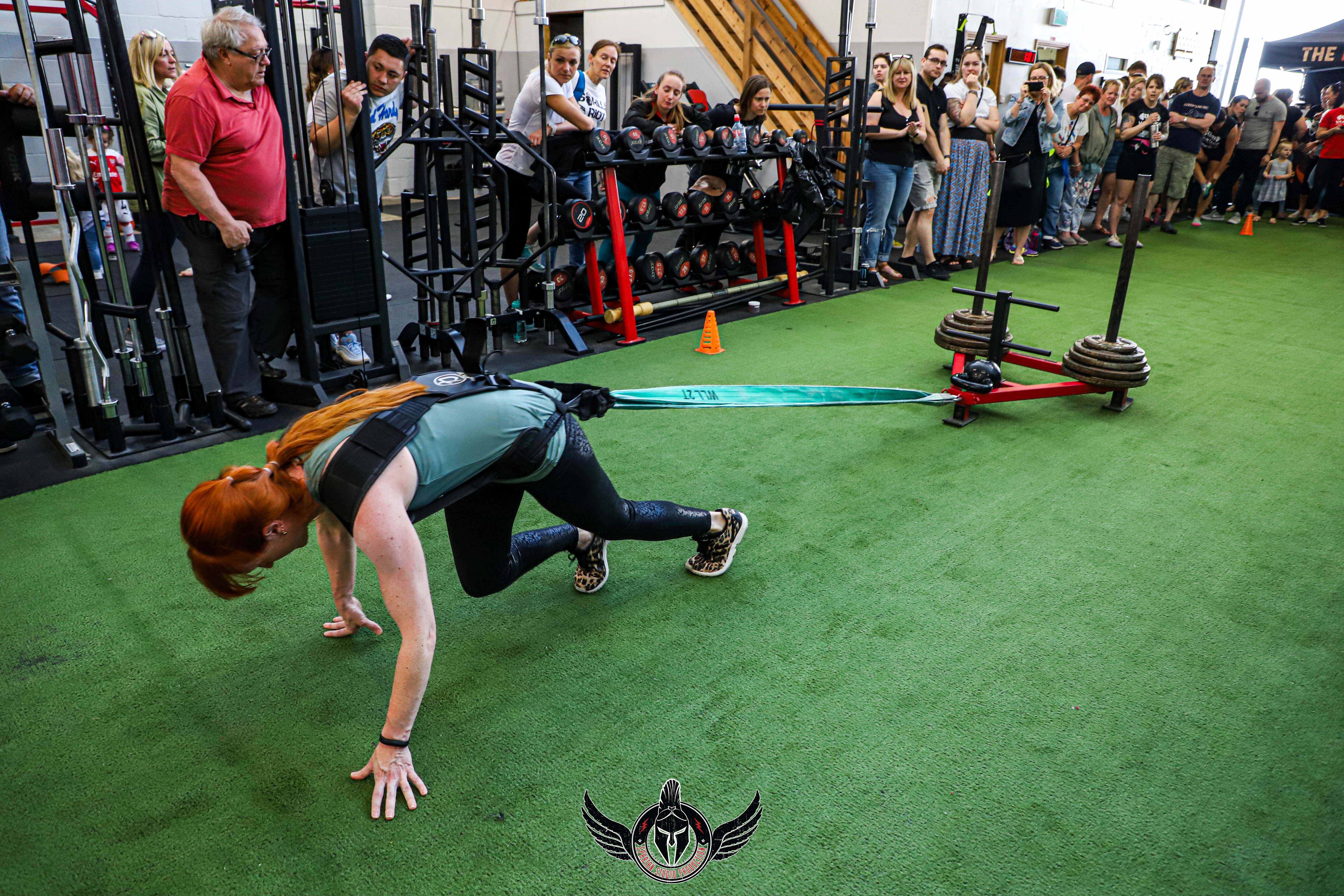 The gym has become a safe space for me. There, nobody knows that I’ve had a bereavement, and people talk to me without looking concerned. It allows me to escape my grief and it triggers endorphins, which helps me process my emotions more easily.

My heart broke the day Mum died and I’m still trying to put it back together, but by channelling my energy into weightlifting, I know It will help me prepare me for any bad days. They’ll hurt, but it will be OK.”

‘I climbed to Everest Base Camp in my husband’s memory’

Michelle Laverick, 46, works in marketing and lives in Hampshire with her
daughters, Lily, 15, and Ruby, 13. 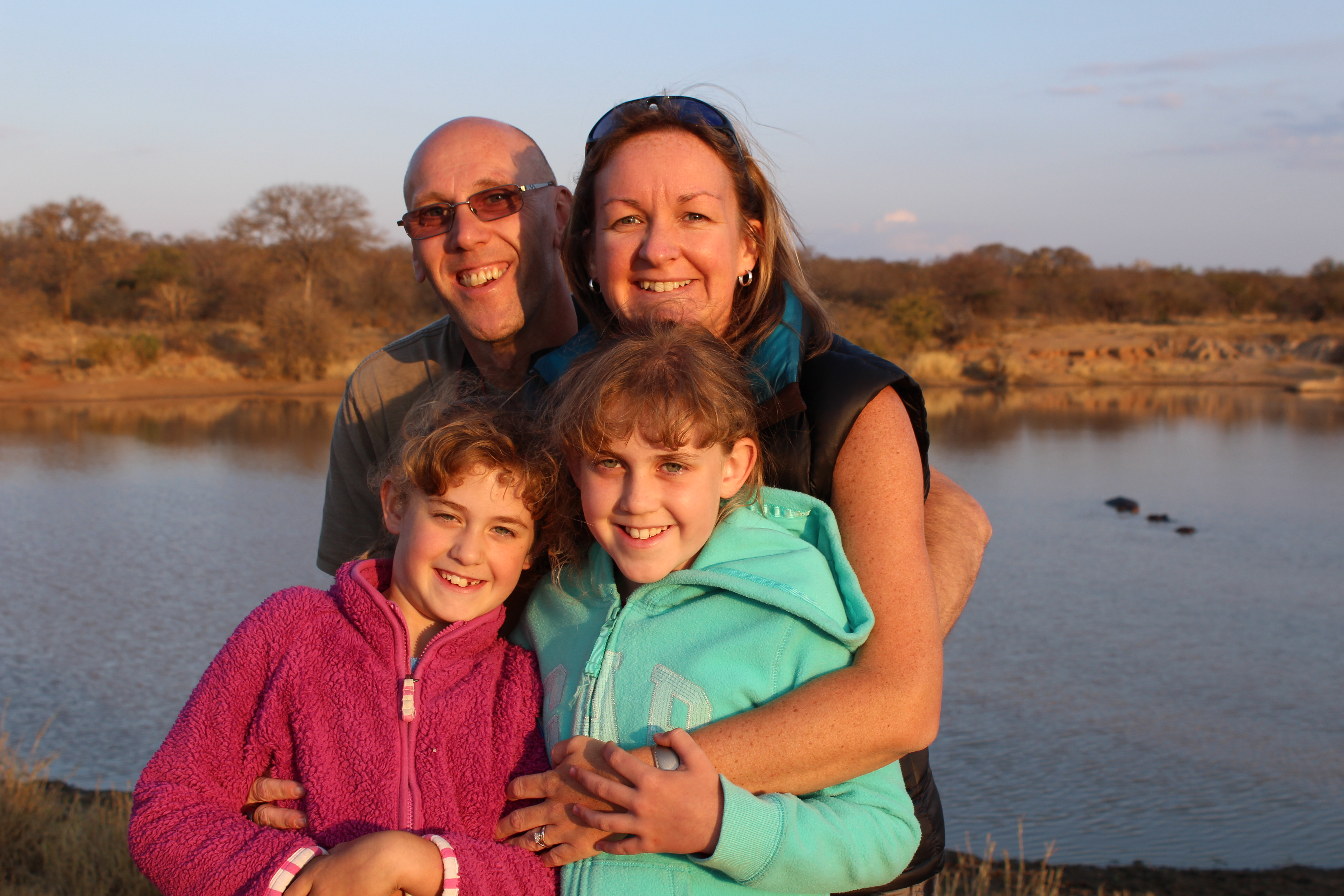 “Looking out across the peaks with my girls, I had the strongest feeling that my husband Martin was standing beside us. I just wished that he could have been there with us at Everest Base Camp, feeling the same overwhelming sense of achievement.

I first met Martin in October 2000 when I was 27, during a three-week holiday trekking in Nepal. He was down-to-earth and funny, and we shared a passion for hiking.

We hit it off and began dating a few months later. We married in October 2002 and went on to have two wonderful daughters.

Walking and hiking was at the heart of everything we did and we got the girls involved from a young age. It was our way of spending family time together, and we’d take walking holidays to the Lake District. As the girls got older, we often talked about wanting to trek to Everest Base Camp together.

When someone is ripped from your life so suddenly, you feel as though you’re in a whirlwind.

So in spring 2017, we decided to make the dream a reality, booking the trip for the following March. Sadly, Martin never got to fulfil that dream.

It was during one of our regular family holidays, in August 2017, that Martin tragically fell, hitting his head on a rock.

Witnesses called Mountain Rescue, but they weren’t able to save him. He died aged just 54.

I instantly felt numb and my daughters were devastated. When someone is ripped from your life so suddenly, you feel as though you’re in a whirlwind. 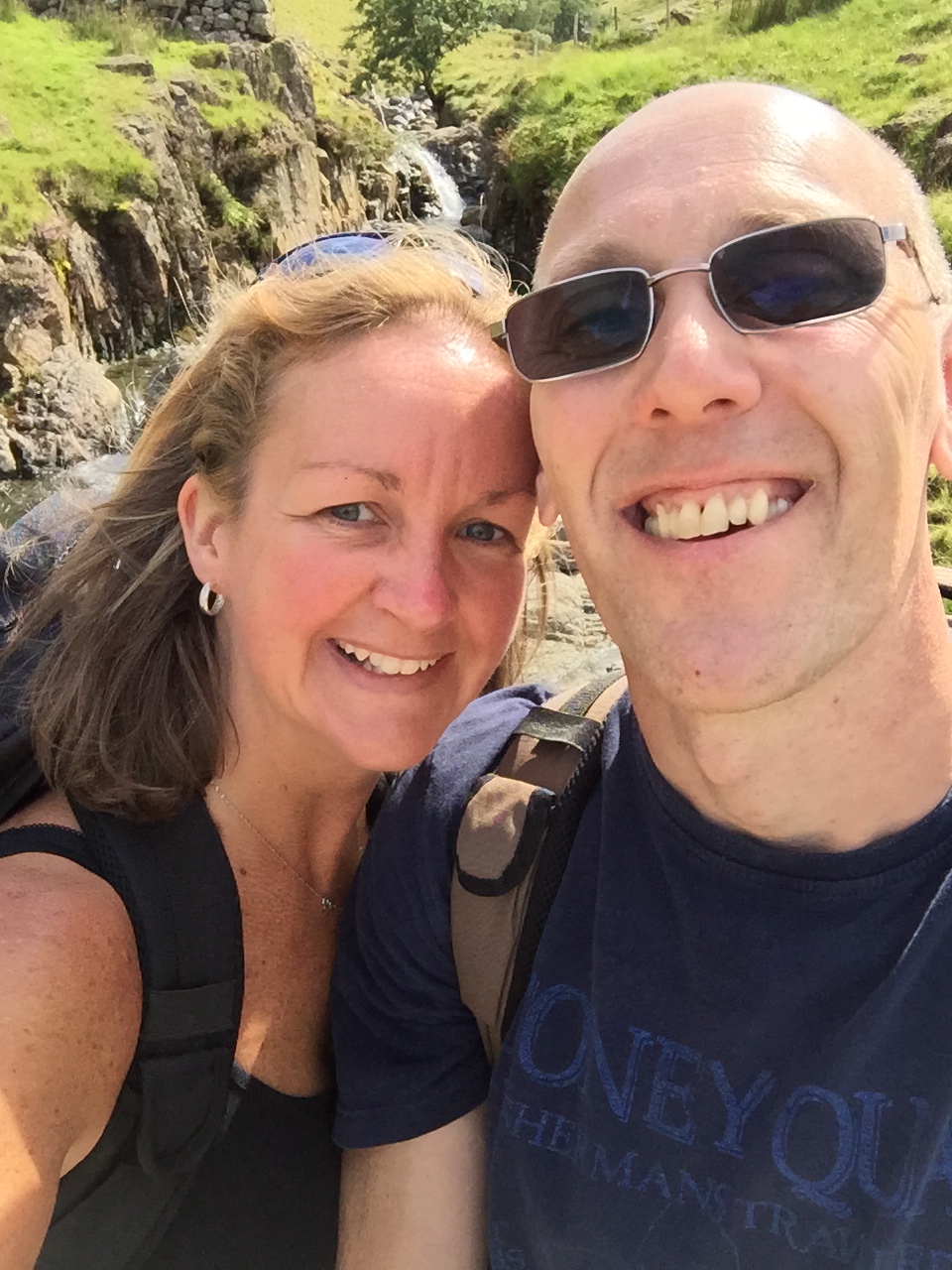 People were telling me how to organise a funeral, and I was thrown into a world I knew nothing about. I buried a lot of my emotions as a way of coping.

Thinking hurt too deeply, so I tried not to. I also had to be strong for my daughters. I had to keep going. I don’t think you ever really get over grief, but you try your best to move forwards.

I was determined that the girls and I should create new memories that kept Martin’s passion alive. The Everest trek was something we’d committed to as a family and we all wanted to go in Martin’s memory. 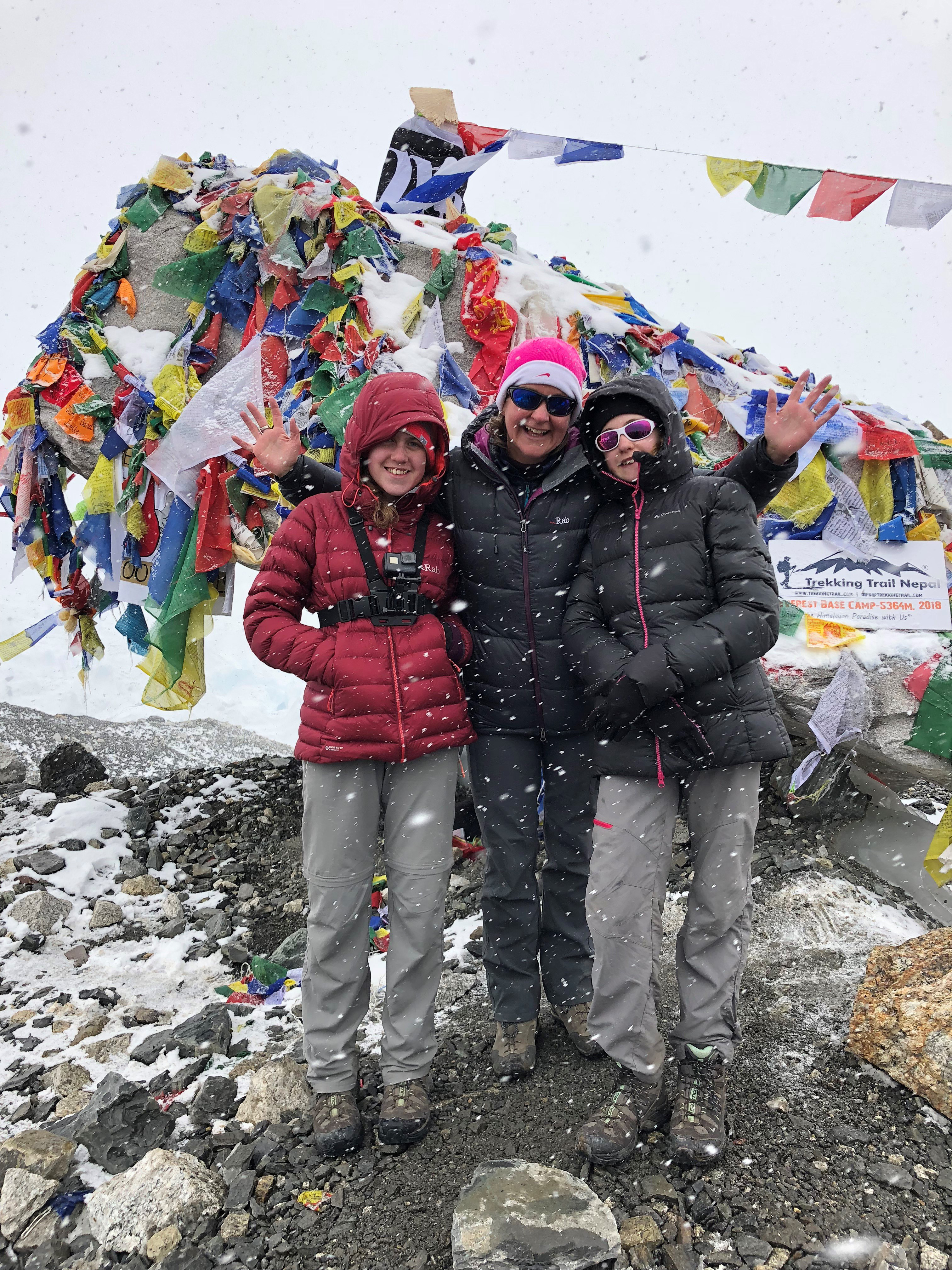 So in March 2018, we set off on the 12-day trek to Base Camp at 17,300ft. Although it was hard, it was an incredible journey through stunning scenery. I felt close to Martin when I was there, as it was where we first met, and we talked about him each day.

The trek helped me see that it is possible to move forwards with grief. It has given me confidence that I can continue to do the things that Martin and I used to do together.

Since our Everest trek, the girls and I have hiked the Inca Trail in Peru, and last
August, we climbed Mount Kilimanjaro together.

Having a shared passion for this sort of adventure has helped us process our grief. And it gives me such comfort knowing how proud Martin would be.”