Joey King detailed the amount of work that went into her VMAs look: ‘I don’t really look like this’ 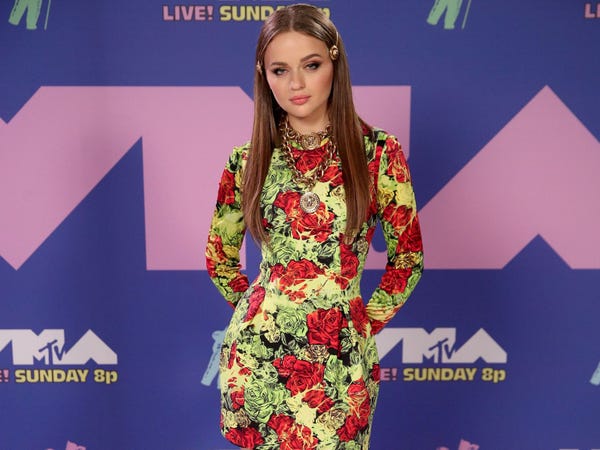 Joey King said it took a lot of work to achieve her red-carpet look for the 2020 MTV Video Music Awards, which aired on Sunday.

During the event's pre-show, King spoke with musician Travis Mills about how she prepped for the awards ceremony, according to Glamour. She told Mills that though others might not realize it, she was wearing fake hair, body makeup, and "a lot of Spanx."

"I'm wearing Versace. My first time wearing Versace," King said, according to the publication. "What's up? And what all went into it is I'm wearing a lot of Spanx, I've got some fake makeup on my legs so that they look shiny, and yeah, I have extensions in my hair. So you know, I don't really look like this."

Earlier in the week, King shared before-and-after photos from her VMAs experience with fans on Instagram. She first posted an image of herself in her red-carpet look, writing "VMAS!!!!!!!!!!🌓🌹" in her caption.

As Insider's Darcy Schild previously reported, "The Act" actress paired her long-sleeved, form-fitting dress with $470 red pumps from ISCREAM. To complete her look, King wore a coral manicure, sleek, straight hair parted down the middle, two gold clips attached to each side of her head, and oversized Versace chains.

She shared a photo of the outfit on Instagram, writing: "That post VMAS glow amiright? #BackToReality #BackToMyCouch."