ATLANTA — For the mile leading up to Mercedes-Benz Stadium, which these days might be better known as Kanye West’s new home, cars crawled along MLK Jr. Drive. Thousands of fans were on the way to listen to “Donda,” his long awaited 10th album. “Kanye got that downtown traffic jammin,” one local tweeted.

As fans approached the entrance, many dressed in Yeezy attire from his past collections with Adidas and Nike, several things came into view: A fire hose of people poured into the stadium; there was so much security, you might have thought the president or the Pope was in town; vendors with coolers of beer, liquor, water and Capri Sun got comfortable outside.

Some even laid out tables of bootleg Kanye T-shirts, caps and sweatshirts with his name and face on them. A car with a large television screen parked on the street to stream the concert for fans who were not able to get inside. Mr. West’s audience runs the gamut in age, race and gender. Some wore cocktail dresses and diamonds while others wore sweats and caps. 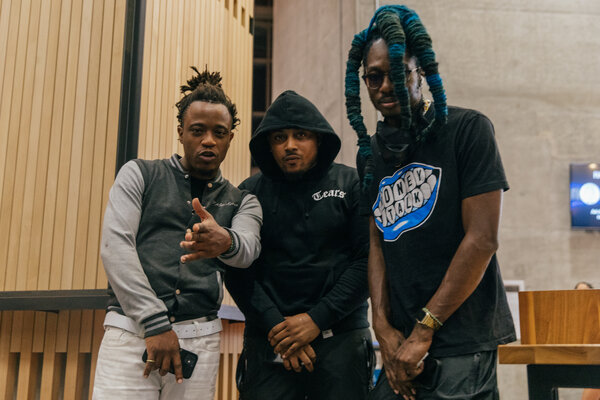 Inside the stadium, even more security details awaited. His fans and celebrity friends, including Offset, Chance the Rapper, and Kandi Burruss of “The Real Housewives of Atlanta” were present. Some played an unofficial game of “will he or won’t he?”

Will he start his performance on time? (He didn’t.)

Will he talk at the beginning or end of the concert? (He didn’t.)

Will he actually release “Donda,” the reason we have all gathered here, tonight? (He didn’t.)

“The fact that he’s still in pursuit of perfection is mind blowing,” he said, awe-struck. “Anybody else would have released the album. I’m here to see history unfold.”

When Mr. West walked onto the shockingly small, gated stage, an hour after the supposed 9 p.m. start time, applause and cheers overtook the stadium, which was filled with over 40,000 ticketed guests. Within minutes of his entry, a fan ran onto the stadium floor. Other bold attendees tried to do the same throughout the night. Most, however, just screamed their support and love for the rapper from their seats.

As if staged from a Marina Abramovic exhibit, Mr. West performed on a simple set with a bed, some weights taken from the room in the stadium where he has been living while finishing his album over the past two weeks.

He wore a black spiked Balenciaga jacket with military-style lug sole boots, and most notably, a bulletproof vest with his mother’s name — “Donda” — on it. The creative direction for the evening was part of a collaboration with Balenciaga designer Demna Gvasalia, known for staging colossal fashion shows.

Until a few days before the show, it was unknown if Mr. Gvasalia would be able to travel to the United States from Europe because of Covid restrictions, but he was granted an exemption and arrived in the nick of time. From the monochromatically dressed dancers to the grandiose lighting and transitions, the show was particularly reminiscent of Balenciaga’s biblical-apocalyptic Autumn/Winter 2020 collection.

Though the stage was sparse, other elements of the show made it feel, like Mr. West, larger than life. Five thousand dancers, some in bullet proof vests like his, encircled the rapper. A miles-high light circling the stage beamed from its center, out of the stadium and into the sky, a telegraph to the heavens. That epic beam in the sky, visible from various parts of Atlanta, represents, to Mr. West, the protection he feels from his mother, who passed away in November 2007.

Another of Mr. West’s collaborators, Mark Breitbard, global head of Gap Global, was at the show and said the whole “Donda” experience was typical Kanye. Mr. West is creating a new clothing line called Yeezy Gap with the company.

Still, since Mr. West is himself, throughout the night it was hard to escape the feeling that though he currently views himself as a son who is covered by his mother’s love and protection, he might also believe he is above it all. Throughout the 90-minute performance, the dancers walked and ran around the stage, staying close to the star, as if part of an army, tasked with protecting Mr. West.

Just when it felt like the show had ended, the light beam flashed back on and Mr. West, presumably with the assist of many hidden cables, ascended high above the stadium before being brought back down to earth.