Marking a Pandemic, One Crane at a Time

OAKLAND, Calif. — On March 5, 2020, my family attended our sixth grader’s school music performance, then went straight to dinner and a concert at Yoshi’s, a local jazz club, to celebrate my husband’s birthday. We didn’t know at the time it would be our last family outing for more than a year.

The following week, I worked my last day in the office and my then 12-year-old son, Devin, had his last day of in-person school. Anxious about the spread of Covid-19, we suspended all activities outside the home starting on March 14, a few days before the official stay-at-home order for the Bay Area.

Like everyone else, we stocked up on groceries and cleaning supplies for what we thought would be a two- or three-week lockdown. With nowhere to go and only one another for company, we came up with ways to pass the time. The three of us went on daily walks in our Oakland neighborhood and discovered new vistas and a hidden park. My husband and I binge-watched Netflix. Devin and I tried new recipes: green onion pancakes and homemade dumplings. And, inspired by a recent visit to the Japanese American National Museum in Los Angeles, I came up with the idea to fold an origami crane for every day we were in isolation. I thought that maybe we’d get to 100.

From the start, I wanted the cranes to be a joint project with my son. We’ve always encouraged Devin’s creativity: he’s loved drawing since he could hold a crayon; started playing electric guitar at 8; and got his first camera at 9. He had developed an interest in origami long before I did and he patiently taught me how to fold the cranes. Given the absence of summer camp and an inability for him to see his friends, I was happy for any activity that didn’t involve screens. We had an ample supply of origami paper already on hand, which we’d acquired over the years, and when we needed to replenish I knew I could order from Devin’s favorite stationery store in San Francisco’s Japantown neighborhood. 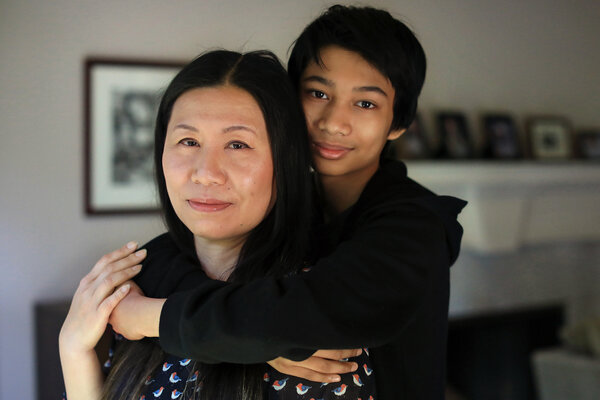 Our first milestone — 100 days of lockdown — fell on June 22. We posted photos of our 100 cranes arranged in a mandala-like shape on our dining room table. After I posted the first photo on Twitter, many people responded with exclamations: “Wow!” and “Amazing!” Several people pointed out the deeper significance of the cranes.

The Japanese legend of senbazuru says that a person who folds 1,000 origami cranes will be granted a wish. It’s often a team effort and the cranes are given as gifts to bestow good luck, long life or healing. The tradition was popularized by the story of Sadako Sasaki, a young Japanese survivor of the atomic bombing of Hiroshima who folded paper cranes while hospitalized for radiation-induced leukemia. Traditionally a symbol of longevity, the crane has also come to represent hope and a wish for peace. Of course, if we ever made it to 1,000 cranes, I knew what my wish would be: that the pandemic would end and we’d not have to fold another crane to mark even a single extra day.

At first Devin and I took turns folding a crane every day. Each crane takes a little over two minutes to fold: a tiny task if done daily. But what should have been a moment of pleasant diversion soon became a reminder of the grinding sameness of each day, so we stopped folding them daily and instead sat down for occasional marathon sessions in which we’d fold dozens of cranes all at once. Over time, I found I actually preferred the soothing, meditative ritual of making 20 or 30 in a row. 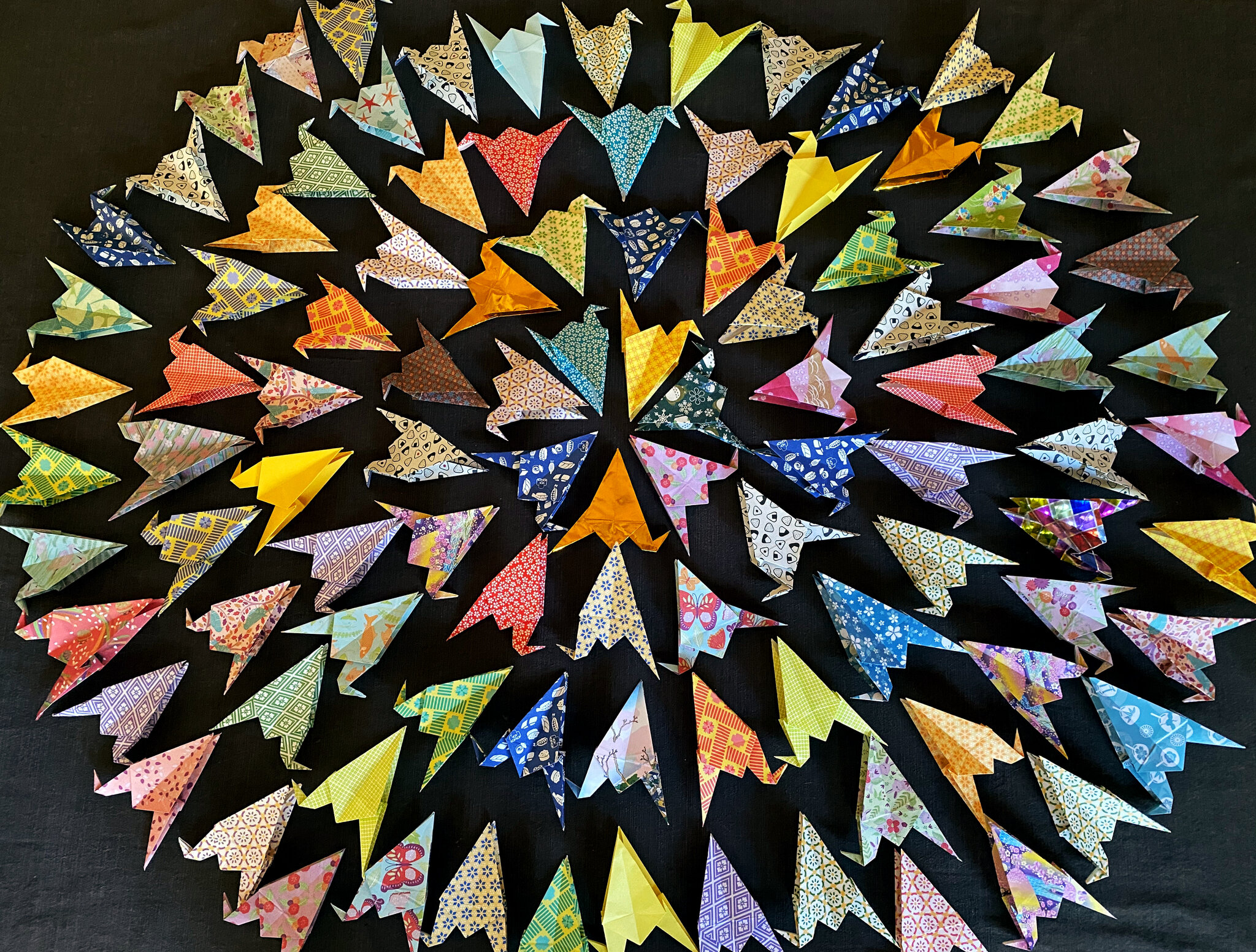 It was also a way to teach Devin about perseverance — the repetitive labor felt tedious at times but we were rewarded with beautiful photos as we completed each stage of the project. As the number of cranes grew it also gave us some perspective on the magnitude and strangeness of our ongoing experience.

We had high hopes that the pandemic would be under control by the start of the school year, but by late summer it was apparent that wasn’t going to happen. As the months wore on, it became increasingly difficult to comprehend the toll of the pandemic on our country; we felt numb to the scale of the disaster.

Data visualization experts worked hard to find new ways to show its impact; for example, when a New York Times front page on May 24, 2020, displayed 1,000 obituaries when the United States reached 100,000 Covid deaths, the solemn wall of black ink — each entry representing a soul lost to the virus — illustrated the toll in a way that numbers alone could not. For me, what broke through the numbness was a photo of dozens of iPads mounted on tripods at a hospital to allow dying Covid patients to say goodbye to their loved ones.

We posted our Day 200 photos on Sept. 30, one week after the United States surpassed 200,000 Covid deaths. Devin and I arranged the cranes in a pattern that recalled the AIDS Memorial Quilt. It helped make tangible the devastating impact of the pandemic in this country: each crane represented 1,000 lives lost.

Art that responds to tragedy has a long history — think of Picasso’s anguished “Guernica” lamenting the Spanish Civil War, or Ai Weiwei’s “Remembering,” an installation of thousands of colorful backpacks on the outside of Munich’s Haus der Kunst memorializing more than 5,000 schoolchildren who died in the 2008 earthquake in Sichuan, China. But one doesn’t have to be an artist with a capital “A” to make art in times of upheaval.

One of the most moving examples of creative expression in response to adversity is the art made by Japanese Americans who were incarcerated during World War II. Inmates made their own furniture and tools out of leftover lumber, wood crates and any scrap materials they could find, then turned to making art to help pass the time: intricate wood carvings, paintings, sculptures, quilts, jewelry and other items. “The Art of Gaman,” a book and traveling art exhibit by Delphine Hirasuna, featured more than 150 of these artworks. Gaman is a Japanese term that means to bear the unbearable with patience and dignity.

We posted our Day 300 photos a day late on Jan. 9, 2021, still stunned by the deadly Capitol insurrection a few days before and in the middle of a post-holiday Covid spike. Everyone I knew was hitting the “wall” of pandemic burnout and we feared that 2021 might be worse than 2020. The one bright spot was the beginning of the U.S. vaccine rollout. We arranged our 300 origami cranes in a rainbow gradient on the living room floor where they were soon joined by our curious cat, Amber.

The playfulness of the photos belied the somber reality. Between Day 300 and Day 365, when we provided our next update, Covid deaths had accelerated, blowing past 400,000 and then 500,000 by the end of February. March 14, 2021 — our one-year lockdown anniversary — came and went and the end of the pandemic seemed to be nowhere in sight.

Many have pointed out the American tendency to try to move on too quickly from grief. Mass shootings happen on a regular basis and we forget them by the next news cycle. We lack rituals for collective mourning and the psychic space to process unfathomable loss. It’s impossible to quantify all that Covid has taken from us, so all I can do is focus on something I can count: the passage of time.

By Day 400 on April 18, 2021, we’d hit a number of important milestones. I had received the Johnson & Johnson vaccine in early April and was the first in my family to be fully vaccinated. Devin’s school had started a hybrid schedule, and after more than a year of isolation he finally saw his seventh-grade classmates in person. In the interim he’d turned 13, his voice had deepened and he grew six inches. He’s now taller than I am.

We are fortunate to live in an area where the vaccination rate is high and where the concentration of tech jobs means many can continue to work safely and virtually. As more restrictions were lifted, we decided that the end date for our crane project would be when Alameda County reached the yellow risk-level tier (least restrictive) and when all members of the family were fully vaccinated.

Devin and I arranged all 465 cranes on the dining table, overlapping so they would fit, and took our final photos. The reaction online was warm after we posted the images; many people congratulated us on getting vaccinated and some suggested I donate the cranes to a museum as a memento of the pandemic. For now, our cranes are carefully stored in a box until I decide what we should do with them.

Of course, it’s premature to say that the pandemic is over — the Delta variant is causing caseloads to rise again and several countries around the world have had their worst outbreaks yet. The U.S. death toll has passed 600,000. The global figure exceeds four million. The virus could continue to mutate and remain with us for years to come, making it impossible to declare an official end. But what’s given me comfort is focusing on my family and what’s within our control.

After 465 days of isolation, we celebrated our freedom by having our first indoor restaurant meal in 15 months. We’ve slowly started to venture out and see our friends and we have tickets to an outdoor concert in August. Ultimately, when I look at the cranes now, boxed up, they exist to me as a symbol of hope and resilience and of what still remains. Each one represents a day we survived.

Grace Loh Prasad is a Taiwanese American writer based in the Bay Area.