Me and My Dad: Sophie and Arthur Elgort on Making Fashion Photography a Family Business

When the coronavirus pandemic began, the Elgorts — the photographer Arthur; his wife, Grethe Barrett Holby; their daughter, Sophie, with her husband and their 3-year-old daughter; and their sons, Warren and Ansel — hunkered down together in their family home of 40 years on Long Island.

To pass the time, Sophie, who is 35 and also a photographer, began asking her father, who is 81 and made his name by taking fashion photography from the studio to the street, about the stories behind some of his most famous images.

He told her about Kate Moss dancing on a table at Brasserie Lipp, Stella Tennant diving fully clothed into a pool and the Rolling Stones blowing smoke at each other while making “Tattoo You.” All of it became part of what soon turned into an Instagram TV series, “Behind the Lens With Arthur Elgort.”

Part family lore, part relationship study and part photographic history, the conversation is still going strong, even though the Elgorts are no longer quarantining under one roof. In honor of Father’s Day, Sophie and Arthur agreed to reveal what happens when a pair of photographers turn the lens on themselves.

Sophie It started early fall. Things were really, really shut down and we weren’t seeing anyone, so to have this project was something to look forward to. For a month or two we did it every Sunday, but now it’s more like every two weeks. We just got a little tripod so we could hook up the iPhone.

Arthur We hadn’t worked together before, but now we’re stuck with each other. Turned out she’s a very good interviewer. I told her she should have her own show on television.

Sophie I can get these stories out of him. My dad had a stroke about 10 years ago and had to completely relearn to talk.

Arthur It took two years. Some people enjoyed the quiet. They thought I talked too much. But I never forgot photography. 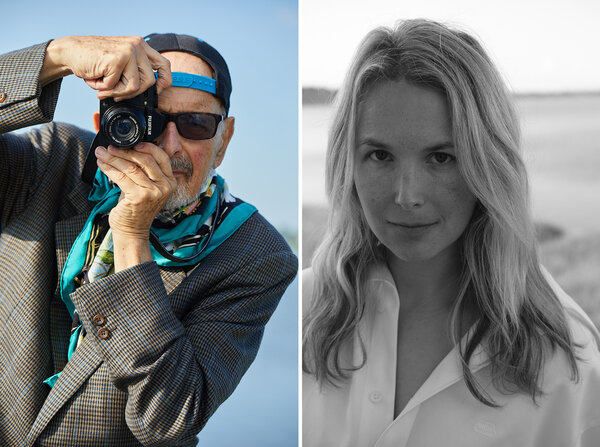 When she was in school, I thought Sophie would be a doctor, and I said, “That’s a hard job to do, they can call you in the night, you should think about photography.” I did hope one of you might.

Sophie He named my brother Ansel after Ansel Adams because he was like, “I’ve got one more, maybe he’ll become a photographer.”

Arthur Instead he’s crazy: He’s an actor. You and Warren both became something to do with a camera — he’s a director. But I gave you your first camera. I’ve given you more than one.

Sophie I learned by watching.

Arthur I always bought three of everything: for me, Sophie and Warren. You got a Rolleiflex. And then a Leica.

Sophie When we went to camp in the summers, Dad would give us little point-and-shoots with film. He always said to put the strap on. We knew how to load film. Then we’d give him the film, and he’d have it developed and make a set of doubles and say, “Give one to the person and keep one for yourself. Anything you don’t like, rip it up.” That is his favorite thing: If he takes a group shot, and there’s someone on the edge and he doesn’t think they look good, rip them off!

Arthur People get upset: “You just tore me out of the picture!” But really, I’m doing them a favor.

Sophie Once I was walking on the street with my school — we used to have to go to school chapel — and Dad was in the neighborhood and was photographing us, me and my friends, and the teachers were like: “EXCUSE ME! You cannot photograph these young girls.” I was like, “That’s my Dad.” I was never self-conscious about it. I grew up with a camera in my face all the time. At breakfast in my pajamas. He actually has a book about photographing your kids.

Arthur I have 11 books, but that one is called “How to Shoot Your Kids,” which is kind of a funny name.

Sophie One of your favorite pastimes in general is taking pictures. He always has a camera. My pastime was always dressing people up, including my brothers. I used to dress Warren in my clothes.

Sophie I used to go to his studio a lot. I liked being part of the shoots when I was a kid. I would get dropped off after school. He still has the same studio in SoHo, and there was a lot of music. He always encouraged us to play music. I grew up playing classical piano. A few years ago he encouraged me to play guitar. Now I take a lesson every week.

Arthur I learned the sax when I was about 20. I used to be an usher at Carnegie Hall. I saw Leonard Bernstein. He had just come back from Russia, and he played a Shostakovich symphony. I was in school at Hunter College because it was free. About three years ago they gave me an honorary doctorate and gave me my transcript, and I had all C’s and D’s except for art. That’s when I knew what I was going to be. I started as a painter, but I was a bad copy of Franz Kline. I couldn’t draw. But I thought, “If I had a camera, I could capture something.” So I became a photographer.

Sophie I became a photographer because shortly after I graduated from Brown, friends of mine were doing an e-commerce custom vintage company, and they needed pictures. Since I was always doing pictures for fun, they said, “We’ll give you some clothes for free if you do our pictures for our first look book.”

Arthur Then she called me up and said, “I have this job, but I know nothing about photography.” And I said, “I’ll teach you in three easy lessons.”

Sophie Then people asked me to do other jobs, and then I was just doing it. I wanted to make sure I found my own style and wasn’t copying what Dad was doing.

Arthur My first job was with Mademoiselle, which was very cool at the time. Then Alex Liberman said: “You’re too good. You’re better than my magazine Vogue.” So I said, “I’ll do Vogue instead,” and he said, “That’s a good idea.” It worked out. Now magazines are terrible. If you look at Vogue now, it’s terrible.

Arthur No, it’s bad. Everything is wrong. You used to get a lot of money. Now you get $100 instead of $500,000. There used to be contracts. I could buy this house. The studio. You don’t make money anymore in editorial. Maybe in ads. Sophie does more clients than me. I don’t get clients like you get.

Sophie I work with De Beers, and Dad’s jealous of that. He’s really hung up on it. They sent me to Botswana, and he was like, “How come I didn’t get to go?”

A ton of younger female photographers were coming up when I started. I don’t know if it directly correlated with the #MeToo movement. But I do think that made more people think this could be an industry we could get into and be supported. As far as the male gaze vs. the female gaze, I think it differs from person to person. But there is a friendship that develops with the person you are shooting. Dad always asks a million questions when he’s behind the lens.

Arthur It makes the models relax. Paulina likes her piano, so I play classical music for her. Jay-Z brings one guy with him. He’s a bodyguard, a chauffeur, everything. Beyoncé brings 50 people. Jay-Z also tells you what time you have: You have an hour, get it, then I have to go. Very nice person. Beyoncé lets you have what time you need.

Sophie Dad always made time for us. He always made us breakfast. If he wasn’t traveling, he was home by 6 p.m. for dinner. He made us bag lunches. On the weekends he would heat up baked beans and be like, “Lunch is served!”

Arthur Ansel loved baked beans. You, Warren, Ansel were not bad subjects. Every year for Mother’s Day I gave my wife pictures. I’d make a collage — there must be 35. I believe in Mother’s Day, but I don’t believe in Father’s Day. I think it’s a phony day.

Sophie But he likes fancy socks.

Arthur What I would like now is a Corvette. Nobody is going to give it to me. But I’m glad you didn’t become a doctor.