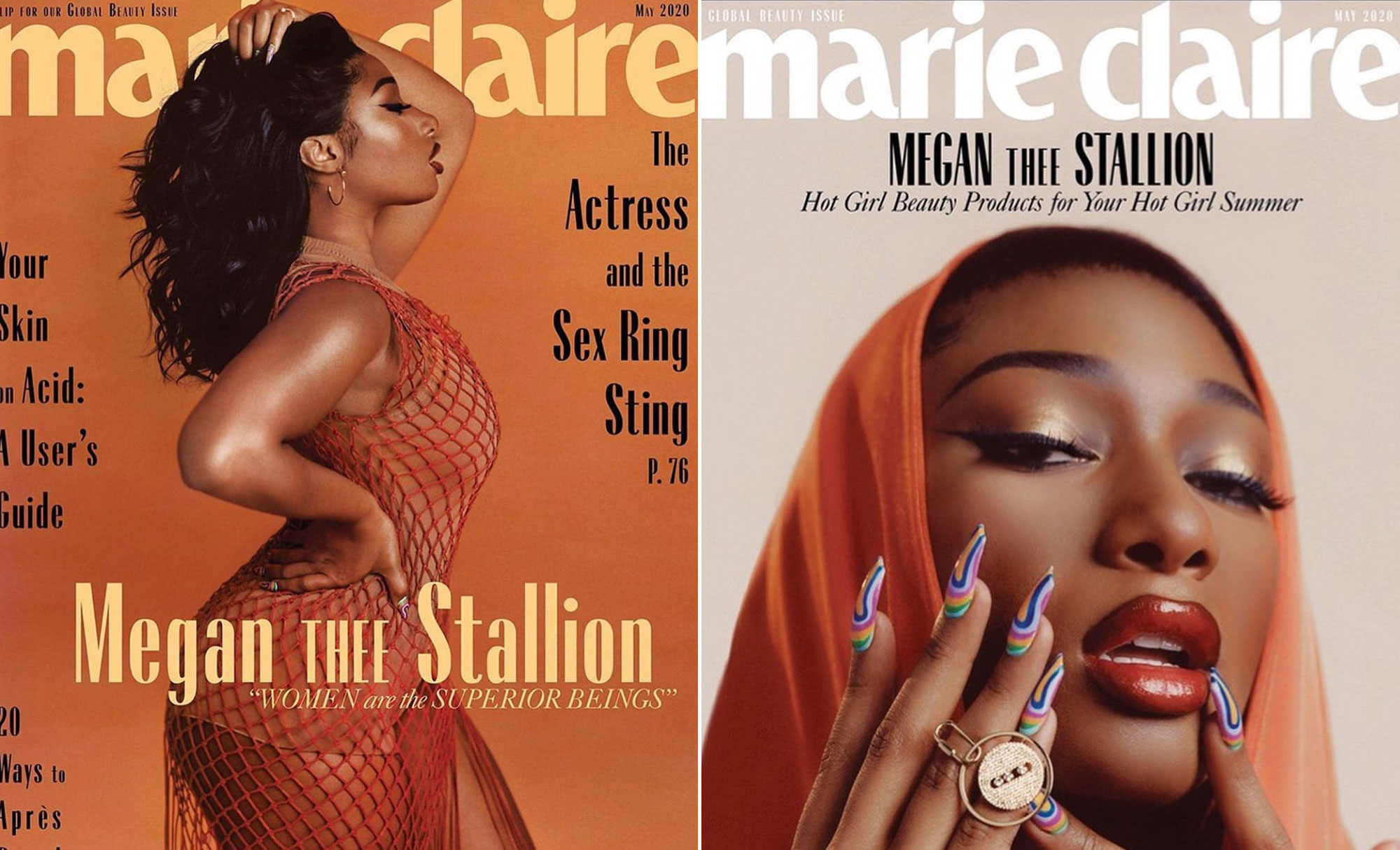 Megan Thee Stallion is the star of Marie Claire’s May issue (on stands April 16) and to say that the 25-year-old rapper slayed is a serious understatement.

For the photoshoot, the entertainer’s glam squad consisted of Sir John on makeup (Beyoncé’s also a client) Kellon Deryck on hair and Coca Michelle on nails.

All of the pics were stunning, but the covers particularly blew our minds. Take the breathtaking profile shot of the Houston-based rapper, for example. In the pic, she wears a sexy orange net dress and bodysuit by Off-White c/o Virgil Abloh, styled with minimalist Cartier jewelry.

To top off the fashionable ensemble, Stallion rocked a fierce cat-eye, a bold red lip and a rainbow nail art look. Her hair was styled in loose, romantic waves.

But by far the most glamourous shot is an up-close portrait of the “Hot Girl Summer” singer giving off what Sir John deems “70s Grace Jones vibes.” The photo is basically the definition of “chic,” giving readers a look at her flawless makeup (hello ombre lip) and colorful acrylics.

That image was certainly all about the makeup, but she wore an orange Balmain wrap swimsuit paired with a Messika Paris necklace and a statement-making gold ring.

Stallion’s cover story is just as beautiful as her beauty shots. In the article, the star got open and honest about ditching the concept of “perfection.” 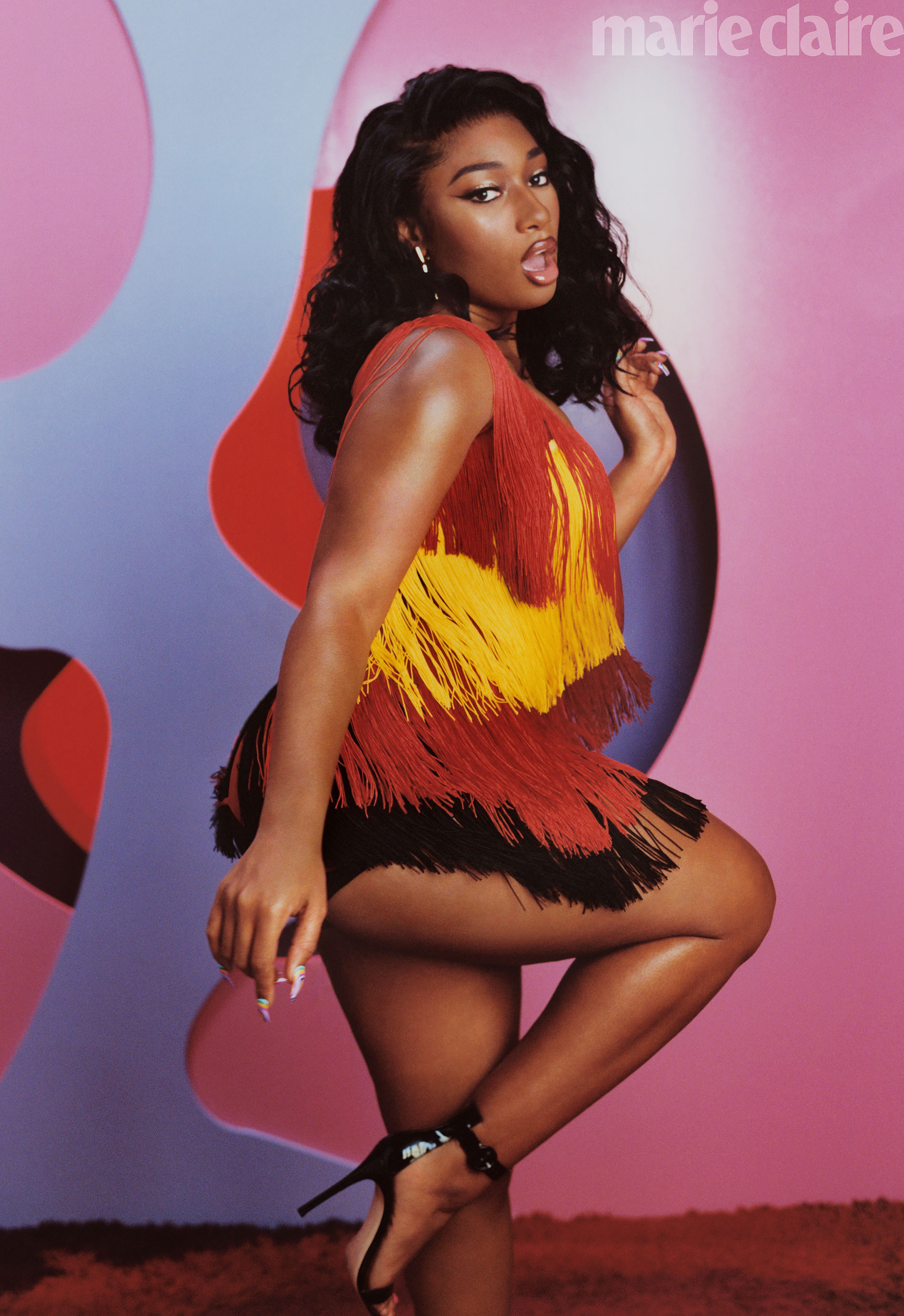 “I don’t know when it became the trend to be so motherfucking perfect, but I hate it,” she told the outlet.

What’s next for the hitmaker? Well, she released a new album titled “Suga.” Social media users have likely come across the #SavageChallenge on TikTok, a choreographed dance to her new hit “Savage” created by 19-year-old Keara Wilson.

The Houston native got in on the fun on April 6, when she finally performed the dance for her 9.9 million Instagram followers wearing Rihanna’s Savage x Fenty lingerie. It was even more epic than expected.

‘90s Fashion Legends Continue to Slay on the Runway — Heidi Klum, Naomi Campbell, Kate Moss and More Then and Now

Stallion’s also in the process of filming a new reality show called Legendary. She’ll be a judge on the HBO Max series, which is a ballroom voguing competition show — coming soon. 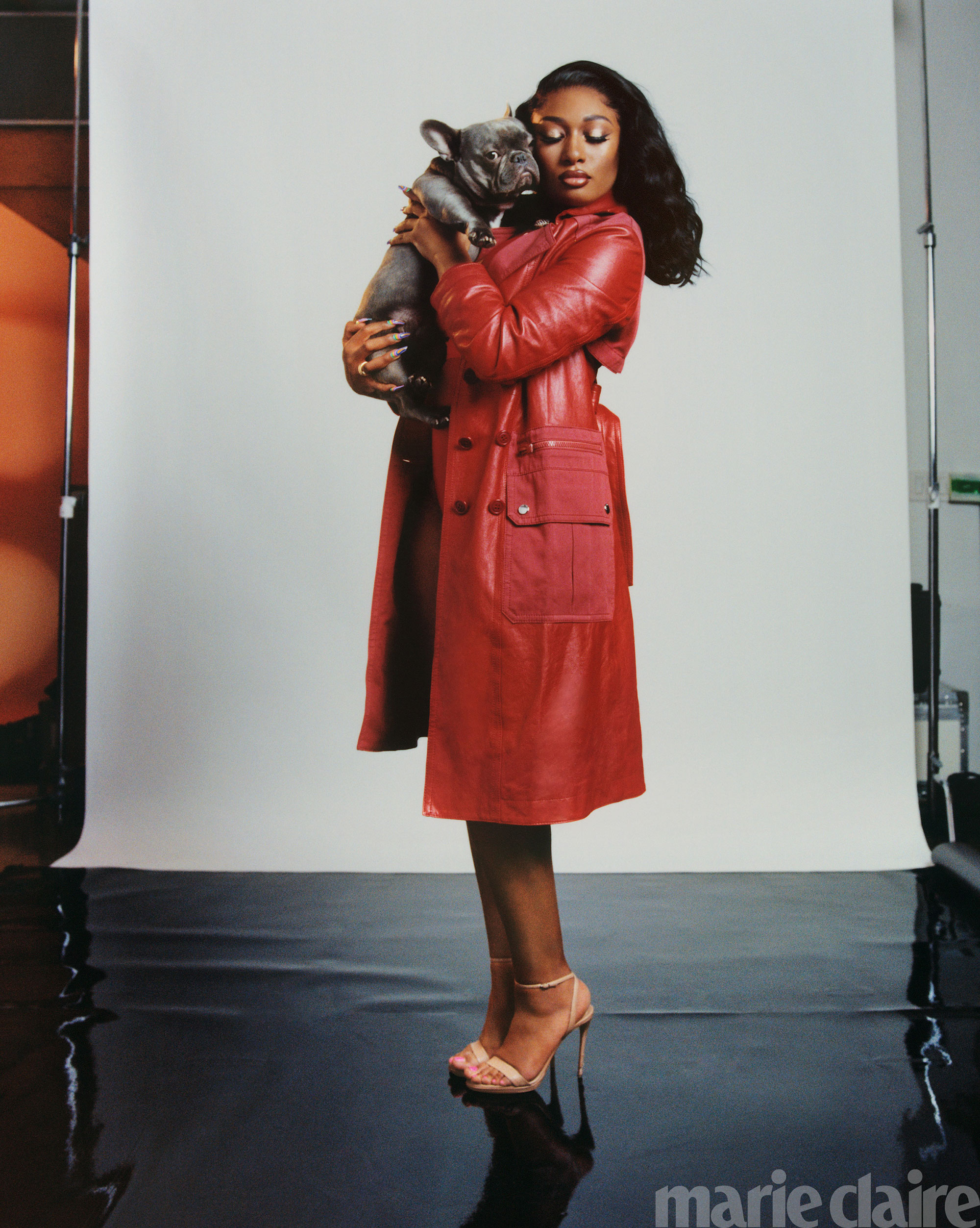 And we have a feeling it’s only the beginning for the songwriter — who’s well-aware of her power.

Listen on Spotify to Get Tressed With Us to get the details of every hair love affair in Hollywood, from the hits and misses on the red carpet to your favorite celebrities’ street style ‘dos (and don’ts!)