KEEPING your baby's clothes spotless as you change their nappy or teach them how to go to the toilet can be tricky at the best of times.

But one mum has come up with a genius way of avoiding a messy situation by simply using a babygrow clasp. 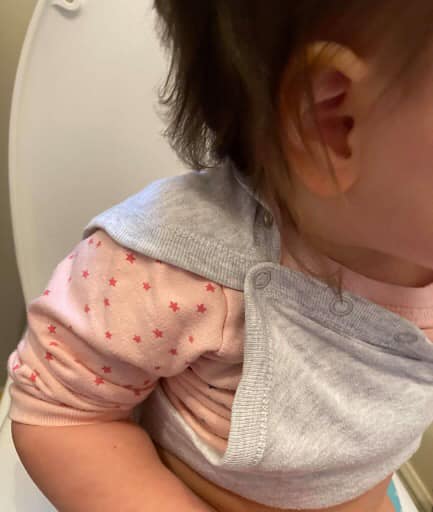 In a post on Facebook group The Parent Pack, a member called Katie Watson shared a snap she'd come across of a baby with their body suit fastened in an unusual way – but one that kept the fabric clean.

She wrote: "Why didn't I think of this?!

"Using the popper over the shoulder to stop the vest and other clothes from falling into the toilet! Genius.

"All those times squatting down with them holding their clothes up… no more."

Using the popper over the shoulder to stop the vest and other clothes from falling into the toilet! Genius

Her fellow social media users said the hack would be "perfect" in their home.

All you need to do is fasten the poppers that would normally be secured around their nappy area temporarily over their shoulder instead.

This keeps the fabric away from the toilet region while you change your little one's nappy or toilet train them.

Commenting on the post, one person wrote: "Literally wish I knew that today… Game changer, now constantly changing their nappy standing up."

Another noted: "I've done this for years when looking after children in a nursery and while being a nanny."

However, some felt that if toddlers were at the toilet training stage, then they shouldn't still be in a babygrow.

A third shared: "Why would they be in poppered vests when potty training? Does that not defeat the object?"

And a fourth commented: "If children are ready to be toilet trained then there should be no need for them wearing vests as it makes the process harder for children to independently pull down/up their own trousers/pants."

You can find The Parent Pack on Facebook here.

In other parenting news, we told you how Sue Radford gave fans a glimpse inside her chaotic home as she showed off new baby's pram.

We also revealed that a mum has issued a Cadbury's Mini Egg warning after her daughter choked to death.

And women reveal the agony of becoming a mum when you've lost your own mother.