Rethinking the In-Law Apartment as a Sunny Barn

This article is part of our latest Design special report, about homes for multiple generations and new definitions of family.

When Jade-Snow Carroll and Dulcinea Sheffer teamed with their mother, Stella DeLuca, to start an organic-bedding company last year, they called it Sister Moons. In addition to the female sibling and nighttime references, the name was inspired, Ms. Carroll said, by the moon’s intimate relationship with the Earth, how it affects tides and cycles of nature and, subtly, our bodies. The poetry of that interconnectedness struck a chord.

There is, after all, an unmistakable gravitational pull between members of this close-knit family, who seem to do just about everything together. Many of them even share a multigenerational home on a converted farm in Egremont, Mass., occupying 15 pastoral acres in the foothills of the Berkshire Mountains. Ms. Carroll, 42, and her husband, Ian Rasch, 44, a developer and builder, live with their 6-year-old daughter in the property’s farmhouse, built from 1850 to 1875 near the top of what is known as Baldwin Hill. The adjacent 1820s barn has been converted into two residences, the top one occupied by Ms. DeLuca, 63, and the one below by Mr. Rasch’s mother, Julia Rasch, 73, who is a midwife.

As for Ms. Sheffer, 40, she and her family live 25 minutes away in New Marlborough, Mass., but she is frequently found at the Baldwin Hill residence, which also serves as the Sister Moons headquarters. And when her two children, ages 7 and 3, aren’t in school, she often brings them along. Like most things in this family, child care is shared.

“It sounds a little out there, but everything happens very organically,” Ms. Sheffer said during a reporter’s visit to Baldwin Hill in late July, just days after 30 relatives had come for a family reunion. Mr. Rasch’s young-adult niece and nephew, who were spending most of the summer there, entertained the youngsters as the rest of us chatted on the main house’s front porch, with a field of head-high corn across the road and views of the Taconic Mountains opposite.

The Rasch and Carroll families have ties to the region. Growing up in the area, Mr. Rasch and Ms. Carroll even attended the same high school for a couple of years. They went away for college and to start their careers, which took both to New York City, where they reconnected, married and then moved back to the Berkshires. Ms. Sheffer studied and worked in fashion before she settled in the area with her husband, Matt Sheffer, 36, the managing director of Hudson Carbon, an organization that researches how regenerative farming practices can be used to sequester carbon. 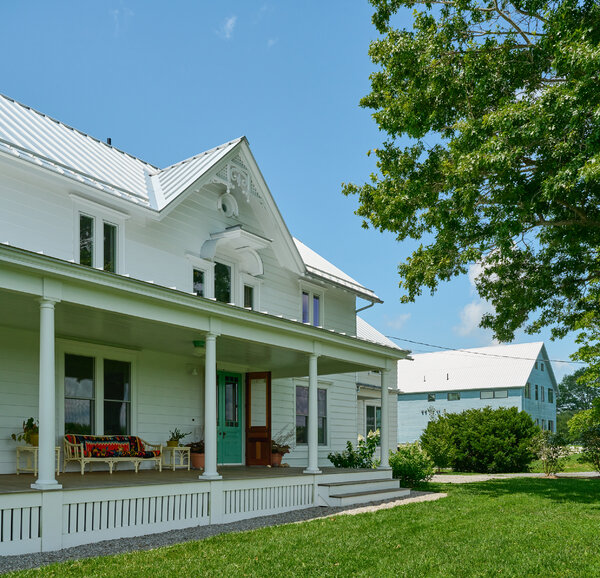 In their first several years together, Ms. Carroll and Mr. Rasch built one house and renovated another. He’s in the building business, and she, trained as a graphic designer, loves interiors and hunting for furnishings at flea markets and estate sales. (She often refinishes pieces herself.) They had long admired this well-known property — which operated as the Baldwin Hill Farm Bed & Breakfast for 22 years — just half a mile down the road from Ms. DeLuca’s home. “We actually knocked on the door once and asked the gentleman who owned it, when and if he ever wanted to sell it, if he’d consider talking to us,” Mr. Rasch said.

As it happened, when that day came, Ms. Carroll and Mr. Rasch were ready for their next project. They learned that a potential sale was in the works and they needed to act quickly. Though they’d had discussions with both of their mothers about finding a place where they could all live together, the idea hadn’t really advanced beyond some casual looking, until this opportunity arose.

“I got a phone call or an email from Ian saying, ‘We saw this amazing property, and we’re going to buy it. Are you in?’” recounted Ms. Rasch, who lived in Philadelphia but was doing volunteer health care work in India at the time. “I had like five seconds to decide, literally. And so I said, ‘Yeah, why not?’”

Ms. DeLuca, who had already decided to sell her own longtime home, didn’t hesitate. “It wasn’t like we had the time to sit down and say, ‘OK, are we all in it?’ It happened overnight,” she said. “Papers got signed and all of a sudden, we were in it.”

They closed in January 2018, paying the $850,000 asking price and essentially agreeing to take the property as is, meaning packed with old furniture, kitchenware and other objects, not to mention farm equipment accumulated over many decades — all of which took months to clear out. Also, after consulting with specialists, they determined that several badly deteriorated farm buildings, some of them extensions off the barn, were beyond saving.

For this family, choosing cohabitation wasn’t exactly a leap into the unfamiliar. Ms. DeLuca said that when her daughters and their younger brother (who lives in Brooklyn) were growing up, the doors of their home were always open, and “dinners every night were at least 10 people at the table.” Anyone needing a place to stay was welcome, including one of Ms. Carroll’s best friends, who lived with them for much of high school.

Ms. Rasch, meanwhile, raised Ian and his two sisters in nearby Copake, N.Y., at the original Camphill Village, an intentional community where residents with developmental disabilities live and work alongside families of volunteers. “It was a 600-acre farm, and I grew up with 17 people in my house — mentally disabled children and adults,” Mr. Rasch said. “My upbringing was extreme. I mean, it was 17 people sharing three bathrooms.”

He said the design challenge for this project was striking a balance between creating a sense of family community, while respecting each other’s boundaries. So after toying with a few different scenarios, including building stand-alone homes for the mothers, they opted for perhaps the most streamlined — which is not to say easiest — solution.

Ms. Carroll and Mr. Rasch returned the main house to its 19th-century scale by demolishing a large addition that extended off the back, leaving three bedrooms for their family and a guest room and a renovated multipurpose attic space that has a bed. The moms, it was agreed, would live in separate residences in the barn, which had to be extensively rebuilt and a foundation added, requiring the structure to be elevated on hydraulic lifts.

“It’s an iconic part of Baldwin Hill,” Mr. Rasch said of the barn, whose post-and-beam frame features 200-year-old chestnut timbers running the entire length. “Knocking it down, which we could have done — there’s no historical restriction — would not have been the right thing to do.”

Throughout the project, they collaborated with the firms INC Architecture & Design, which executed the schematic elevations and floor plans, and MVA, which handled the building documents. Mr. Rasch’s company, Alander Construction, carried out the renovation work, and Ms. Carroll spearheaded the interiors. They started with the main house, where they replaced the asphalt-shingle roof with a standing-seam metal one, refreshed the aluminum clapboard siding and updated the windows, without altering the house’s profile. “The entire outside is exactly as it was — we just restored it,” said Mr. Rasch.

In rebuilding the front porch, they chose to leave off the railing, but their most visible change was to remove the overgrown plantings that had choked off the porch’s views, light and breezes, installing a simple gravel border in their place. Opening that up gave the entire front of the house a breath of fresh air, of which there is a lot in these parts. That’s notwithstanding the days when the adjacent fields are sprayed with fertilizer — a reminder that this is farmland, most of it protected under the Massachusetts Agricultural Preservation Restriction Program, meaning it cannot be developed.

Indoors, Ms. Carroll and Mr. Rasch gutted most of the house, reconfiguring the former B&B’s awkward warren of bedrooms and closetlike baths, while updating the kitchen and entertaining spaces for modern family living. They kept and refinished the plank floors as well as the double front doors (with lovely stained-glass details), but the living room’s chunky stone fireplace with a hunting-lodge vibe was swapped out for a more contemporary one in blackened steel, topped by a minimalist white mantel.

The furnishings are a mostly modern mix with idiosyncratic finds from Ms. Carroll’s treasure hunts. “It’s one of my favorite things to do — it’s a sport of sorts,” she said, noting the living room’s pair of 1970s vintage rattan chairs she picked up at an estate sale and an old lyre case she converted into a side table. Artworks include paintings by Kiki Dufault and ceramic vessels by Liz Hamann, both of whom are friends.

Sister Moons’s block-printed sheets and channel-stitched coverlets in monochrome citrus hues — all made in a fair trade–certified facility in India — dress the beds in the main house and in the mothers’ residences in the barn. The barn’s lower level serves as a Sister Moons office and storage area, and as a sometime indoor rink for this family of avid roller skaters.

In spring, the barn building was finally finished, the traditional red exterior repainted a dusty blue that echoes the sky and haze on the surrounding mountains. Ms. DeLuca requested the top floor, coveting the 360-degree views.

That was just fine with Ms. Rasch, who preferred not to deal with stairs and was happy to be able to step right outside into the small orchard of apple and quince trees.

Ms. DeLuca’s must-haves included a sleep loft beneath the barn’s peaked roof, and a marble-lined bath with a double sink. “I actually found one from the Gilded Age at an estate sale,” she said. “Seventy-five dollars.”

Ms. Rasch, for her part, insisted on just one thing. “Ian asked if I wanted a bathtub or a shower,” she recounted, “and he said, ‘You can’t have both.’ I told him I needed both, and it was not negotiable.”

From the barn or the house, it is a short walk to the swimming pool across a grassy field dotted with handsome old trees, including a large linden, a Katsura, a mulberry, even a rowanberry. Wenonah Webster, a landscape designer, made a few updates, but the gardens are a work in progress, and the family decided to embrace the wildness of a few of the overgrown areas.

Farther out into the meadow that stretches behind the house, there’s an open spot where the family sometimes comes to build fires and enjoy the light as the sun sets behind Catamount Mountain. Ms. Carroll said she spent quite a few evenings there during the pandemic with friends, around the fire, drinks in hand.

“We all feel really lucky,” she said of how things have worked out. Of course, that doesn’t mean she and Mr. Rasch are finished dreaming up new projects.

Pausing in a clearing, she remarked, “This is where one day maybe we’ll build a small modern glass house for us and rent out the rest.”