Reunited (at Dior) and It Feels So Good?

PARIS — “It’s like a school reunion, no?” said Carine Roitfeld, the French fashion editor, flicking her veil of hair off her black-lined eyes and glancing around at the Dior show on Monday. The gang was back, in a specially constructed box, as always, in the gardens of the Musée Rodin, as attendees who had not seen each other in person in more than a year air-kissed and embraced in delight. Ms. Roitfeld looked bemused, and not entirely pleased.

It’s true, there’s something somewhat disconcerting about the fall headlong back into the familiar after 16 months of life suspended: the paparazzi clamoring for a shot of Jessica Chastain before the Dior show; the multicourse dinners hosted by brands every night to celebrate; the Paris traffic. The stilettos (yes, they are back.)

So while the audience is no longer jammed so tightly together that each person on a bench seems to be half on top of a neighbor’s leg, and masks are still required in tents, it’s hard not to think the gravitational pull is to the norm. Or what was the norm. Where are the signs of what has happened this past year? Where is the suggestion that fashion has processed the trauma, and the experience?

Well, “process” might be the wrong word. But some theories are beginning to bubble up through the seams. 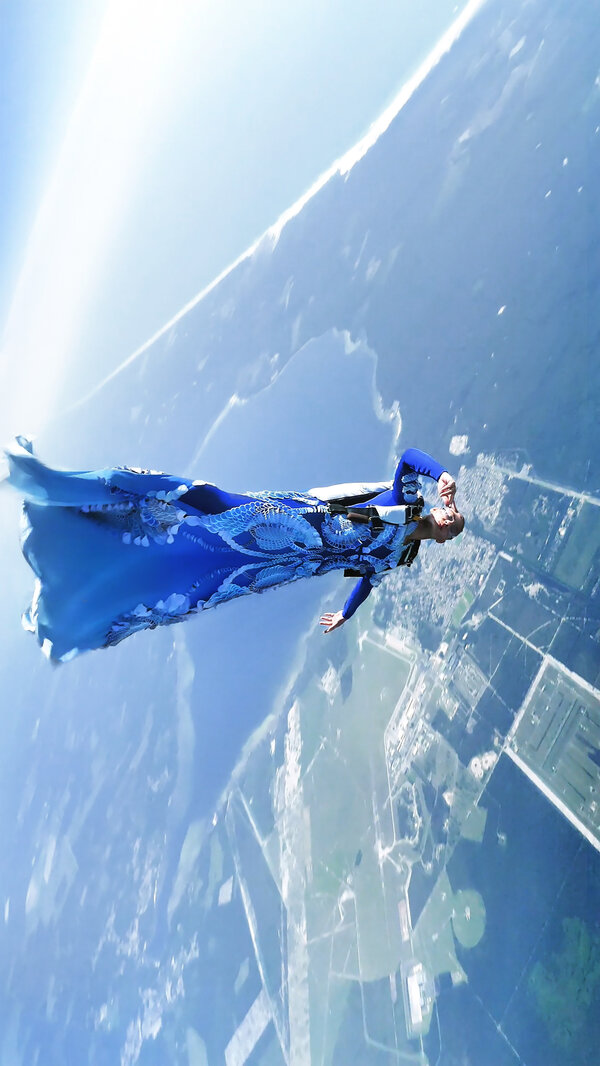 There is pandemic cause-and-effect, for example, in an Iris van Herpen video that took as its theme the earth from above; that pulled back, to offer a certain perspective so much greater and wider than the tiny islands of our individual lockdowns.

That was in part thanks to Domitille Kiger, a French world champion sky diver who swirled through the air in an extraordinary dress from Ms. van Herpen’s collection that itself seemed to exist halfway between earth and sky. Just as the designer’s work seems to exist in some realm beyond fashion, where a dress can become a mutating expression of the processes of life, some hybrid creature of technology and art and imagination and … recycling. (Actually, Ms. Kiger was falling at more than 185 miles per hour, the brand said, so think about the kind of fabric that can withstand that wind pressure.)

There is cause-and-effect in the unfettered humor and carefully calibrated excess of Daniel Roseberry at Schiaparelli, where gold body parts cast in 3-D printed resin decorated a matador denim jacket (made from 11 pairs of old jeans), double entendres were decoration unto themselves (toe shoes featured actual toes), giant roses exploded across little black dresses and an elaborately fringed black cape turned out to be made of trash bags.

And in the escapism of Giambattista Valli’s signature party dresses and gender-agnostic tuxedos, and the disco-rama of Olivier Theyskens at Azzaro, where dresses were sliced waist-high on the side and practically screamed “Tina Turner, where are you?”

“People want to live in the moment,” Mr. Valli said during a walk-through of the collection, standing next to a red ruffled skirt made from about 1,475 feet of tulle. “The past is heavy and the future is cloudy.”

But we always have nightlife! (Also, apparently, Ryan Murphy, who was name-checked in Mr. Valli’s show notes and whose TV contributions, like “Emily in Paris,” have admittedly helped with the whole escapism idea.)

That’s one way to look at it, anyway; at Dior, Maria Grazia Chiuri had exactly the opposite thought. “We wanted to work on a wardrobe” (which is fashion-speak for day wear), she said during a preview the day before her show.

So she doubled-down on tactility and the touch of the hand, rendering tweed in cashmere, feathers and intarsia, transforming coats and jackets and skirts into swaddling clothes for grown-ups, balancing them with Grecian gowns that can seem so light they are like wearing air. One of the more interesting aspects of Ms. Chiuri’s couture is the way she eschews the showiness of decoration in favor of manual artistry: to make a single cloudy dress took 12 days of invisible stitching.

She set it all against an imagined landscape rendered in almost 420 square yards of embroidery created by the French artist Eva Jospin and realized by the Chanakya School of Craft in India over three months. It was, said Ms. Chiuri, a way to honor the artisans in that country who were so hard-hit by the pandemic, and to support them.

And it was a reminder, if any were needed, that even in the Couture, the most sheltered and traditional part of the industry — a bubble of elitism catering to the few (the ones who escaped to faraway estates to ride out the pandemic) — “beauty” is not enough.

That fashion is embedded in a complicated web of supply chain and imagery that is a lot deeper than simply a mind-boggling dress. That throwing up your hands and cannonballing into the pool because we can finally gather may be ever-so-tempting (really, it is so tempting), but it cannot be all there is.

That when you go back to school, the idea is to have learned something.