MILAN — Although the exhibition surface and number of exhibitors were halved compared to pre-pandemic levels, an upbeat energy could be felt walking through the hallways of the Milano Rho fairgrounds during the two-day Milano Unica textile trade show.

In light of declining sales, shortages of financial resources and more difficult access to credit lines, textile companies are taking the opportunity to reset and press on, betting for fall 2022 on the anticipated return to dressing up. At the same time, they are adhering to sustainability principles and new business solutions that entail more cooperation, as well as investments in R&D and innovation, which are seen as fundamental to protect the country’s unique supply chain.

Touting the return to the physical format after the February digital experience, Milano Unica president Alessandro Barberis Canonico described the 270 exhibitors — up 27 percent compared to last September’s physical show — as “companies believing in a market rebound and committed to supporting the sector and the trade show.”

The fair drew 3,100 visitors, a 29 percent gain compared to September. Fabio Tamburini, chief executive officer of the Cotonificio Albini, was particularly impressed by the general upbeat mood, which he attributed to the company’s ability to stand by its clients during the pandemic.

All the Looks at the 2021 Cannes Film Festival

According to data from Confindustria Moda, the textile sector’s performance in the first quarter of 2021 remained mostly negative — with production decreasing 16.3 percent and exports dropping 21.6 percent — but there’s hope that the ripple effect of the global rebound in consumption will be felt across the supply chain, dragging textile makers out of the quagmire experienced in the past 16 months.

Last year total sales of the sector were down 29.7 percent to 5.3 billion euros compared to 2019, while exports decreased 27 percent compared to pre-pandemic levels with a negative performance both toward European and non-European countries.

Claudia D’Arpizio, a partner at Bain & Company in Milan, speaking at the trade show’s opening ceremony, said that “the market is very dynamic, with consumers getting back to buying fashion across different segments,” especially in China and the U.S., where stimulus packages by the Trump and Biden administrations are fueling consumption in the latter country.

“I’m sure this is not so tangible for textile companies,” she said, noting that ready-to-wear is proving less resilient than accessories and that formalwear will pick up at a slower pace and will need to meet the younger consumers’ preference for suits and shirts that are less formal or connected to business or ceremonies.

“Italian textile companies are the engine behind a new mind-set combining ethics and aesthetics,” explained D’Arpizio, pointing to digitization, flexibility and sustainability as fundamental assets to embrace to ensure growth.

Italian textile firms have increasingly joined forces by way of acquisitions and collaborative ventures, as was the case for the Ermenegildo Zegna Group bulking up its textile division with the acquisition of Tessitura Ubertino and — in an unexpected venture with the Prada Group — of cashmere mill Filati Biagioli Modesto.

The Albini Group unveiled at Milano Unica the fruits of its recently inked “strategic alliance” with Beste: A selvedge denim range for its Albiate 1830 brand, whose success at the fair, according to Tamburini, exceeded expectations.

Como-based silk specialist Canepa recently revealed that the Muzinich Group will acquire a majority interest in the company through its investment vehicles Capital Solution ELTIF Azimut and Muzinich & Co. SGR for an undisclosed sum, while Michele Canepa — who returned to the company in 2019, fully acquiring it and subsequently filed a restructuring plan with the Court of Como — will retain a minority interest. The acquisition is expected to mark a turning point for the troubled company, covering existing debts and setting in motion its relaunch, which Canepa has spearheaded in the past two years.

“We see the integration of different companies and M&A activities as a positive and encouraging sign,” said D’Arpizio. “They help companies evolve and get managerial structures, which are crucial to face present and future challenges,” she offered.

“Districts, too, should change and become the hotbed for digitalization and innovation, like safety nets for smaller companies to improve,” added Carlo Capasa, president of the Italian fashion chamber. “We should act as a system, in tandem with France, placing barriers against countries and districts that undermine our sustainability and social responsibility efforts.”

Speaking about his role as Confindustria’s delegate focused on promoting the excellence, beauty and taste of Italian brands in the world, OTB and Diesel founder Renzo Rosso said that “survival is guaranteed only for sophisticated tech-enabled companies, to this end SMEs that lag behind should be helped via partnerships and through associations.”

In fact, the government’s decision last month to extend the ban on layoffs and the Cassa Integrazione wage support measure until the end of October for the fashion and textile sectors was welcomed and praised by executives.

In his address at the opening ceremony, Italy’s Ministry of Economic Development Giancarlo Giorgetti said that one third of the country’s fashion companies are troubled and less likely to restart. “In the aftermath of the crisis, I expect a ‘creative destruction,’ characterized by companies that will be unable to relaunch and others that will need to be offered the best conditions to restart, paving the way for growth rather than supported with welfare,” Giorgetti offered.

To wit, Vasiliy Piacenza, brand manager director of woolen mill Piacenza Cashmere, said that the sector will see a reshuffle, with less resilient companies destined to collapse. “I’m not expecting a V-shaped rebound but definitely an acceleration that will reward survived companies with new opportunities and market shares,” he said, noting that the mill will return to pre-pandemic levels in 2023.

Looking forward to benefiting from the sharp retail rebound in China and the U.S., exhibitors agreed that exposure in those countries is crucial, although exports of textiles to those two countries declined 13.8 percent and 26.8 percent, respectively, in the three months ended March 31.

“The number of bankruptcies in Italy and the U.S. last year hurt our business,” said Giorgio Todesco, CEO of the Marzotto Wool Manufacturing company. “I believe that 2022 will be a wonderful year, but for the time being 2021 will be much like 2020, although we’re hoping to pick up in the second half,” he said noting that sales dropped 40 percent last year.

Similarly, Ercole Botto Poala, CEO of the Reda Group, is looking forward to 2022 as “this year will probably be worse than 2020,” when the company posted revenues of 70 million euros, down 30 percent versus 2019.

In Tamburini’s view the U.S. — accounting for 15 percent of the company’s revenues — are proving resilient, especially for luxury brands and premium companies with successful retail models, such as Suit Supply.

Along the same lines, Manteco, a sustainable and circular economy champion based in the outskirts of Prato, Italy, which has offered recycled wool since 1943, last month opened its New York offices, a sign of resilience of its upcyled fabrics “a product that is luxurious and beautiful, as well as sustainable and certified,” said Matteo Mantellassi, the company’s CEO. Manteco, too, managed to contain its losses in 2020, closing down 15 percent compared to 2019. 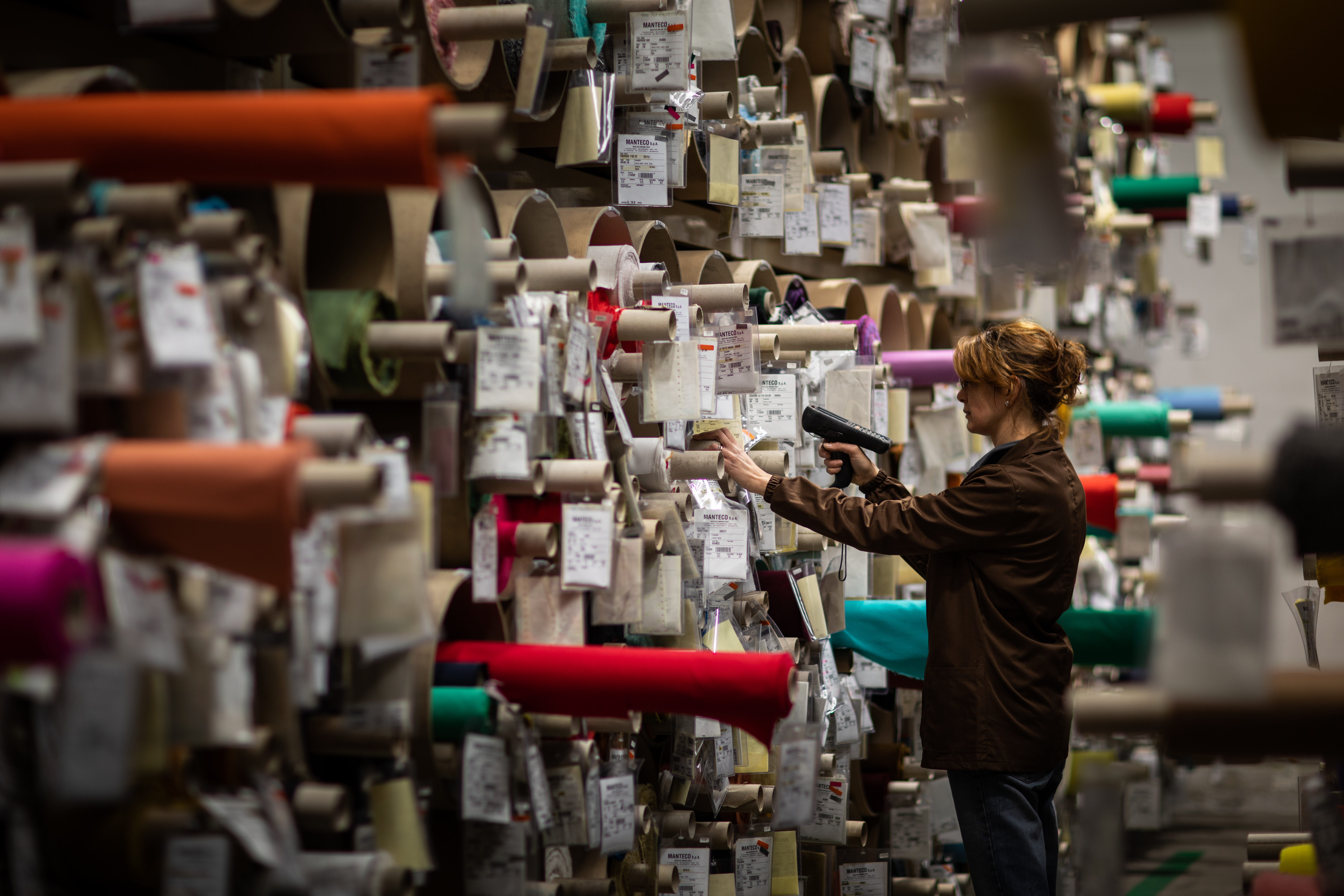 Inside the Manteco mill in the outskirts of Prato, Italy. Courtesy of Manteco

Eurojersey’s sales manager Matteo Cecchi said that “especially in the U.S. we’re seeing a sharp rebound linked to seasonless and performance-driven fabrics with fashion cred,” noting that the company, known for its Sensitive Fabrics textile, has forged new partnerships in the market including with inclusive shapewear label Skims and Anta Sports, parent of the Fila brand, in China. In 2020 Eurojersey’s sales were down 12 percent to 63 million euros, but Cecchi forecast a jump of 10 to 15 percent in 2021.

The Chinese market is also picking up fast, according to Todesco, who explained that the company is strengthening operations in the country mindful of the benefit of higher exposure in the Far East. According to Piacenza, China’s domestic expenditure is firing up, but a global rebound will occur when travel bans are lifted, and men return to donning suits. 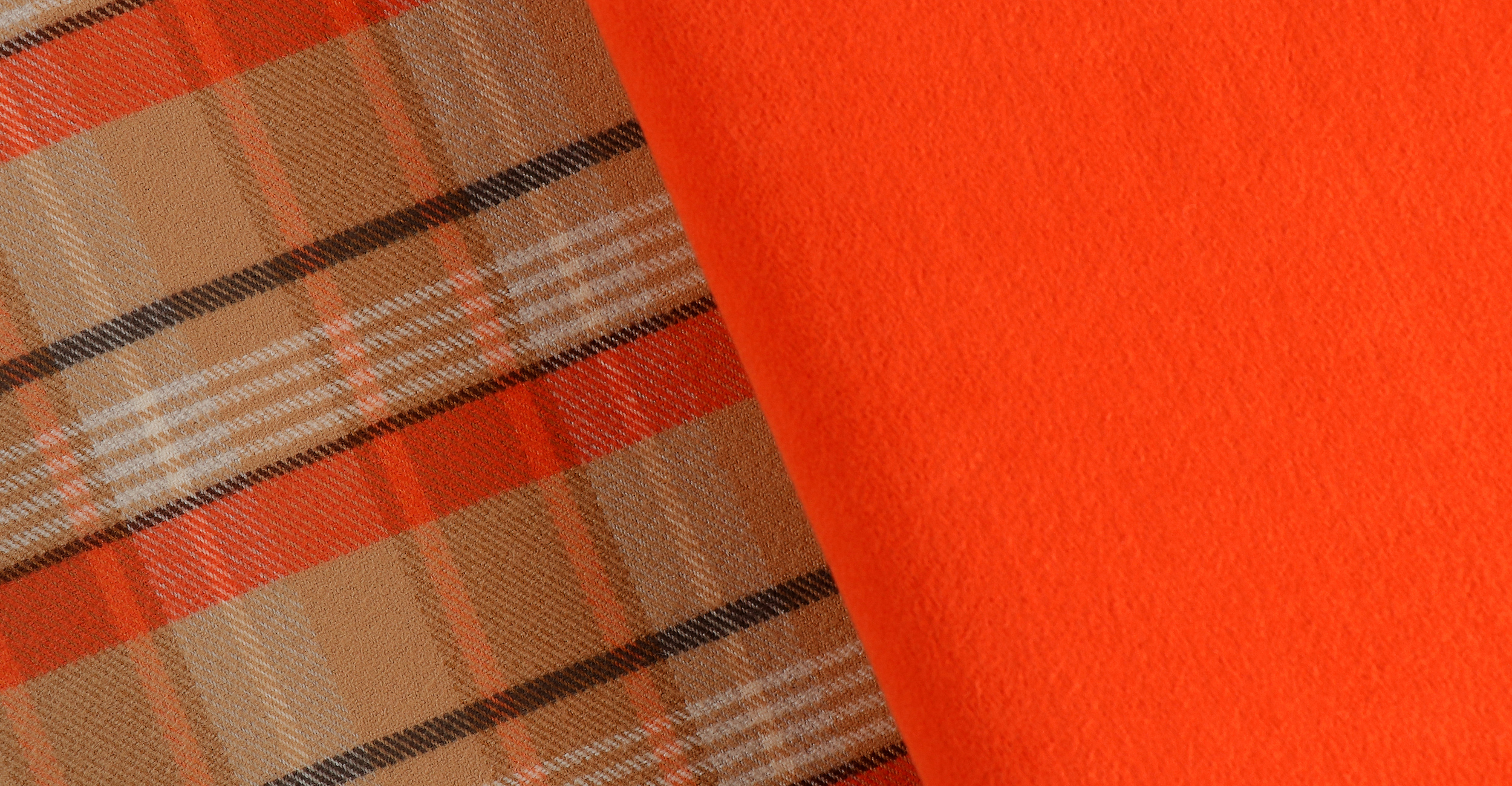 In light of better resilience in the women’s market, several companies are banking on the category, including Marzotto, which through its Opera Piemontese brand developed high-end jacquards and alpaca cashmere textiles and Albini Group, which presented its strongest women’s range to date, while Piacenza Cashmere continued to expand the category by introducing a shuttle-woven bi-stretch cashmere for athleisure bomber jackets and sweatpants, given that women’s wear accounts for 60 percent of its revenues.

Reda’s Botto Poala noted that, while formalwear stalled in light of the WFH routine, he hopes “that when the pandemic is over there will be a return to dressing up, after all ceremonies are already booming,” he said.

The fall Reda collection, the first to be presented after the company adhered to the ZQ Regenerative Index aimed at spreading principles of regenerative agriculture, included tweeds and textured wools flanked by the naturally stretch BeStretch range. 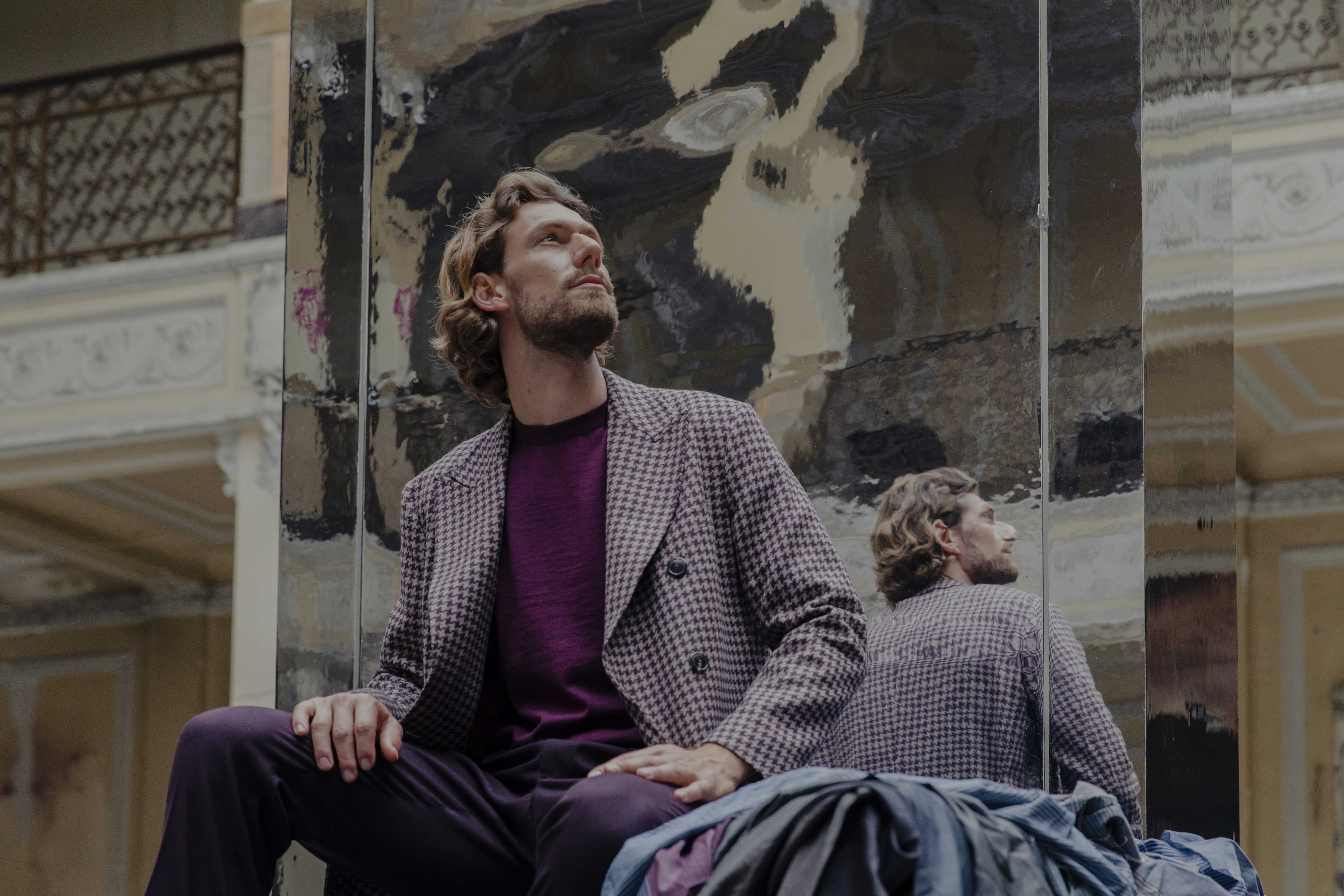 The Reda “Back2Life” collection for fall 2022. Courtesy of Reda

The downturn of the shirting category for a few years now didn’t impact the performance of the Albini Group, which managed to contain its losses in 2020, reporting sales of 100 million euros, down 27 percent compared to 2019 and with forecasts to grow 20 percent this year and hit breakeven.

Sustainability is a key focus for Italian companies, as it is for many others.

Milan-based thermal insulation company Thermore upped its high-tech research introducing the Ecodown Fibers Genius, a post-consumer PET-derived free fiber material that guarantees an even and stable layer of insulation, minimizing cold spots and clumping. It also increases its warmth by 10 percent after the first two washes.

Vitale Barberis Canonico debuted the new Offlimits woolen range at the fair, a family of blends combining wool with recycled polyester or virgin polyamide, both enhancing the fabrics’ performance, while in the same range cotton was paired with nylon perfect for outerwear.

Blends were also core to Marzotto’s fall collection, as it introduced GRS-certified blends of recycled wool and recycled polyester coming from PET, which contain 60 percent of the former, a first in the industry where poly generally accounts for the most part. The company is investing heavily in becoming carbon-free by 2022, in tandem with the Schneider group, in which it invested in 2018 to better manage its sourcing deals in Australia and New Zealand. 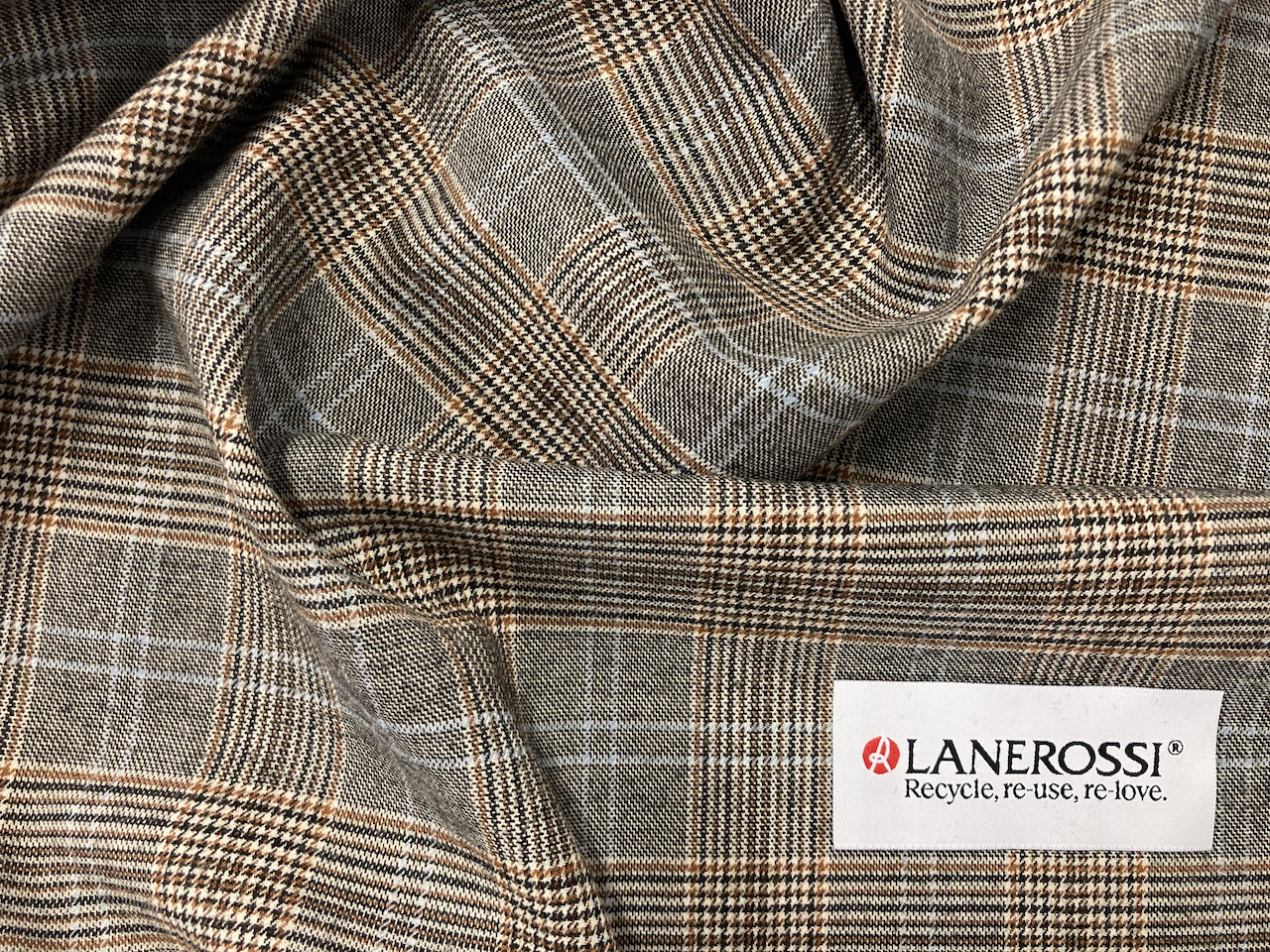 To be sure the time-to-market is crucial for textile makers in the current landscape. Tamburini explained that the Albini Group’s integrated supply chain “guarantees supplies to clients two years in advance.” Having invested in Europe- and U.S.-grown cotton, the company has also gained competitive advantage in the wake of fallout over both allegedly inappropriately labeled organic cotton from India and China’s Xinjiang cotton’s concerns over allegations of mass forced labor camps. 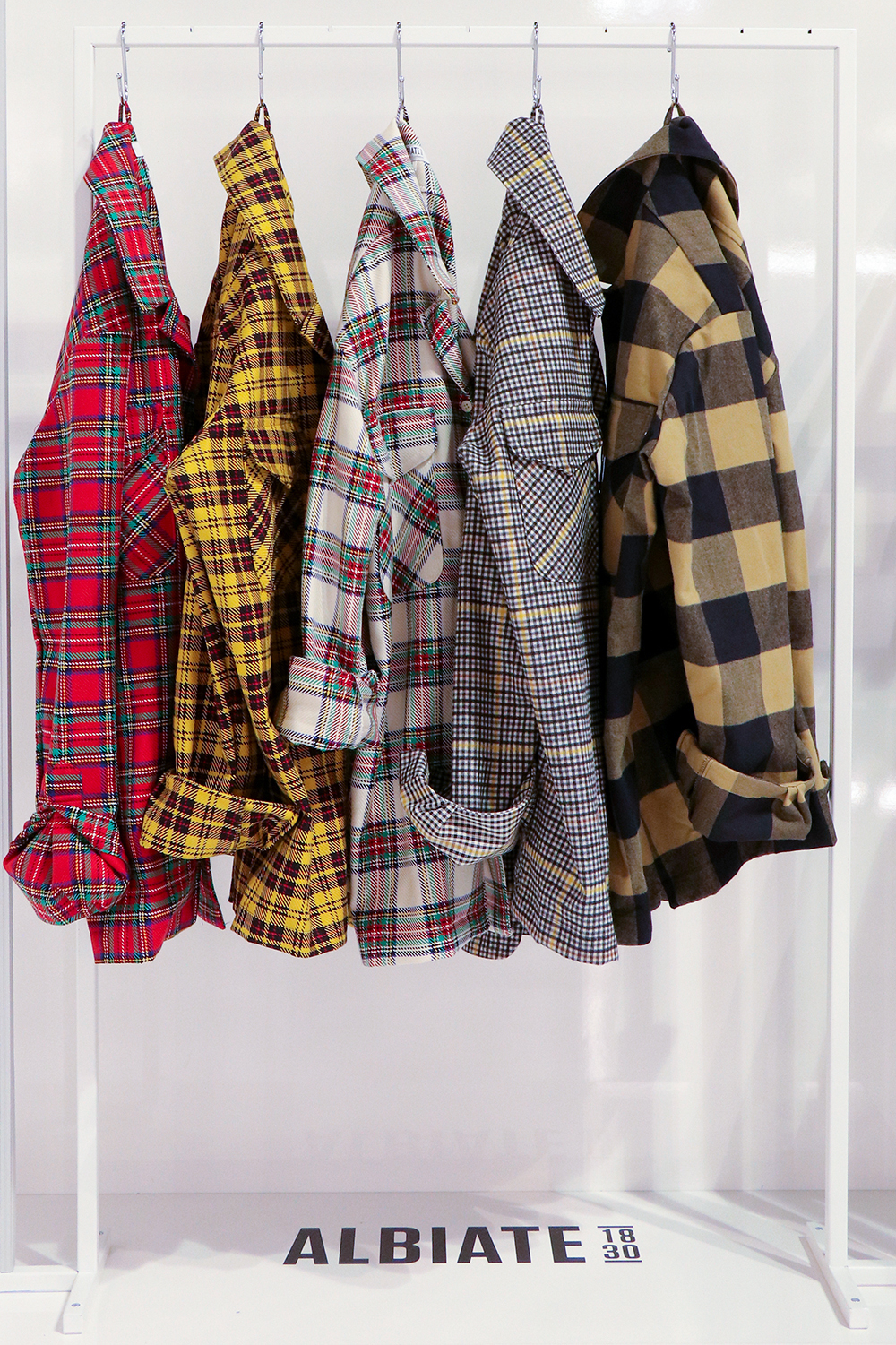 At the fair, the cotton specialist, which owns 5,000 bales of Supima cotton out of the 5,800 produced yearly, expanded its organic Biofusion range applying it on mélange flannels and stretch shirts, while working an autumnal color palette for striped shirts and tartan overshirts.

In the vein of sustainability, bio-based dyes were all the rage at the fair, with Piacenza Cashmere debuting for fall 2022 its Green Dye range of cashmere fabrics dyed with edible coloring substances, while Manteco introduced its MWool pre- and post-consumer upcycled wool range the Recype dyeing technique. The company’s artisans mix and match different fibers with their color shades to achieve each of the 1,000 nuances available, saving around 43,000 kilograms of dyes and 17 million liters of water each year. 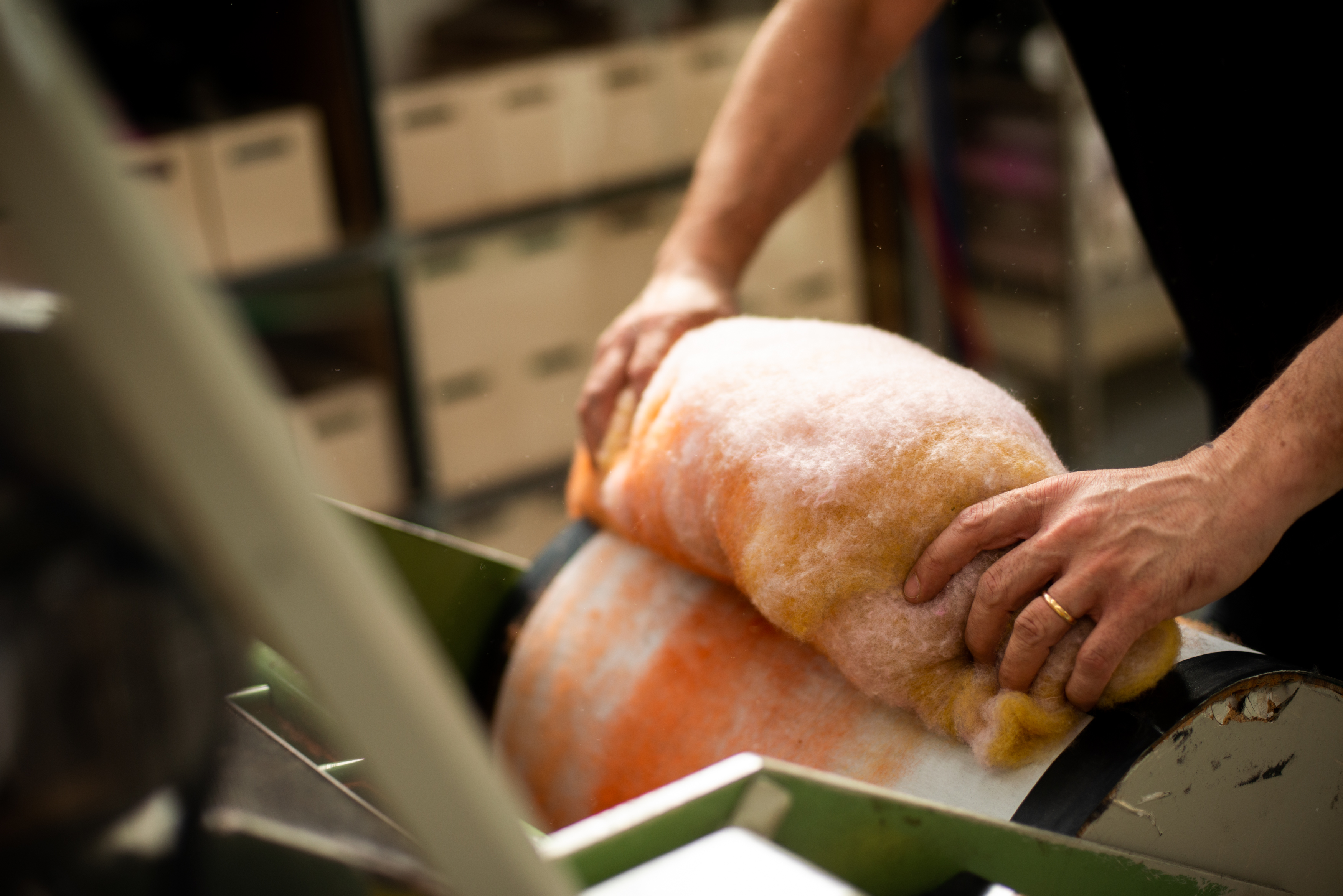 In keeping with its zero-waste mission, the mill launched the Project43 and Project53 take-back programs, collecting internal production waste and discarded textiles and knits coming from other companies or consumers, respectively. At Milano Unica it also introduced Pure, a patented recycled fabric that, unlike elsewhere, is made of 100 percent wool without combining it with other fibers.