For the second weekend in a row, one of Zach Bitter’s 100-mile world records has fallen.

Taggart VanEtten, 25, of Morton, Illinois, smashed Bitter’s 100-mile treadmill world record with a time of 11:32:05. VanEtten’s average pace was 6:55 per mile, and he beat Bitter’s record by nearly 40 minutes.

That’s quite the accomplishment for only his second 100-mile run ever.

“I am so thankful that I am able to do this,” VanEtten told Runner’s World. “Every day, I wake up before 4 a.m. and do my first of two runs a day. … I’m grateful to [have the time] to train, and I want to keep improving and go for the overall 100-mile world record.”

VanEtten, a PE teacher at Bartonville Grade School, is relatively new to the ultra scene. In college, he ran for Illinois Central College and competed in triathlons. But in November 2019, on only 23 miles of training a week, he ran the Indianapolis Marathon in 2:37:36. It was about 20 minutes off the men’s Olympic Marathon Trials qualifying times, so VanEtten pondered if he could run that mark with higher mileage and focused marathon training. But at that point, the 2020 Trials were less than four months away, so he decided to focus on making the 2024 Trials.

Last summer, he built his mileage all the way up to 200-mile weeks. However, he wasn’t able to put this fitness to the test with almost all marathons canceled because of the pandemic.

To fill that void, he chose an ambitious goal for November: a 100-miler.

“Well, I could sign up for this Tunnel Hill 100 miler, finish it, and never do another 100-miler again like many people say,” VanEtten said. “I had to beg the race director to let me in since there were a limited number of spots, and I was late signing up. 12:19:54 later, I crossed the finish line.”

That time is incredible for any 100-mile runner; in fact, it made him the fifth fastest American in history for the distance. It came after an intense 16- week training block where he ran three weeks on, one week off, running roughly 16o to 170 miles a week.

His newfound talent got him thinking about a new goal: What if he attempted the 100-mile treadmill record?

“I decided on January 2, when COVID-19 numbers were skyrocketing again,” he said, knowing that traveling to in-person races would still be risky. “I can’t get days off during the school year as a teacher, and I couldn’t fly anywhere, so why not train and promote this treadmill run?” 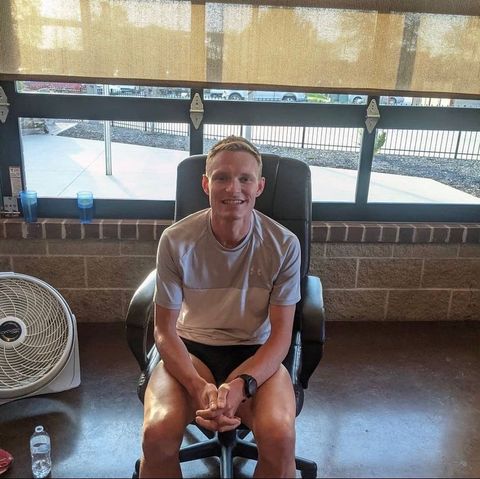 With that goal in mind, VanEtten spent every morning before school this winter and early spring on the treadmill. He completed additional runs after school and double long runs on the weekends, building up from 196-mile weeks and peaking at 258 miles for a single week.

On May 1, he set up two treadmills, which he borrowed from a local gym, and a Zwift monitor in Seasons Gastropub, a local restaurant in Morton. There was also a space for his small supporters section, to keep him motivated for 11 hours and change.

VanEtten chose to run in the Hoka Carbon X 2 shoes, with Compress Sport pro marathon socks, Run Rabbit Fly Ease 2 shorts, and a few Amazon headbands to keep sweat out of his eyes.

Every three miles, VanEtten increased the incline to 0.5 and 1.0 for a quarter-mile each to switch up the muscles being used. Being on a treadmill for so long with the same motion can lead to problems in the legs and hips.

After smooth sailing for most of the day, VanEtten considered increasing his pace around mile 75, but he said he was luckily talked out of it by his crew. He said the building was heating up later in the day, and he could’ve paid the price.

“After that, I kept a mindset of telling myself, ‘How many times have you run 25 miles at a 7-minute pace? Or 20 miles?’’ VanEtten said. “It’s gonna hurt bad, but as long as I keep up nutrition, I should be done in three hours.”

When the final miles arrived, it became clear that VanEtten would get the record. From miles 89 to 99, his mentor and fellow local P.E. teacher ran on the treadmill beside him.

The final mile was just VanEtten. As the crowd counted down to 100, VanEtten patted his purple ribbon tattoo on his back—a tribute to his dad who passed away six years prior on April 20, 2015. The anniversary was the day before his run.

“My dad, man, he was a five-minute miler in 8th grade,” VanEtten said. “When I was in high school, he came to all of my meets and he thought I was nuts then. He passed away before I started my triathlons, but I just hope I’m making him proud. I’m working a job I love, I just bought my first house a month ago, and I’m pursuing my dream in running. I hope he’s looking down proudly.”

When he finally hit 100 miles and the record, VanEtten jumped off the treadmill and embraced his mom in an emotional hug.

“She said something to me. That I needed to finish this for my dad,” VanEtten said. “It was a moment I will never forget.”

After a brief champagne celebration and mingling with his fans, he made his way home to enjoy a shower and eat an entire medium-size pizza. He was off work Monday to recover, but was back in school on May 4 to see his students and the running team he coaches.

So, what’s next for VanEtten? He’ll race at Six Days in the Dome on June 18, chasing the overall 100-mile record of 11:14:56, which was set on April 26 by Lithuanian runner Sania Sorokin. The indoor track will be the third different surface VanEtten will run on in three 100-mile attempts.

“I’m not gonna be upset if I go out fast,” VanEtten said. “I want to go out like Steve Prefontaine at suicide pace because it’ll be a good day to die. That’s what I did at Tunnel Hill, and that’s what I want to do there. After I do that, I plan to enjoy my summer.”