FLORENCE, Italy — Darwin hated peacocks. The sight of a single one of their feathers made him ill. (Admittedly, he was a hypochondriac.) Still, the man who outlined the laws of natural selection well understood the evolutionary purpose of displays that, in humans, are often dismissed as mere vanity. So, too, do the peacocks that historically flock to the European men’s wear shows and congregate at the big men’s wear fair, Pitti Uomo.

“I don’t generally indulge in sentimentality,” Raffaello Napoleone, the chief executive officer of Pitti Imagine, the fair’s parent group, said at the end of June, as he reviewed the numbers of men (and they were mostly men) returning to an event that, like many Italian businesses, had been all but done in by the pandemic. “We managed to keep about 10,000 people safe. So I think of this as a symbolic or an actual restart for the entire Italian fashion system.”

The peacocks appeared to agree.

“Pitti is this great opportunity to express again my individuality, and my vanity, but as a strong and positive message of provocation,” said Antonio Gramazio, a Florentine hair stylist with a shaved head, a tidy beard and sunglasses with lenses the size of saucers. Mr. Gramazio, 36, had stepped out for day two of the fair dressed in a double-breasted white silk blazer worn over a pleated skirt from one of the used-clothing boutiques that seem to abound in Florence. On his feet were vintage taupe suede pumps from Zara.

“Men are starting to be more comfortable underlining their feminine side,” Mr. Gramazio said, somewhat understating the case. “Above everything, my look has to be free.”

Chill relaxation, if not exactly liberation, characterized the latest edition of Pitti Uomo where, in place of the social media label fiends that tend to parade around for the street-style photographers in matchy-matchy Gucci get-ups (mules, bags, hats and pajamas) or patterned short-sets, one saw plenty of men improvising on what they already had in their closets or else dressed in stuff they’d bought secondhand or made themselves.

“I dress like this every day, every morning,” said Christian Degennaro, 31, an editor at Switch, a digital lifestyle publication.

Although unlikely to gladden the heart of a Pitti Uomo exhibitor (not a stitch he had on was store-bought, besides his Yankees cap), Mr. Degennaro’s monochromatic look — a fringed cowboy shirt, gray insurance-adjuster trousers and obligatory Nikes — captured the spirit of that most vaporous of fashion terms. It was directional. 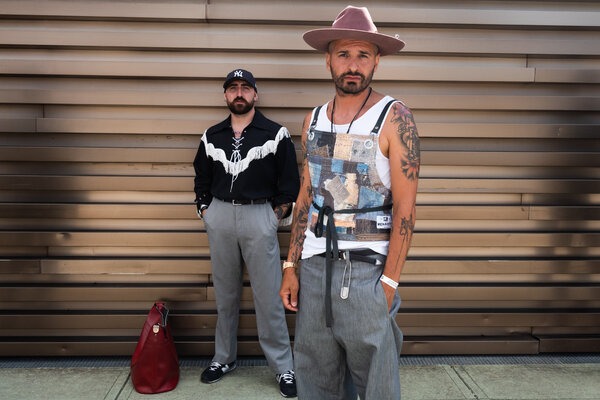 The direction had less to do with trends in apparel than a major attitudinal shift. In the Puritan West, the pursuit of beauty in dress has almost always been linked to the deadly sin of pride. Yet pride has its uses, not least as we attempt to relearn what it is to come together again in real life after far too many months spent as disembodied heads set afloat against shimmering Google backgrounds.

“I believe totally in vanity,” Mr. Degennaro said. “But, in the sense that you have to be proud of yourself and of the way you leave the house in the morning, of how you take care of yourself, how you present yourself in public.”

His friend Emanuele Tumidei chimed in. “There’s a real difference between confidence and pure ego,” said Mr. Tumidei, a designer who had created his own drop-crotch jeans with deep turned-up cuffs and a laser-printed vest/apron. (His Mounties hat and skivvy T-shirt were internet finds.)

“Vanity is a double-edged sword,” said Mr. Tumidei, who is in his 30s. “It’s important to like yourself. It’s only bad when you start to love yourself a little too much.”

Just days before Pitti Uomo began, an Hermès men’s wear fashion show had closed out the official return of Fashion Week to Paris (Giorgio Armani in Milan, which preceded it, gets credit for the kickoff) and an enthusiastic return of both an industry and a pursuit that, for all its shortcomings, remains among the most powerful drivers of contemporary culture.

Hardly an area of modern life is untouched by fashion, as anyone even glancingly familiar with TikTok, hip-hop, YouTube or the N.B.A. could tell you. While the pandemic drove the world indoors for safety, an evolutionary desire to preen ourselves proved tough to stifle.

In a makeshift backstage area of a national furniture depository on the outskirts of Paris, the Hermès designer Véronique Nichanian said as much: “We’re all quite ready to come back together.”

Whether, when we do, we are wearing Ms. Nichanian’s superrefined if largely unattainable (by mere mortals) versions of wardrobe basics — many made using now-fashionable precepts of upcycling — there seems little question that everyone of every sex or gender presentation is sick of dull pandemic plumage.

“In the middle of the pandemic, we approached Patrick Boucheron and asked him to consider what lessons this plague will teach us,” Axel Dumas, the Sorbonne-educated scion of the Hermès-Dumas dynasty, told this reporter as guests congregated for the outdoor show. Mr. Dumas was referring to a fashionable scholar of medieval history. “He said that, coming out of this, we will have to reinvent beauty,” he said.

This notion was as cheering as it was welcome. And perhaps it influenced the lens through which this particular observer came into Florence, where twice each year the males of the species congregate for an event whose enforced absence made Pitti Uomo resemble one of those rare and gorgeous, endangered natural occurrences — like the Monarch butterfly migration.

“Being too comfortable in your clothes is a kind of trap,” Cosimo Innocenti, a 20-year-old student, told this reporter at Pitti Uomo.

Being caught up in your own effect also comes with its own set of pitfalls. Yet there was something beautiful about seeing a young guy like Mr. Innocenti out in the sub-Saharan heat forfeiting comfort for style as he sauntered around the fair grounds in a chalk-stripe summer suit, hands barnacled with silver rings and a fedora cocked jauntily over his durag.

“Honestly, elegance at the end of the day is in the heart,” said Defustel Ndjoko, 45, a supremely elegant designer originally from Cameroon. “The exterior is only a small part of it.”

Mr. Ndjoko’s viewpoint was shared by Luca Lisandroni, 42, co-chief executive of the luxury-goods purveyor Brunello Cucinelli, who committed to the future of Pitti Uomo by mounting his usual lavish stand despite having shown his men’s wear collection weeks earlier in Milan.

“I don’t see it as vanity to give care to the way you look and to dressing properly,” said Mr. Lisandroni, whose impeccable attire was a far cry, he explained, from his pandemic wardrobe. “I spent 28 days alone in the apartment, so it feels like a magical moment to have a reason to dress up again. I didn’t even wear underwear, to be honest. But two years of hoodies and sweatpants is enough.”