BAFTA 2021 Film Awards: Academy pays tribute to Prince Philip who has a ‘very special place in their history’ after serving as the first ever president

Hosts Dermot O’Leary and Edith Bowman read a touching message which explained that the royal had a ‘very special place in BAFTA history’ after he served as the first president from 1959 to 1965.

Prince Philip died at the age of 99 on Friday and his grandson the Prince William, the Duke of Cambridge is the academy’s current president.

Dermot, 47, started the tribute saying: ‘Before we start tonight we want to say that on behalf of BAFTA, we are extremely saddened by the passing of his royal highness Prince Philip, Duke of Edinburgh, on Friday.

‘The Duke was BAFTA’s very first president over 60 years ago and was the first royal patron, a line that goes all the way through to BAFTA’s current president, his grandson the Duke of Cambridge.

Edith, 47, then paid her respects and continued: ‘It was Prince Philip and her Majesty the Queen’s support throughout these years that in many ways allowed BAFTA, a leading charity in the arts, to continue in difficult times and to be here today in 2021.

‘The Duke of Edinburgh occupies a very special place in BAFTA history and he will be missed. Our thoughts are with the royal family.’ 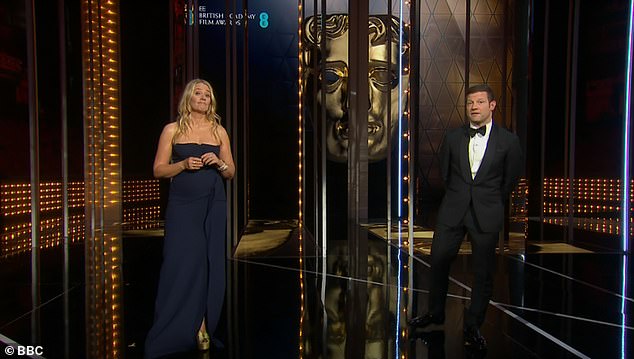 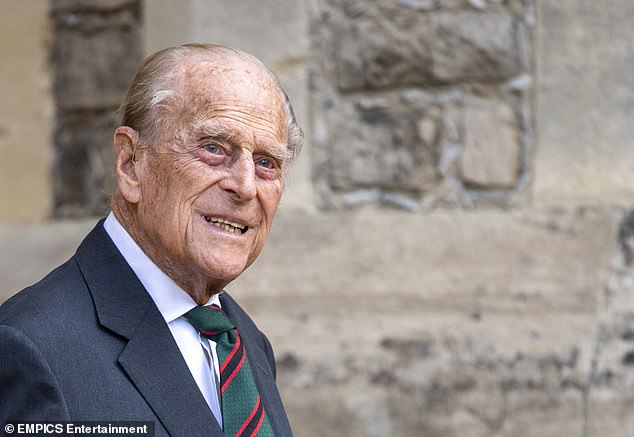 Honouring him: Prince Philip died at the age of 99 on Friday and his grandson the Prince William, the Duke of Cambridge is the academy’s current president

Clara Amfo also took a moment to pay tribute to the late Prince Philip during the first night of the BAFTAs on Saturday.

Speaking directly to the camera, Clara read out the same tribute as Sunday’s hosts and honoured the late Duke’s contribution to the academy.

Current BAFTA President Prince William was due to be making an appearance on both Saturday and Sunday, however will no longer be featuring in the event.

He was to deliver a speech via video, celebrating the resilience of the film industry over the past year. 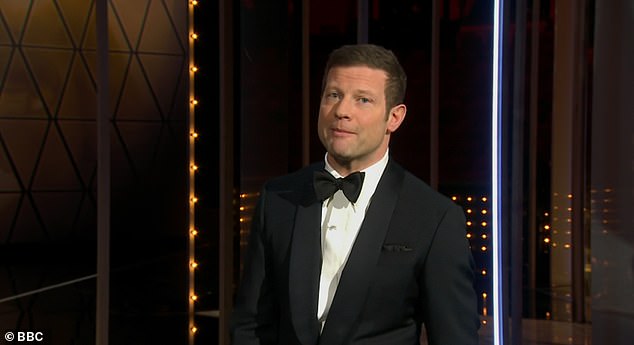 Involved: Host Dermot O’Leary read a message which explained that the royal had a ‘very special place in BAFTA history’ after he served as the first president from 1959 to 1965 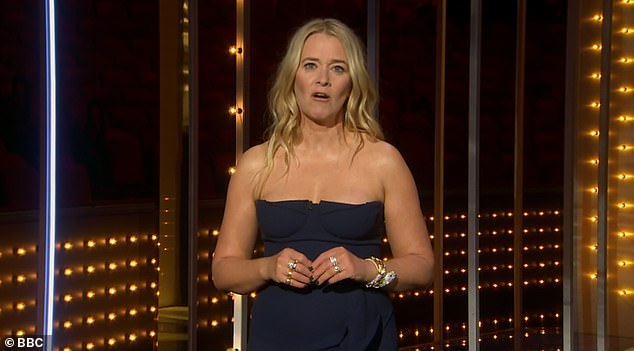 Important: Edith added that the Prince’s support  ‘throughout these years that in many ways allowed BAFTA, a leading charity in the arts, to continue in difficult times’

BAFTA said in a statement: ‘In light of the Duke of Edinburgh’s passing, the Duke of Cambridge will no longer be part of BAFTA programming this weekend.

‘Our thoughts are with the royal family, to whom we offer our deepest sympathy at this time’.

The Duke of Edinburgh was BAFTA’s first president, serving from 1959 to 1965, and continued to support the organisation throughout his life.

Prince Philip was named president in 1959, one year after the British Film Academy and the Guild of Television Producers and Directors merged to create the Society of Film and Television Arts (SFTA), a forerunner of BAFTA.

He was also present at the official opening of BAFTA’s headquarters in London, after he and the Queen gave their share of the profits from the 1969 documentary Royal Family to the SFTA. 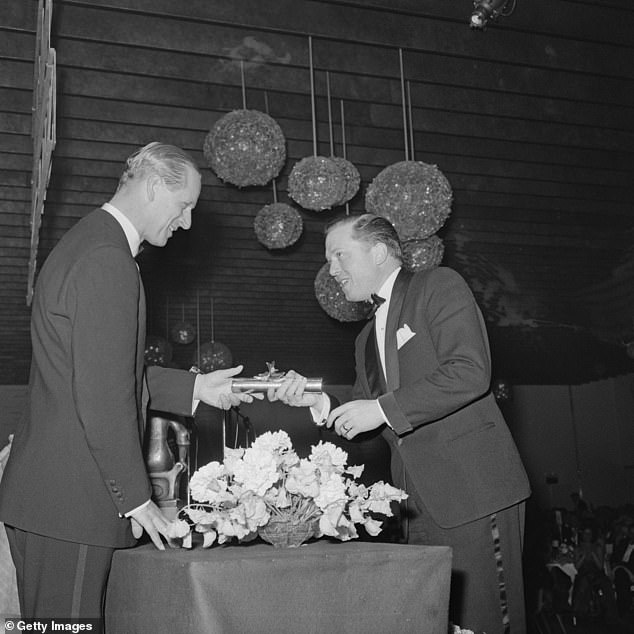 In action: Prince Philip is seen presenting an award to British actor and producer Richard Attenborough at the 16th British Academy Film Awards in London on 8th May 1963 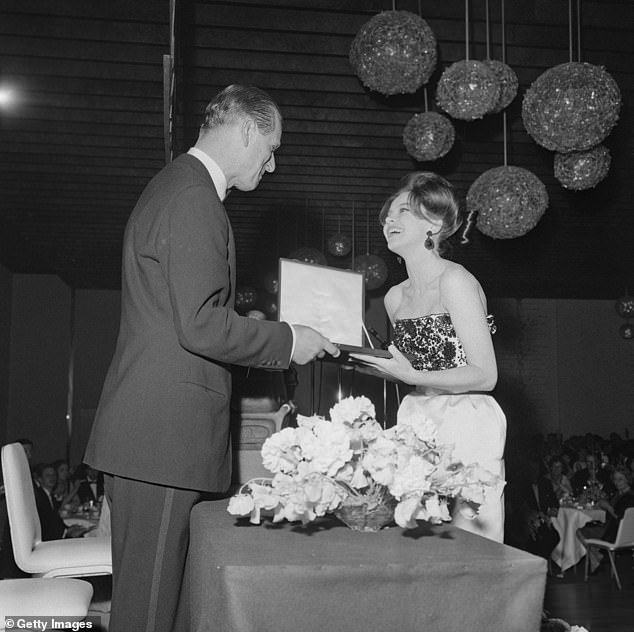 Support: Even after his tenure as president ended, Prince Philip supported the academy (he is pictured presenting the Best British Actress award to Leslie Caron at the awards in May 1963) 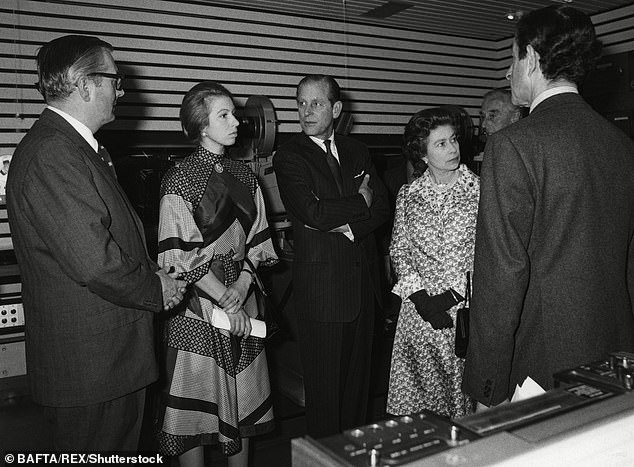 Throwback: The Duke of Edinburgh was BAFTA’s first president, serving from 1959 to 1965, and continued to support the organisation throughout his life (pictured in 1976 with Princess Anne and the Queen at the Royal Opening of the British Academy of Film and Television Arts)

The 2021 BAFTAs saw Frances McDormand win the leading actress gong for her role in Nomadland while Anthony Hopkins was named as best actor for The Father.

Other winners on the night included Daniel Kaluuya as supporting actor in Judas and the Black Messiah and Korean star Yuh-Jung Youn in the supporting actress category for film Minari.

The BAFTA and EE British Academy Film Awards 2021 is the first of the Academy’s film ceremonies to be held virtually.

The TV version of the awards show took place online during summer 2020, but last year’s film ceremony managed to go ahead a month before the Covid pandemic forced the UK into lockdown.

With the pandemic still raging, another change will take place this year: the BAFTAs will happen in two parts. 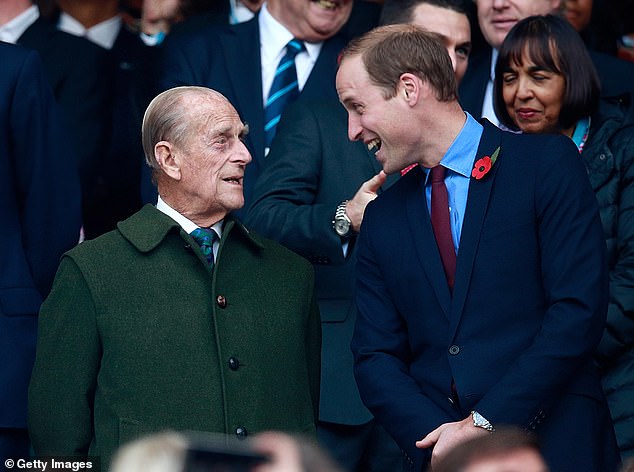 Not appearing: The Duke of Cambridge has withdrawn from the BAFTA awards coverage following the death of his grandfather the Duke of Edinburgh on Friday (together in 2015)

Both shows, recognising the very best in film of the past year, will be broadcast virtually from London’s Royal Albert Hall. The first show celebrates the craft of film while the second main show will feature the mainstream awards.

BAFTA has announced their most diverse list of nominees in the awards’ 74-year history.

In a first for BAFTA, four women have been nominated in the Director category. Three of the nominated directors are also nominated for Film Not in the English Language.

As part of BAFTA’s pledge to support fresh talent, four of the five nominated films in Outstanding Debut are also nominated across other categories, with first-time nominees accounting for four of the six nominated Directors and 21 of the 24 nominees in the performance categories.

British talent is rife in 2021, with the Outstanding British Film category increasing from six to 10 nominations, three of which are also nominated for Best Film. 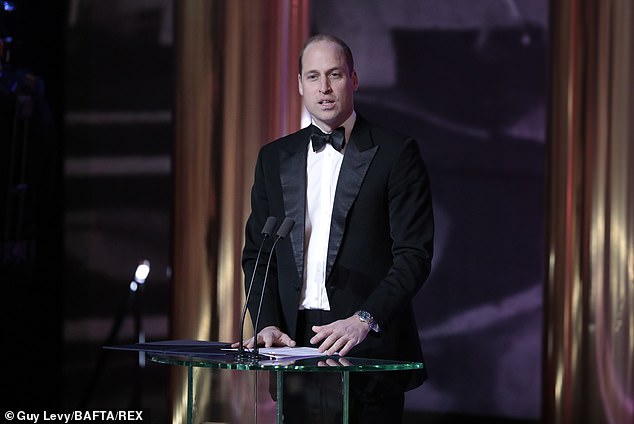 Past appearance: The Duke of Cambridge (pictured at the BAFTA’s in 2020) was to deliver a speech via video, celebrating the resilience of the film industry over the past year

VANESSA KIRBY Pieces of a Woman

MADS MIKKELSEN Another Round

THE TRIAL OF THE CHICAGO 7 Stuart Besser, Marc Platt

OUTSTANDING DEBUT BY A BRITISH WRITER, DIRECTOR OR PRODUCER

FILM NOT IN THE ENGLISH LANGUAGE

ANOTHER ROUND Thomas Vinterberg

THE TRIAL OF THE CHICAGO 7 Alan Baumgarten

THE OWL AND THE PUSSYCAT Mole Hill, Laura Duncalf – WINNER

ANOTHER ROUND Tobias Lindholm, Thomas Vinterberg

THE TRIAL OF THE CHICAGO 7 Aaron Sorkin

NEWS OF THE WORLD Dariusz Wolski

THE ONE AND ONLY IVAN Santiago Colomo Martinez, Nick Davis, Greg Fisher