Following Daunte Wright’s death in which a police officer fatally shot him during a traffic stop, outraged celebs like Kim Kardashian and Halsey are demanding justice.

“Our hearts are heavy over yet another shooting of a Black man,” former President Barack Obama tweeted, after 20-year-old Daunte Wright from the Minneapolis suburb of Brooklyn Center was shot and killed at the hands of police on April 11. The incident occurred just 10 miles from where George Floyd was killed by another Minneapolis officer on May 25, 2020. “It’s important to conduct a full and transparent investigation, but this is also a reminder of just how badly we need to reimagine policing and public safety in this country.”

Kim Kardashian, along with her sisters Kourtney, Kendall, and Kylie, all shared messages in support of Daunte, whose killing sparked further outrage in a community where tensions are already high surrounding the trial of Derek Chauvin. The KUWTK stars took to their Instagram included links with information for legal help, how to take precautions and safety measures if you plan to protest, and how to support and donate. Halsey also posted the helpful information to her Instagram stories in show of support.

Demi Lovato also called for change as she took to Instagram and captioned a post from the American Civil Liberties Union (ACLU) with the hashtag, “#BLACKLIVESMATTER”. She shared their important message which read: “Daunte Wright should still be alive today. It’s clear that the only way to end police violence is to immediately divest from the police.” 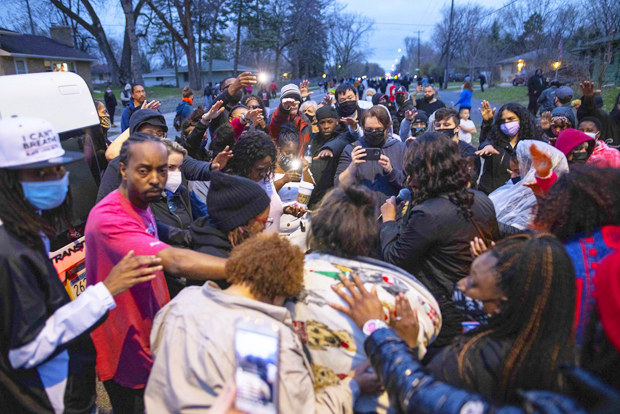 Daunte was pulled over for a traffic stop on April 11 by Kim Potter, a 26-year veteran of the department, and two other unnamed officers. She was acting as a field training officer and was training a new officer at the time. Brooklyn Center Police Chief Tim Gannon held a press conference the following day and released bodycam footage of the incident. He said when officers asked Daunte for his ID, they found out he had an outstanding misdemeanor warrant and attempted to take him into custody.

The bodycam footage shows Daunte releasing from the officer’s grip as they began to handcuff him. He broke free and a struggle ensued, and as Daunte jumped back into his car Potter threatened to tase him. She pulled out her gun and shouted, “I’ll Tase you!” She then yelled, “Taser! Taser! Taser!” before shooting him and saying, “Holy s**t, I just shot him.”

Daunte drove away in his car and traveled several blocks before hitting another vehicle. He was pronounced dead at the scene. Tim Gannon called the shooting an “accidental discharge” and said “It is my belief that the officer had the intention to employ their taser, but instead shot Mr. Wright with a single bullet.” Brooklyn Center Mayor Mike Elliott announced on April 13 that Tim Gannon and Kim Potter have both resigned.

Chelsea Handler responded to claims that Kim Potter’s shooting was “accidental”. Shortly after the press conference, she tweeted: “Stop normalizing the word ‘accident’ to describe Black people being killed by police.” The following day she added, “Why would any person of color ever comply with a police officer when there is a 50/50 shot of getting accidentally’ shot?”

Madonna added, “This video of Daunte Wright’s shooting is deeply upsetting but equally so is Police Officer Tim Gannon’s explanation of how it was all an accident. She had a taser in one hand and a hand gun in the other. She warned everyone she was going to taser a handcuffed. Daunte who was pulled over for a traffic violation and instead she shot and killed him! No way to fix this accident is there Tim??!! This is so infuriating and unacceptable. God Bless Daunte and his family. #justicefordauntewright #guncontrol