The former president joked about not being taken seriously in the Obama household in a new interview.

Barack Obama might have been the former president of the United States, but in the Obama family household, he is simply the “brunt of every joke.” The politician, 59, appeared on the July 1 episode of Dax Shephard and Monica Padman‘s Armchair Expert podcast and chatted about the dynamics between his daughters, Malia, 22, and Sasha, 20, and wife Michelle Obama. According to Barack, his children take Michelle, 57, much more seriously.

“They know that I’m all bark and no real bite. Michelle, she’s the top dog ’cause they’re scared of her,” Barack said, adding, “Michelle says that you have to always have at least one parent who the kids think is a little bit crazy and might actually kill you.” When Dax later asked if he had “more sway” with his daughters given his time in the office of the highest power, Barack said, “Absolutely not!”

“You’re never a prophet in your own land,” the former president said. “In fact, I am generally the brunt of every joke in the household.” Barack continued, “At the dinner table, the three of them just mock me constantly about my big ears or my weird habits or fashion sense or if I mispronounce the name of some hip-hop star that Sasha’s been listening to.” 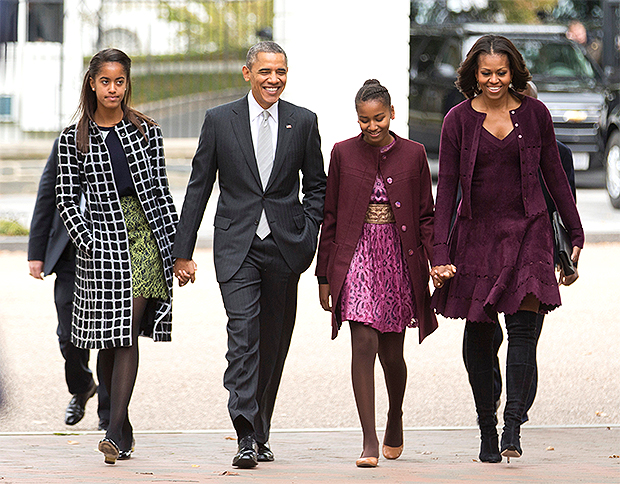 “They all go, ‘What an idiot.’ So that’s basically the vibe at my house,” he continued. All jokes aside, the A Promised Land author is proud of his daughters. In an interview with CNN‘s Anderson Cooper in June, Barack gushed about how Malia and Sasha are “so much wiser” and “more sophisticated” than he was at their age. He also opened up about their involvement in the Black Lives Matter protests and fight against police brutality, revealing that he does “worry about their physical safety.”

“I always worry about their physical safety; that’s just the nature of fatherhood,” he told Anderson. “But in terms of them having a good sense of what’s right and wrong, and their part and role to play in making the country better — I don’t worry about that.” Barack added, “What I find interesting is they’re also starting to be very strategic about how to engage the system and change it. They’re not just interested in making noise, they’re interested in what works.”