It has been confirmed today that David Beckham’s dad has got engaged to solicitor Hilary Meredith. The happy couple released a joint statement while self-isolating at their home in Cheshire.

We are thrilled to say that we are happily engaged

It read: “While there are far more important things going on in the world right now, we are thrilled to say that we are happily engaged.

Ted and Hilary are believed to have met last year thanks to their charity work for army veterans at Broughton House Veteran Care Village.

The 71-year-old was married to David’s mother Sandra Beckham for 32 years before they divorced in 2002. 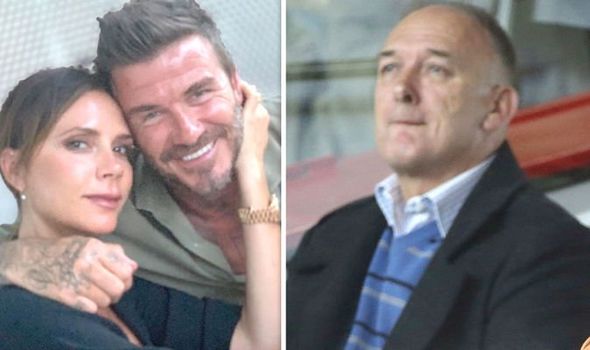 They married back in 1969 and went on to have three children; Lynne, David and Joanne.

Ted previously opened up about the breakdown of their marrige in autobiography, David Beckham: My Son.

He wrote: “All the hype, all the stress, all the attention – it wasn’t a world we were used to and it was very tough.

“I don’t think we were really prepared for it – although I’m not sure there’s much you can do to prepare yourself.”

He added: “You just get swept along in it and bowled along. But it does wear you down.”

His parents’ split is thought to have been around the same time as last few months at Manchester United.

Ted added in his book: “David has spoken about how hard our splitting up was for him – it was tough for all our children.

“I know they were all pretty much grown up by the time we got divorced but it was still a heck of a shock for them.”

He went on: “The last thing I wanted was for them to take sides. The problems lay between Sandra and me, not with any of them.

“We’d been married for 33 years and had simply drifted apart. Just about the only thing we had in common was football.”

She is known for her work on behalf of the UK armed forces, as well as veterans and their families.

David and Victoria are yet to comment publicly on the news, but have been keeping fans updated on their isolation plans via Instagram.

Last night the father-of-four sent a message to pal Sir Elton John in view of his 61.9 million followers.

He wrote: “Happy birthday @EltonJohn. We miss you all “DavidFurnish.”

His words were accompanied by a snap of him and the crooner on yacht while holidaying last year.