David Beckham showed off his tattoo-filled body as he went shirtless to teach some tricks to his family’s English cocker spaniel, Fig, in a steamy new video

David Beckham, 46, is the hottest dog owner around! The soccer star took off his shirt (much to the pleasure of his fans) to train Fig, his family’s English cocker spaniel, in a sweet Instagram video shared on Monday, June 14. David’s array of tattoos across his body were also clearly visible in the footage.

In the video, David kneeled on the kitchen floor wearing nothing but white sweatpants as he taught Fig how to perform a high five. To pull off the task, David asked Fig to give him his paw, to which the canine eventually obliged and earned a treat for his obedient behavior. “All we do in lockdown is high five and eat #figLovesHighFives 🐶,” the athlete wrote in his caption.

David is no stranger to ditching some clothing when spending time with his dogs. In fact, on June 2, David shared an Instagram video that featured the star posing shirtless with a walking stick while out on a stroll with his canines and wife Victoria Beckham.

Alongside the steamy photo, in which Victoria, 47, was not visible, David wrote, “Yep this is England 🇬🇧 It’s what we do ,☀️ comes out we take our shirts off 😆 even walking the dogs when @victoriabeckham is laughing at me 🤨.” 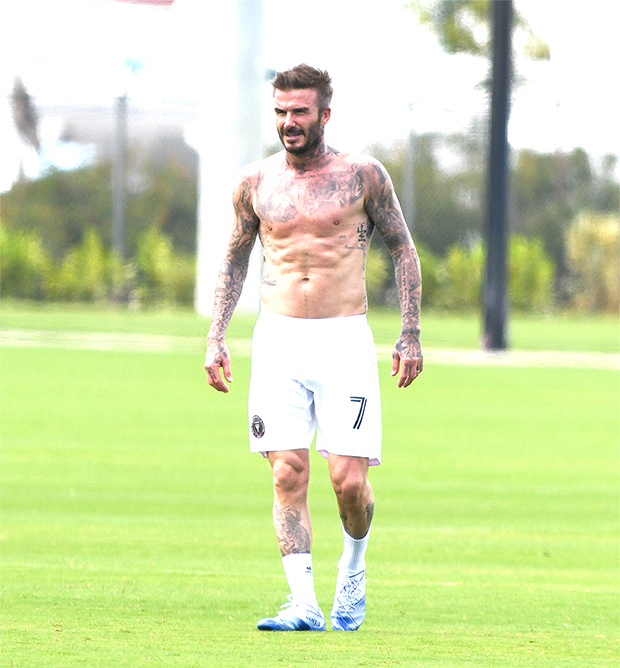 David and Victoria’s family is a tight one. The athlete and fashion designer are parents to sons Brooklyn, 22, Romeo, 18, and Cruz, 16, and daughter Harper, 9. The family will also add a new member once Brooklyn ties the knot with fiancée Nicola Petz. The couple got engaged last summer.

Victoria spoke to British talk show Lorraine about her love for Nicola, 26, last year. “We couldn’t have asked for Brooklyn to meet a more adorable, lovely lady,” she said. “It’s nice that with everything that has gone on this year that Brooklyn has found his soulmate and the lady he wants to spend the rest of his life with.”