The Duchess of Sussex was seen wiping away tears on Monday 19 September at the funeral of Queen Elizabeth II, Meghan’s husband Prince Harry’s grandmother.

At several moments throughout the emotional service Meghan was seen composing herself and later she was pictured with Sophie, Countess of Wessex, with the two appearing to share a tissue.

The mother-of-two had met the Queen several times, and they took part in several engagements together when Meghan was a working royal.

Meghan and Harry named their youngest daughter Lilibet in tribute to the Queen, who met her namesake in June for the first and only time when they were in London to celebrate Her Majesty’s Platinum Jubilee.

MORE: Meghan Markle and Princess Beatrice twin at Queen’s funeral – did you notice?

On arrival at Westminster Abbey, Meghan was seen giving her niece Princess Charlotte a comforting smile as the seven-year-old looked around at her aunt.

The Princess arrived at the event with her older brother, Prince George, and her mother Princess of Wales and grandmother, Camilla, the Queen Consort. 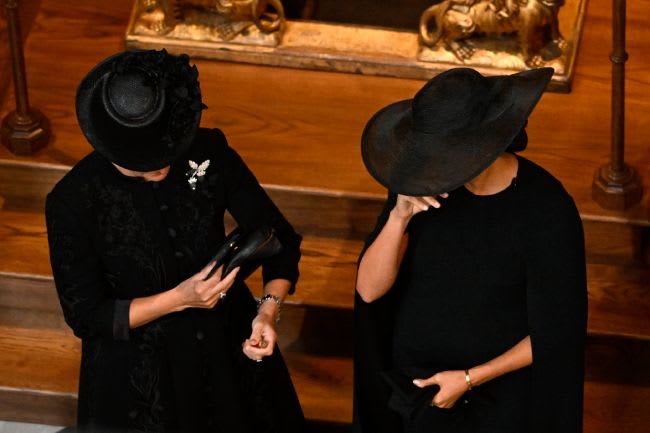 Meghan was seen with Sophie during the ceremony

Meghan arrived with Sophie and later sat next to her husband who had walked in the procession with the Queen’s coffin from Westminster Hall to the Abbey.

During the service, Harry appeared visibly emotional while Meghan kept stoic in support of her husband.

MORE: Watch: Royals including Prince George and Princess Charlotte sing God Save the King for the first time at Queen’s funeral 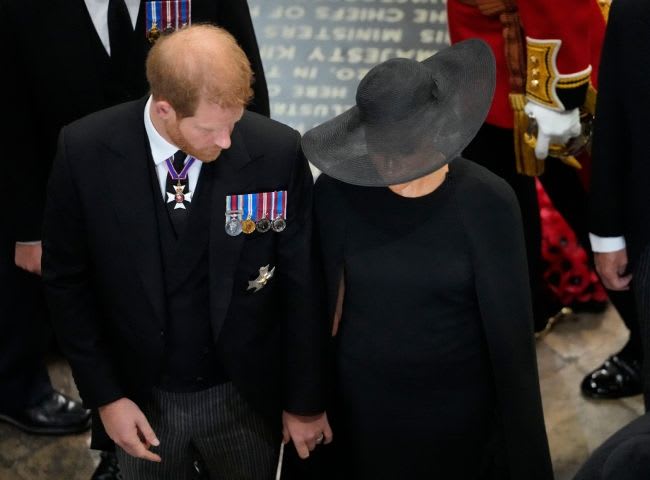 She also remained stoic next to Harry

The Duchess opted for a sleek ebony coat dress and midnight-black pillbox hat adorned with an elegant netted veil, finishing off her look with a pair of delicate pearl earrings for the somber occasion which celebrated the life of Britain’s longest-reigning monarch.

Her outfit was inspired by past moments celebrating the late monarch’s life, with the dress the same style as one worn in 2018 when she celebrated Her Majesty’s 92nd birthday at the Royal Albert Hall, and her hat, by Stephen Jones for Dior, the same style she wore in June for the Queen’s Jubilee celebrations.

MORE: Princess Charlotte pays the ultimate tribute to her great-grandmother with touching accessory

Meghan’s outfit was a tribute to the Queen

The Duchess has previously praised the Queen’s “warm and inviting” presence in her life, adding that her late grandmother-in-law gave her “some beautiful pearl earrings and a matching necklace” for the pair’s first joint engagement together.

It is understood Meghan also wore these earrings for the monarch’s lying in state procession.