James Bond slowly regains consciousness aboard a private jet. A blurred face swims into focus, smiling sardonically — a woman with sea-blue eyes. She says, ‘My name is Pussy Galore.’

‘I must be dreaming,’ murmurs Bond.

The Sixties ushered in a sexual revolution and Honor Blackman was its ultimate symbol — the first woman to challenge Bond on his own terms, in 1964’s Goldfinger, and the leather-clad, karate- kicking superwoman of The Avengers.

After making her name as a blonde bombshell, the actress from the East End with the cut-glass accent, who died yesterday at the age of 94, went on to work until well into her 80s. 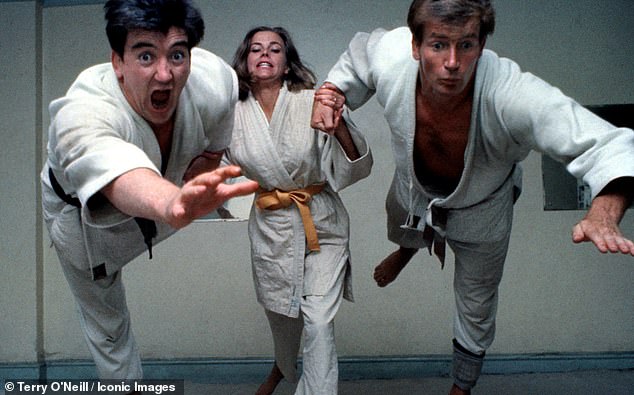 Cast in 1962 opposite Patrick Macnee in The Avengers, a flagging series about British agents thwarting endless plots to take over the world, she was the first woman to assume the lead in gun battles and brawls

In a statement, her family said she died peacefully of natural causes at home in Lewes, East Sussex, surrounded by her family.

‘As well as being a much-adored mother and grandmother,’ it said, ‘Honor was an actor of hugely prolific creative talent; with an extraordinary combination of beauty, brains and physical prowess, along with her unique voice and a dedicated work ethic.’

But no role ever eclipsed her memorable outing as the gangster queen Pussy Galore.

With her own harem of ‘Bond girls’ to carry out heists, she matched 007 blow for blow and quip for quip — even if she did melt into his arms in the final scene.

And as the indomitable Cathy Gale, teamed with her fellow Avenger, debonair spy John Steed, she battered criminal masterminds and their henchmen into submission, while clad in skintight leather. 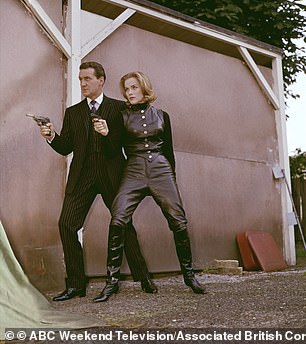 After making her name as a blonde bombshell, the actress from the East End with the cut-glass accent, who died yesterday at the age of 94, went on to work until well into her 80s. She is pictured with Patrick Macnee in The Avengers

Neither cinema nor TV had ever seen a woman like this before. Heroines were feminine, vulnerable, delicate creatures, who needed the protection of a dominant male.

They wore petticoats and high heels, and if they fought it was with other women, biting and scratching like cats.

Honor Blackman turned that sexist image on its head. Cast in 1962 opposite Patrick Macnee in The Avengers, a flagging series about British agents thwarting endless plots to take over the world, she was the first woman to assume the lead in gun battles and brawls.

Cathy Gale was the fighter, Steed was the lover. He dressed like an English city gent, she wore futuristic costumes that combined practicality with sexuality.

As its established star, Macnee was supposed to have the final say on the show’s style. He wanted Cathy to carry a pistol, but couldn’t work out how it should be done: a shoulder holster got tangled up with her bra, and a garter holster left her walking bow-legged.

She might carry a gun in her handbag, but that seemed too matronly.

Dispensing with weapons, he decided they should become masters of martial arts, and called a wartime friend named Rene Burdet, former head of the French Resistance in Marseilles.

Burdet set about teaching Blackman judo throws, but the actress wasn’t happy: ‘It’s all right for you, Patrick,’ she told him firmly.

‘When someone throws you over their head, the world doesn’t see your stocking tops.’

Macnee, a tireless ladies’ man, hit upon the solution while visiting an actress friend in New York. She entertained him wearing skintight leather trousers, high boots and a jerkin. It was, he thought, ideally suited for all kinds of action.

The show’s producers baulked, fearing that leather was too provocative for primetime. But suede didn’t look good under lights, and so leather it had to be. Blackman chose green, which on monochrome TV sets looked black. 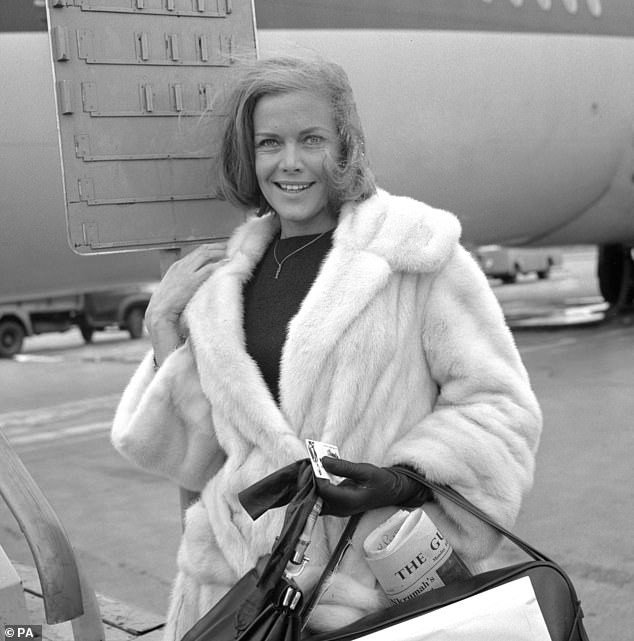 She was widely regarded as Britain’s sexiest actress, a no-nonsense retort to Brigitte Bardot or Marilyn Monroe, but even at her height she couldn’t believe in her own beauty

Her first appearance in 1962 caused a sensation. It had its effect on Macnee, too. After one shoot, he knocked on her dressing room door and, when she asked what he wanted, answered bluntly: ‘You.’

Blackman stood up, put her hands on her hips and said, ‘Come off it. This is neither the time nor the place. I’m sweating like hell, my feet are killing me, I smell like a polecat and the answer’s ‘No’.’

For the rest of his life, Macnee said, Blackman remained a great friend ‘and she still bosses me around’. The sexual tension between them was so evident to audiences that reporters constantly wanted to know whether Steed and Cathy were having an affair behind the cameras.

Decca Records wanted to capitalise on the public frisson and, in 1964, approached them to record novelty song Kinky Boots. Blackman, a talented singer, agreed cheerfully and thought Macnee was being modest when he protested that he was tone deaf with no sense of rhythm.

‘I couldn’t believe there was such a person,’ she said. ‘So I persuaded him and at 5pm on a Saturday when we’d just finished a rehearsal we went off to record it, and Patrick proved he was absolutely right. Oh, it was a nightmare.’ 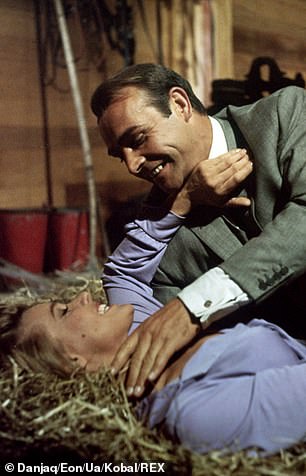 She is pictured above in Goldfinger (1964) with Sean Connery

Eventually, she ordered Macnee across the road to a pub and plied him with brandy. Then she told him to stop trying to sing, and simply speak his lines. Back in the studio, the producer slapped the actor’s shoulder to cue him in for each verse and chorus.

The song (with saucy lyrics by the Mail’s Herbert Kretzmer) flopped on release, though in 1990 it reached No 5 in the charts.

Blackman’s failure as a pop star did not reflect her explosive popularity on screen, and in 1964 Bond producers Cubby Broccoli and Harry Saltzman cast her in Goldfinger, the role that would define her career.

She was widely regarded as Britain’s sexiest actress, a no-nonsense retort to Brigitte Bardot or Marilyn Monroe, but even at her height she couldn’t believe in her own beauty.

‘Looking back, I suppose some of it must have been true,’ she said in her 80s, ‘but I couldn’t relate to it at the time. I didn’t think it was true, brought up as I was. British families then were always afraid that someone would be prideful or arrogant, so my mother made sure I kept my feet on the ground.

‘I remember once as a 17-year-old I was all dolled up to go out, and I thought I looked rather splendid, for me, and I asked my mother, ‘Do I look all right?’ She said, ‘You’ll pass, in a crowd.’ It hurt awfully. All these years later it still rankles.’

Despite the cut-glass accent, she was born in London’s East End, in Plaistow, in 1925. Her father, Frederick, was a civil servant and, she said, ‘a very randy individual’.

He would insist on sex with her mother without notice: ‘He didn’t even help with the washing up and then say, ‘How about it?’ I think they loved each other but he was such a disciplinarian and so demanding that there was a fair amount of fear in the house.’

The family was not well-off. ‘There wasn’t a picture in sight. We didn’t have any money, for God’s sake. We had a ground-floor flat in Chiswick, West London, with two bedrooms, a bathroom and an outside loo.’

For the rest of her life, she said, she bought pictures and ornaments, as a reminder that she was no longer living on the brink of poverty. Her father, a World War I veteran who fought in the trenches for four years, wanted his daughter to have more from life than he ever could.

When she turned 16, he told her she could have a bicycle and then offered her an alternative: elocution lessons. It made up, she said, for the beatings she and her brother endured.

The voice coaching led to a place at Guildhall School of Music and Drama, which she helped fund by working as an office clerk at the Home Office. In the war she became a despatch rider and was nicknamed Top Gear Tessie.

After graduating, she won a succession of minor roles in films such as the disaster movie, A Night To Remember in 1958 and the TV crime serial, The Four Just Men.

Her father died shortly before her breakthrough in The Avengers. ‘That was really, really sad. I don’t think we ever said anything about how we felt about each other. We weren’t those kind of people. I knew he loved me and I think he knew I loved him but nothing was ever verbalised. It was just understood.’

A voracious reader, she wanted to try every kind of role, rather than being typecast in action movies, and her career was notable for its variety. She appeared in Doctor Who, Minder, U.S. detective series Columbo and Coronation Street (as mysterious Rula Romanoff in 2004).

She also proved herself adept at comedy, co-starring in sitcom Never The Twain and appearing in Robin’s Nest. One favourite role came in the long-running ITV sitcom The Upper Hand, starring as Laura West in nearly 100 episodes from 1990 to 1996.

In her 80s, regretting she had not done more Shakespeare and other stage work, she went on tour in a one-woman show, telling stories and answering questions about her career.

The format allowed her to devote time to her family, she said. Divorced twice, she lived alone in a flat in London’s Notting Hill and spent much of her time with her four grandchildren. 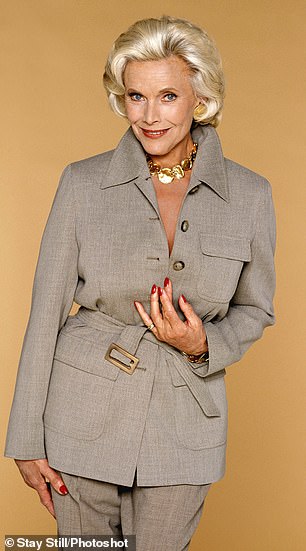 Neither cinema nor TV had ever seen a woman like this before. Heroines were feminine, vulnerable, delicate creatures, who needed the protection of a dominant male. They wore petticoats and high heels, and if they fought it was with other women, biting and scratching like cats. Honor Blackman  turned that sexist image on its head

But she was never a sentimentalist, and sometimes stirred controversy with her outspoken views.

About Sean Connery, her co-star in Goldfinger, she declared in 2012: ‘I disapprove of him strongly now. Because I don’t think you should accept a title from a country and then pay absolutely no tax towards it. He wants it both ways. I don’t think his principles are very high.’

She was equally blunt about the monarchy. After the Queen won acclaim for her scene with Daniel Craig as James Bond at the opening of the 2012 London Olympics, Blackman was scathing: ‘Wasn’t that ridiculous? But everyone seemed to love it. The Queen did play ball, but she surely didn’t enjoy the opening ceremony. She was bored to tears because there were no horses.

‘I’m a republican. I think the Queen has done her duty pretty well, but it has taken her a long time to be a human being, a mother. But she’s doing very well considering her age.’

That last jibe was especially pointed, given that the actress was nine months older than the monarch. Blackman always prided herself on her youthful looks: she never wrote an autobiography, but in 1997 she published How To Look & Feel Half Your Age For The Rest Of Your Life, a manual on skin care and healthy eating.

The regime paid off, even at the end. She liked to say that she maintained the same weight all her life, never putting on more than two pounds after her teens. But a lifetime of compliments failed to convince her that she was ever the beauty everyone claimed.

‘I never considered myself a sex symbol,’ she said. ‘I hate watching myself. I’ve only seen Goldfinger twice: once at the premiere and once at the 50th anniversary.

‘I’ve turned down parts in the past because they required a sexy woman and I didn’t think that was me. I always wanted to play the secretary. I know it’s extraordinary, but it’s the truth.’