It Starts On The Page: Read The Script For Episode 8 Of Michaela Coel’s ‘I May Destroy You’

Michaela Coel’s searing British drama I May Destroy You has just won an armful of BAFTAs, including best writer for Coel herself. So what better time to peer between the pages of her script for the BBC and HBO sexual assault survivor series?

Welcome to Deadline’s It Starts On the Page, a series that highlights the scripts that will serve as the creative backbones of the now-underway TV awards season. These scripts are all being submitted for Emmy Awards consideration this year and have been selected for our series using criteria that includes critical acclaim, selecting from a wide range of networks and platforms, and a mix of established and lesser-known shows.

Coel is the singular voice behind I May Destroy You, and her script for Episode 8, “Line Spectrum Border,” opens with a devastating monologue from her character Arabella Essiedu. She talks to her rape support group about opening their eyes to aggressors like “Bob,” who operate in grey areas of acceptability. The defiant speech is, in some ways, the beating heart of the entire story, the force that drives I May Destroy You’s entire message.

You can read the original words below in Coel’s screenplay. I May Destroy You was produced by Coel’s FALKNA Productions and Various Artists. It is executive produced by Coel, Phil Clarke and Roberto Troni. Simon Meyers produced Episode 8, while Coel and Sam Miller were the directors. 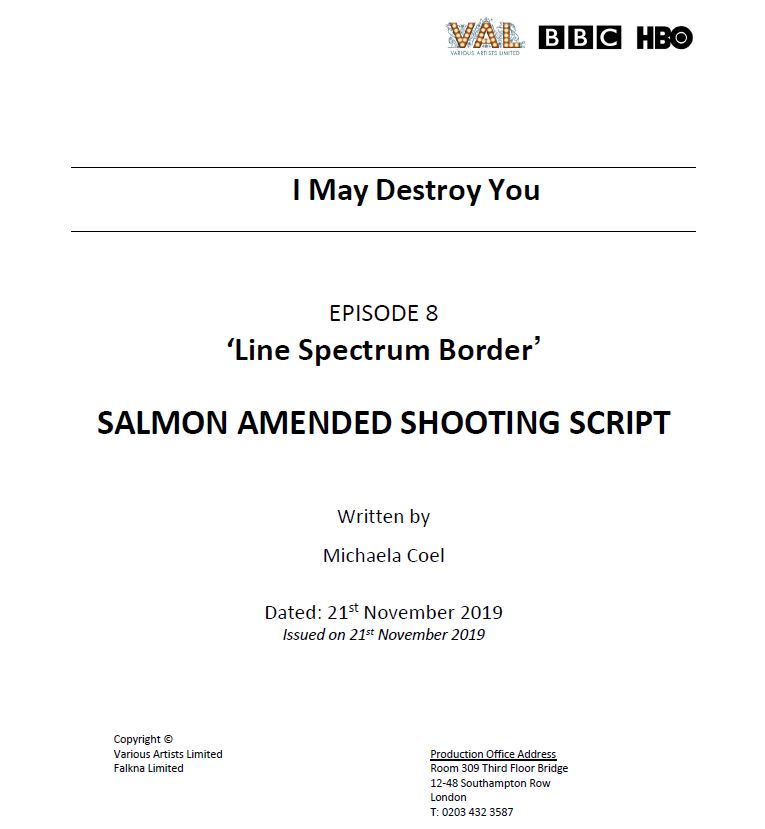 It Starts On The Page

It Starts On The Page: Read The Pilot Script For HBO’s Limited Series ‘Mare Of Easttown’