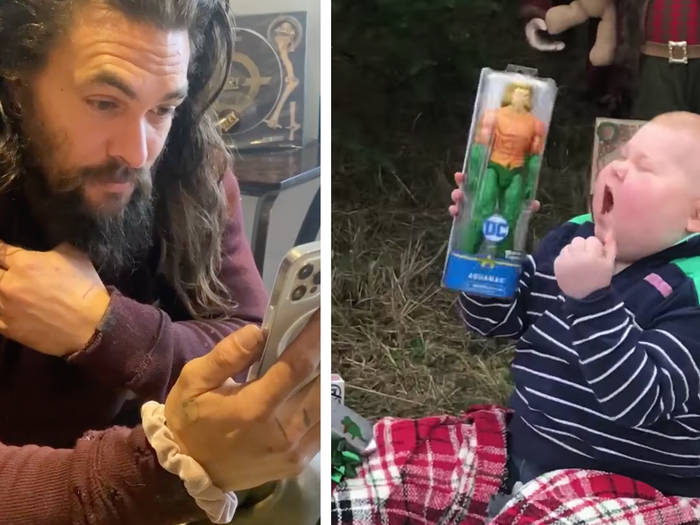 Jason Momoa was a real-life superhero on Wednesday when he FaceTimed a young fan. Seven-year-old Danny Sheehan had gone viral earlier in the week for his overjoyed response at receiving an "Aquaman" action figure as a present.

"I'm so excited," Sheehan can be heard saying during his video chat with Momoa, which the actor shared clips of on social media.

"You are so beautiful. I'm excited," Momoa responds.

Sheehan, like other kids his age, enjoys superhero movies and "Aquaman" is his favorite. Sheehan's mom, Nancy Shaw Sheehan, shared the video of her son reacting to his gift on Sunday. It quickly went viral thanks to the boy's sweet, ecstatic response.

Momoa, who starred as Aquaman in the live-action 2018 movie about the underwater king of Atlantis, saw the sweet reaction video and decided to surprise his young superfan

"So many people posted and forwarded [the video] on various platforms and worked to utilize connections they may have had to get the video to Jason Momoa," Shaw Sheehan told Insider.

"I never thought it would happen and then it did! Within a day, we had word that Jason wanted to talk to Danny. It was surreal," she added.

Shaw Sheehan told Insider that her son didn't know about the phone call until it happened. Sheehan's parents told him that Aquaman might reach out because he probably found out about how much Sheehan admires him "through his special powers." But they made no promises that Aquaman would be able to call because "he's a busy guy saving the world and the ocean."

Sheehan was diagnosed with pineoblastoma, a rare form of brain cancer, in early 2017 when he was 4 years old. According to the Mayo Clinic, this type of cancer affects the part of your brain that produces melatonin, the hormone the balances your sleep cycle, and affects younger children more than it does adults.

"We have exhausted essentially all potential options for treatment over the past (almost) four years of non-stop treatment," she said.

Shaw Sheehan said the family started the Facebook page, where the viral video was posted, as a "therapeutic process."

"Along the way, it became a mission for me to share our ups and downs through our lens of positivity and hope to inspire others who may be struggling in their own daily lives — whether it be with cancer or whatever," Shaw Sheehan told Insider.

In the clip from the call that Momoa shared, he and Sheehan chat about dolphins, sharks, and, of course, Sheehan's new favorite toy.

Momoa also shared a link to the family's GoFundMe page, encouraging his followers to read Sheehan's story and donate.

"I would imagine that many parents with a terminally ill child don't look forward to the future when they know their child will no longer be by their side," Shaw Sheehan told Insider. "And they fear their child being forgotten by others. And that their memory will not live on as inertia of life pulls people forward, and the silence where laughter used to be."

Nevertheless, she added, "we have had this experience and we know that Danny has touched so many lives. That brings comfort."

Jason Momoa's representatives did not immediately respond to Insider's request for comment.

Related Posts:
World News
How Phil Spector’s wild hair disappeared behind bars as murderous monster served jail-term
Capitol rioter Guy Wesley Reffitt threatened to shoot his own KIDS if they turned him in after siege
QAnon Rep. Marjorie Taylor Greene instantly lashes out at Twitter as she returns to app after suspension
Kent district yet to give Covid vaccine to any over-80s despite high death rate
‘Up-armored’ National Guard Humvee stolen in California, FBI says
Recent Posts
This website uses cookies to improve your user experience and to provide you with advertisements that are relevant to your interests. By continuing to browse the site you are agreeing to our use of cookies.Ok