Jeremy Clarkson has turned on Nicola Sturgeon over the “silly noises” she’s making. The Top Gear star hit out at the leader of the SNP in his latest column.

The 60-year-old reacted to her “daft” decision to shut all pubs, bars and restaurants in the central belt of Scotland.

The move came into effect last night and will last for 16 days in total.

Jeremy spoke out on the 50-year-old and her latest move, urging her to “move on”.

He did not hold back in his piece, titled: “It’s time Nicola Sturgeon forgave the English – I’ve even made up with Piers Morgan.” 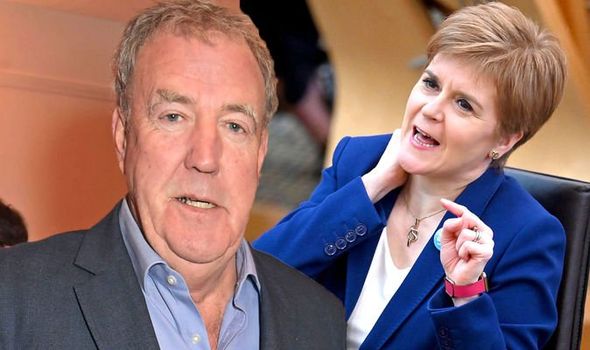 The Grand Tour host was referencing his long-running row with the Good Morning Britain host.

The pair have since made a truce after a five-hour drinking session in the summer of 2014.

Jeremy did not revisit his row with Piers, 55, but instead slammed the politician.

After mocking her monogrammed face mask, he started: “I’ve been worrying about Nicky From The North for some time now because she seems to be consumed, above all else, with a hatred of the English in general and Boris Johnson in particular.

“… She knew that the economic damage she caused by closing everything down would have to be mended, ultimately, by tax-payers in England.”

The Scottish Government have this week toughened coronavirus restrictions further, in a bid to slow the spread of the virus.

These included closing pubs and restaurants both indoors and outdoors, from 6pm yesterday.

The stricter restrictions apply to the Greater Glasgow and Clyde, Lanarkshire, Ayrshire and Arran, Lothian and Forth Valley health board areas.

Licensed premises will remain closed until October 25, but can still serve takeaways.

Jeremy continued for The Sun: “Everything she does is not for the good of the people of Scotland. It’s to b****r up life for everyone south of the border.

“… Listen to her and you get to thinking that the whole place is full of Mel Gibsons running about with blue faces. But it isn’t.”

He was of course referencing the A-lister’s role in 1995 film Braveheart.

It comes after Jeremy spent 10 days filming in Scotland, saying he expected to be met with animosity and “hail of burning arrows”.

The TV star added: “But apart from one weird-beard in a Jeep, who called me a ‘d***head’ and my colleagues ‘t**s’, everyone was as welcoming as could be.

“She still seems to be fighting the Battle of Falkirk, which ended 722 years ago. It’s time to move on.”