King Von reportedly shot in Atlanta but is not dead

Rumors hit on Friday that Chicago rapper King Von was shot in Atlanta. However, emerging reports suggest he survived the shooting.

There are conflicting reports about his current condition.

According to WSB-TV, Atlanta police and the Georgia Bureau of Investigation are investigating a shooting involving two off-duty officers and three others outside the Monaco Hookah Lounge in downtown Atlanta.

Two unnamed individuals died and one is reportedly in critical condition. The two others involved are stable, according to the local news report.

King Von, whose real name is Dayvon Daquan Bennett, was not mentioned in the report.

However, The Neighborhood Talk — a social media news outlet — claims the rapper was shot but survived the incident. Monsters & Critics have not been able to independently verify the story. 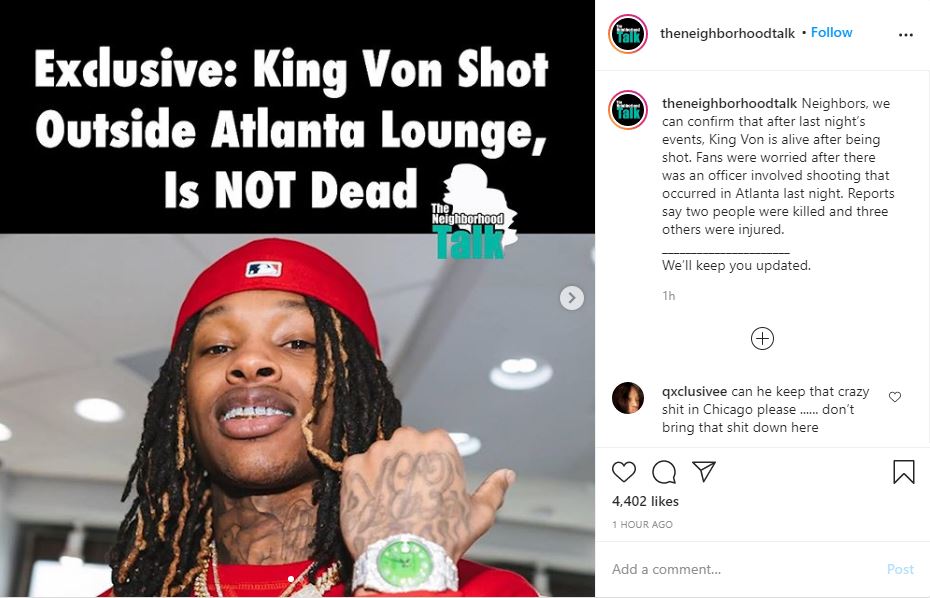 The 26-year-old rapper released his debut album Welcome to O’Block last week and is on a promotional tour. 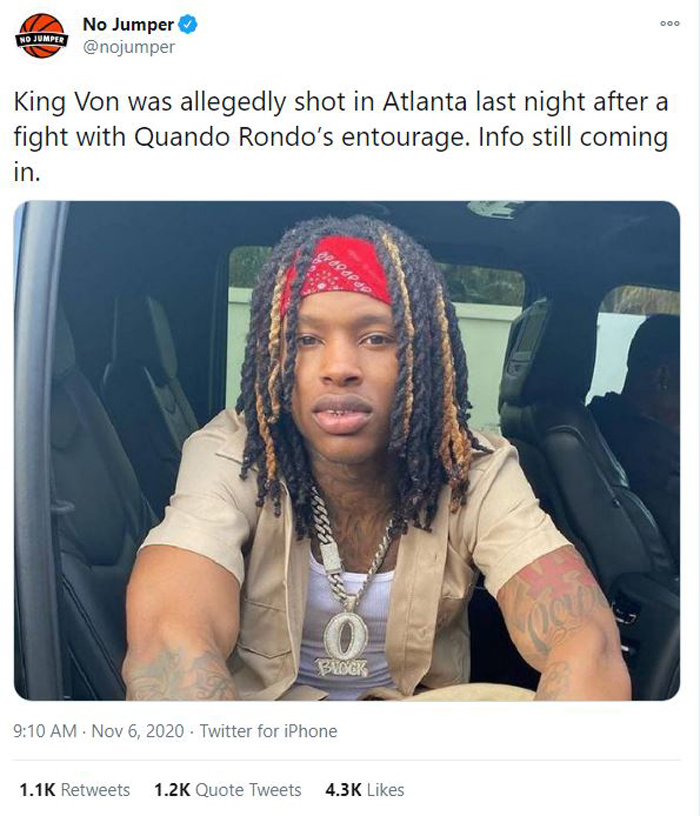 Two off-duty police officers attempted to intervene when the shooting occurred. Many fans believe the rapper was killed during the incident, leading to his death trending on social media.

The rapper tweeted at 8:03 AM from his iPhone about music with the following: “Put me on any beat. Imma Murda dat bi**h. It’s jus wat I do.”

King Von was charged with murder in 2014

King Von, who is signed to his cousin — popular Chicago rapper Lil Durk — was charged with one count of murder and two counts of attempted murder in 2014.

The incident involved the death of Malcolm Stuckey and the wounding of two individuals during a party in Englewood, Chicago.

He was acquitted after witnesses failed to testify.

Due to his criminal history, he has been subject to multiple rumors involving shootings and feuds with other rap artists.

King Von was arrested for a shooting in Atlanta last year

Last year, King Von and Lil Durk were arrested in connection to a shooting in Atlanta.

They were both granted bond and the trail is ongoing at the time of this report. The Chicago rappers are not allowed to be around each other due to the criminal charges they are currently facing.

It appears that his ongoing trial in Atlanta has given credence to the rumor that he was killed in Atlanta. However, The Neighbourhood Talk is reporting that the rapper is “okay,” after being shot.