You could say Lin-Manuel Miranda is on top of the world.

After being postponed amid the coronavirus pandemic, In the Heights is finally in theaters for the whole world to enjoy. It’s been a bumpy journey for the musical, but it couldn’t be coming out at a better time. ET’s Rachel Smith spoke with the creator of the Broadway musical at the film adaptation’s premiere at the Tribeca Film Festival opening night, where he touched on the “pretty wild” opportunity to bring the film to Washington Heights and having Oprah Winfrey’s full support.

“Yes [it’s a full-circle moment]. It’s dreams, it’s a seven-layer cake of dreams. I grew up here, I love it here, I married someone that grew up here and loves it here. We raised our kids here,” Miranda told ET of having the premiere in his neighborhood. “And now this love letter to the community, which we got to film in the community, is premiering.”

In the Heights follows Usnavi, played by Anthony Ramos, a Washington Heights native who has mixed feelings about closing his store and retiring to the Dominican Republic after inheriting his grandmother’s fortune. The story also centers on the Manhattan neighborhood’s people, heritage and their goals and aspirations.

The first production, starring Miranda as Usnavi, premiered in 2005 before it opened on Broadway in March 2008. It was nominated for 13 Tony Awards and won four, including Best Musical.

'In the Heights' Trailer No. 1

'In the Heights' Trailer No. 1

To celebrate the highly anticipated musical, Winfrey is hosting a virtual block party on Oprah Daily. She enthusiastically shared the news in an Instagram video that instantly put a smile on Miranda’s face — and left him in shock!

“Her saying my name or rather singing my name is my outgoing voicemail,” Miranda joked. “Like, that was the first time I had changed it in 10 years. And now it’s Lin-Manuel Miraaandaaa! It’s pretty wild.”

And here is when the second full-circle moment comes for the multifaceted Miranda. “When she was ending her show, I paid more money than I could afford to take my mom to Chicago to one of her last live tapes of the Oprah Winfrey Show,” he recalls. “So then to have her saying those things about me…my mom has ascended to another plane. She’s still with us, but she’s on another plane because of that IG post.”

It was a family affair at Wednesday’s premiere, with the majority of the Latin-leading cast, including Ramos, Jimmy Smits, Leslie Grace, Melissa Barrera, Dascha Polanco, Olga Merediz, Marc Anthony and director Jon M. Chu, among others, in attendance. Manuel expressed that this is the perfect time for In the Heights to come out after a devastating year.

“We are just starting to safely gather in the community again. This movie is a love letter to the power of community. It was filmed in the summer of 2019, so it’s a reminder of what life could be,” he explained. “It’s like, remember kissing? Remember hugging? Remember hugging each other in the streets when we saw each other? It’s the power of what we can be when we are in a community together, to watch it together I think is incredibly powerful.” 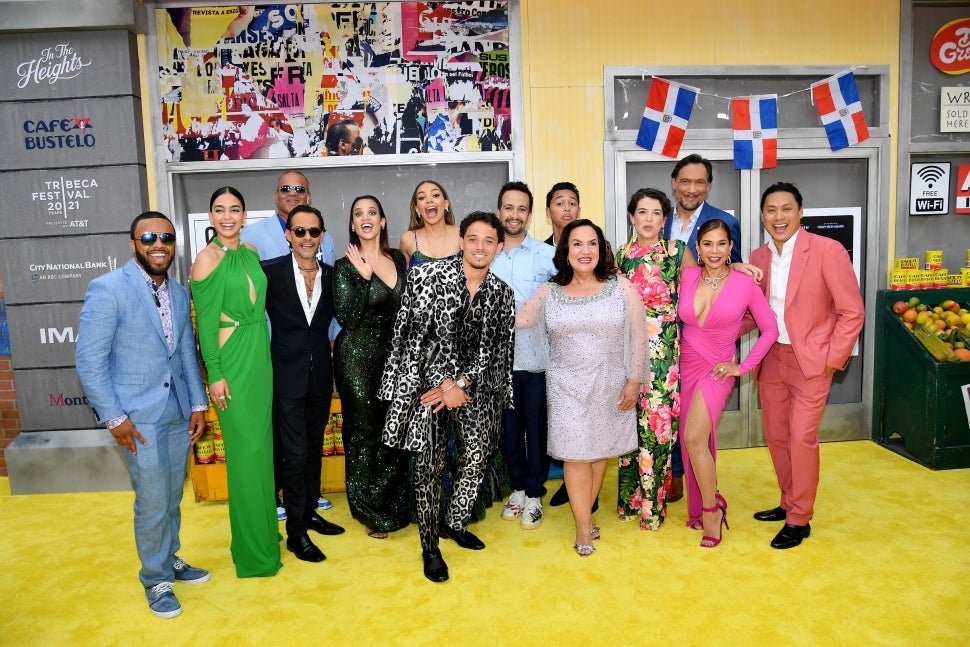 It’s only up from here for Miranda, who next will be releasing his feature directorial debut with tick, tick…BOOM! The film is an adaptation of the autobiographical musical by Jonathan Larson, who revolutionized theater as the creator of Rent. The Pulitzer Prize and Tony winner said it “feels good” to take his talents behind the screen, noting that he had great directors helping him along the way.

“It feels good because I had Jon M. Chu on speed dial. Whenever I had a question or a concern,” he expressed. “Honestly, to work with him, to work with Rob Marshall on Mary Poppins Returns, to work with Tommy Kail on Fosse/Verdon, that was my graduate school. That was my film school. Every post-Hamilton project has been me learning how to do this. So I hope I’m ready.”

In the Heights is now in theaters and available on HBO Max. Watch the video below to hear how the In The Heights cast is already down for a sequel.

'In the Heights' Cast Is Pushing for a Sequel and Already Has Ideas About What's Next! (Exclusive)