Madonna Dotes On Her Twins, 8, While Watching Son David’s Soccer Game From The Sidelines

Madonna played attentive soccer mom at son David’s game and made it a family affair, bringing along her eight-year-old twins and her boyfriend Ahlamalik Williams, 27.

While Madonna, 62, still loves to shock her fans with risque Instagram photos, she showed off her maternal side in a series of sweet May 10 IG photos cheering on her 15-year-old son David Banda at one of his soccer games. The pop icon brought along her eight-year-old twin daughters Stella and Estere, who she adopted from Malawi in 2017. The adorable young ladies dressed identically in black long sleeved shirts and green camouflage pants. Madonna was seen in one photo doting on one of the girls by lovingly putting her hand on the twin’s shoulder.

The pop icon dressed appropriately yet stylishly to watch from the sidelines, wearing a Marcell Von Berlin long sleeved, zip-front denim jumpsuit. She donned Anna-Karin Karlsson La Croix Optical frame glasses in an opal hue so she could better see the game, as David is quite the soccer phenom. He even scored a goal to help his team win 3-1.

Madge added some extra style points with a chic black tilted-brim fedora hat to keep her fair facial skin protected from the bright sun. To offset her denim overalls, the “Ray of Light” singer wore multiple necklaces by Lana Jewelry, and a gorgeous blue pendant on a long chain by Eli Halili. 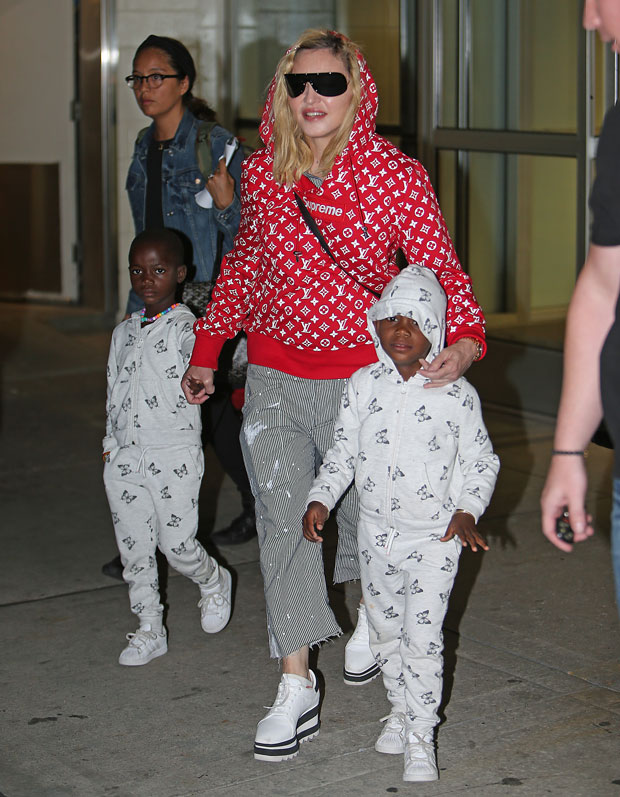 The singer was joined on the sidelines by her 27-year-old boyfriend Ahlamalik Williams. They could be seen in one photo sitting on the grass like any other famly members cheering on the teens on the field. Madonna didn’t even bother to use a chair or a blanket, just plopping down on the grass sideline with no fuss.

Madonna’s son David got the honor of the final photograph among the group of 10 snapshots that the “Justify My Love” singer shared with her 16 million Instagram followers. The pop legend celebrated how it ended up being the best Mother’s Day for her in a video from the day that showed David in action on the field. It even showed him scoring a goal that helped lead his team to a 3-1 victory. “Best Mother’s Day Gift!” she wrote in the video’s caption about her son’s performance. At the end following the game, David approached his mom and wished her a “Happy Mother’s Day” while she hugged him and exclaimed, “Oh my God, you scored a goal” as David lifted his proud mom up in his arms. So sweet!