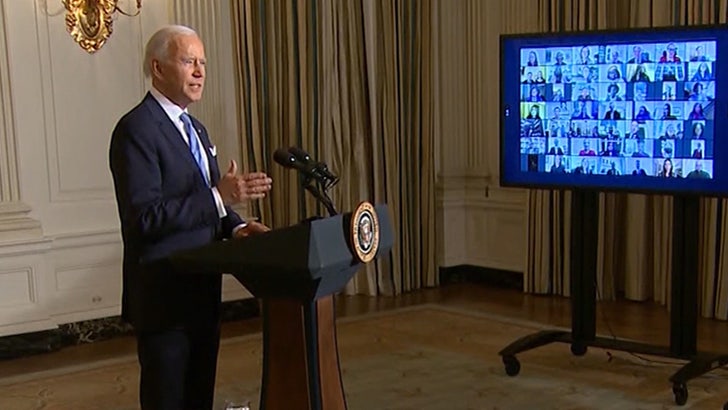 3:50 PM PT — Biden’s laying down the law right off the bat with his team at The White House … letting them know he won’t hesitate to fire any one of them if he catches them disrespecting or talking down to a colleague.

The new Prez was swearing in his political appointees when he dropped the hammer and threw some shade at the previous administration at the same time … saying people getting treated with “decency and dignity” has been missing the past 4 years.

It’s kind of ironic … Biden’s threatening to use Trump’s old catchphrase — You’re fired! — if his staff acts in a way he’s suggesting is Trump-like.

2:19 PM PT — President Biden is now at The White House for the first time since taking office, and he shared a hug with his wife, Jill, before walking in with his family. 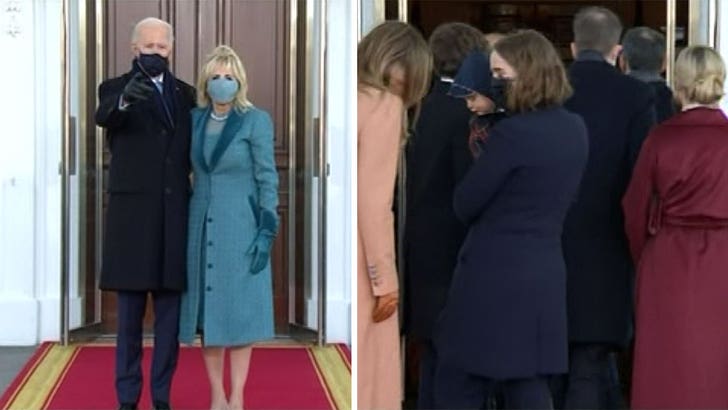 Biden was accompanied by Vice President Harris and her husband, Doug, and the new Prez is getting to work right away in the Oval Office … by taking 17 executive actions aimed at addressing the COVID-19 pandemic, and reversing some of Trump’s signature policies. 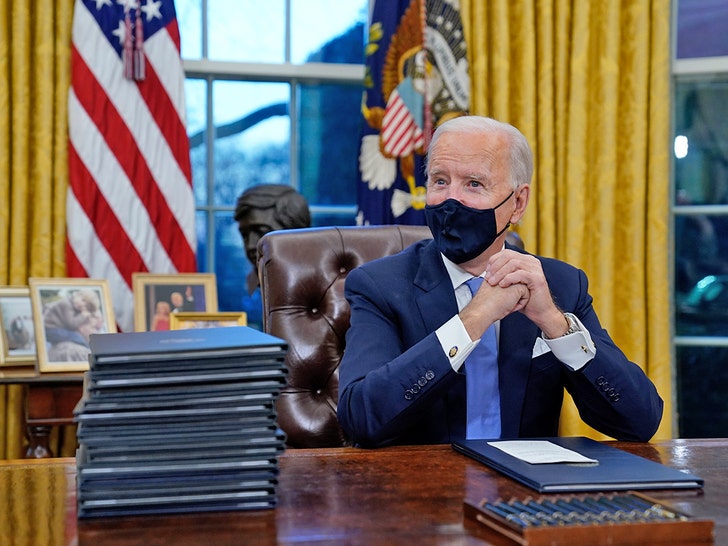 Biden also addressed the note his predecessor left behind for him, calling it “very generous” but saying he’s going to keep it private for now.

The Bidens’ arrival at their new home was around 4 PM in D.C. as the “Parade Across America” virtual inaugural celebration was going off … hosted by Tony Goldwyn from “Scandal” and featuring appearances by Jon Stewart and the New Radicals. It closed with an awesome “Dance Across America” montage after honoring many of the country’s everyday heroes.

9:16 AM PT — Joe Biden just delivered his Inauguration speech as the 46th President, and it was all about America’s resilience and the need to unite under a new chapter in the country.

Biden laid out the challenges facing the U.S. at large — including perhaps the most pressing being the pandemic, for which he led a moment of silence and a prayer — and vowed that his whole soul was in the cause of moving us forward together, to get past the ugliness that’s been exposed among so many of us of late. 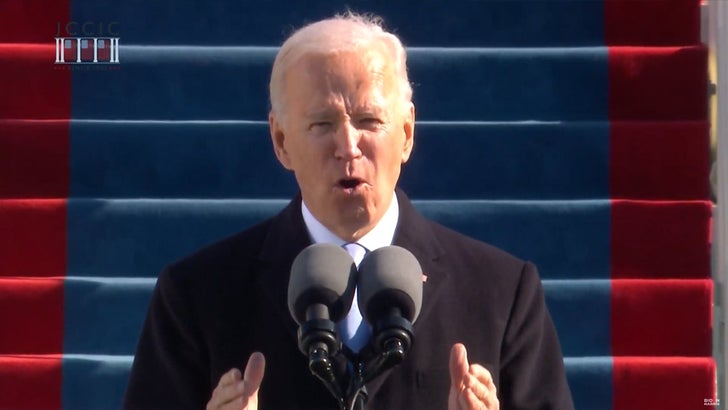 Biden says we must meet this moment as the UNITED States of America — adding that America has never failed in that regard. He urged us to start fresh, to listen to one another … and to respect one another. He also said this … not every disagreement has to result in war.

He had very telling line at one point, saying … “We’ll lead not merely by the example of our power, but by the power of our example” as he was addressing foreign nations looking to see what the U.S. would do next.

The speech was both realistic, yet hopeful … and definitely a change of pace from what we’ve experienced of late. After Joe’s remarks, Garth Brooks performed “Amazing Grace,” capping off an inauguration that went as well as one could hope.

8:53 AM PT — Joe Biden and Kamala Harris have officially been sworn in as the 46th President and Vice President of United States, taking their oaths of office from two Supreme Court Justices … Chief Justice John Roberts and Justice Sonia Sotomayor, respectively. 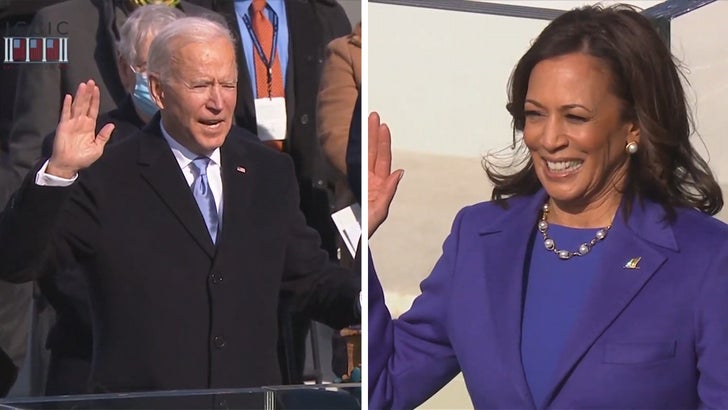 Prior to Vice President Harris taking her oath, Lady Gaga came out and sang the National Anthem in a very unique outfit — complete with what appeared to be a golden dove broach. After her, Jennifer Lopez came out to sing “America the Beautiful” ahead of Biden’s swearing-in … and both performances went off without a hitch. 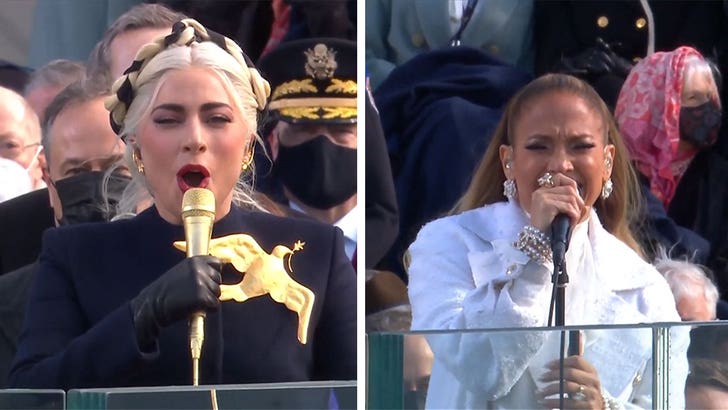 J Lo said a part of the Pledge of Allegiance in Spanish, to rousing applause.

It’s been a looooong journey, but Joe Biden‘s big day is finally here — he’ll be sworn in as 46th President of the United States in an inauguration ceremony unlike any other in American history … and you can watch it live right here.

The President-elect and Vice President-elect, Kamala Harris, are set to be sworn in Wednesday in D.C. shortly after noon, and then Biden will deliver his first presidential address to the nation.

Along the way during the “America United”-themed Inauguration Day, many of the normal ceremonial displays, tributes to the troops, A-list performances and former presidents will be featured, but otherwise … it will be far from normal.

That’s because COVID-19 continues to ravage the country, and because 2 weeks ago … pro-Trump rioters stormed the U.S. Capitol and wreaked havoc in a coup attempt that resulted in multiple deaths.

For a combination of those reasons, Biden’s inauguration will not draw a large crowd — in fact, his team hopes it’s the smallest ever, with folks opting to watch at home — nor will it be followed up by a series of inauguration balls.

Instead, there will be a heavy police and security presence … as the threat of more violence continues to loom large following the Capitol riots.

And, of course, Biden’s inauguration will be different due to the fact for the first time since Andrew Johnson left office in 1869 … the outgoing President, Donald Trump, is choosing to skip it. VP Mike Pence will attend, along with past presidents Barack Obama, George W. Bush and Bill Clinton and their former first ladies Michelle Obama, Laura Bush and Hillary Clinton.

If all goes well though, the only other big news of the day will be the performances of Lady Gaga, Jennifer Lopez, Bruce Springsteen and Garth Brooks, a virtual parade … and the inauguration television special called “Celebrating America” hosted by Tom Hanks. 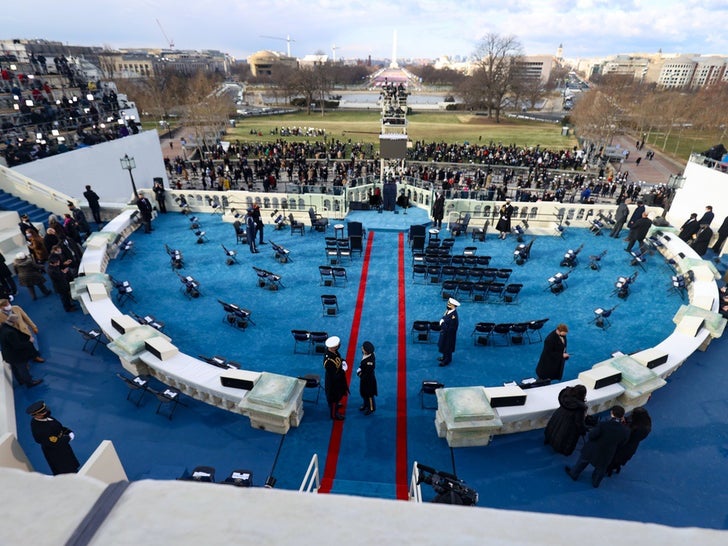 Hopefully, America gets that lucky.