From the moment Prince Harry and Meghan Markle’s relationship leaked in the press, the former actor has been compared to Princess Diana. Almost anyone who’s glossed over a tabloid can see the clear similarities. Prior to establishing themselves within the crown, Meghan lived in a sorority house and Diana had three flatmates. They both were estranged from a parent (Diana’s mother left when she was five years old, and Meghan’s father continuously runs his mouth in the press), but beyond all, the pair famously struggled to adjust to royal life. The only clear difference is that one decided to stay — and ultimately had her life tragically cut short — and the other decided to save herself.

Meghan’s likeness to the Princess of Wales motivated the pair’s exit from the crown as Harry feared “history was repeating itself” amidst Meghan’s widespread mistreatment in the press. “My mother was chased to her death while she was in a relationship with someone that wasn’t white and now look what’s happened,” he told Oprah Winfrey in their bombshell interview (via People). “You want to talk about history repeating itself, they’re not going to stop until [Meghan] dies.”

A shared struggle isn’t the only place in which Meghan can relate to her late mother-in-law. In this exclusive interview, Princess Diana’s former vocal coach and author of “Diana Voice of Change,” Stewart Pearce, explains how the pair’s voices are their ultimate similarity. 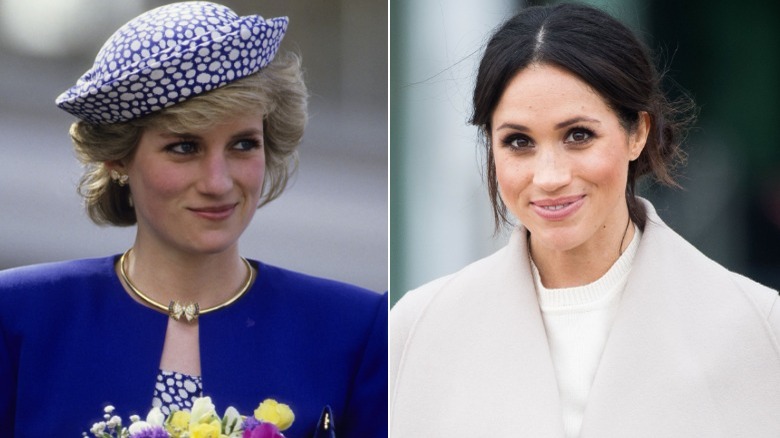 Both Princess Diana and Meghan Markle possessed a unique sense of candor for members of a historically tight-lipped family. Meghan has been extraordinarily open about experiencing suicidal thoughts amidst widespread disparaging — and frankly, racist — tabloid headlines, but decades prior to the Sussexes’ Oprah Winfrey interview or Meghan’s heartbreaking essay about miscarriage, Princess Diana opened up in a similarly shocking interview with Martin Bashir. Though it’s come to be a source of controversy, it was the first place she revealed her struggle with bulimia and confirmed her husband’s affair.

“I feel that [Meghan and Diana] mirror one another in terms of the fact that they’re vessels of change to help the women of the world to move forward into being able to speak about the tyranny and the deceit that they’ve experienced from the men in their lives,” Pearce tells Nicki Swift. “… Or for example, in this case, the men who are actually controlling the Royal establishment.”

As Pearce notes, those men aren’t specifically members of the royal family but rather the “men in gray suits” who “ignored” Meghan when she asked for help. “Now that’s the energy that needs to change,” he says. Pearce believes that both Meghan and Diana’s willingness to crack the opaque windows of the palace is “the force that will bring about that mighty change.” As for whether or not Princess Diana would approve of the Sussexes jumping ship and moving to the United States, Pearce believes she “would have been in full support.”

Stewart Pearce’s book, “Diana the Voice of Change,” is available today via Amazon or bookstores everywhere.

If you or anyone you know is having suicidal thoughts, please call the National Suicide Prevention Lifeline​ at​ 1-800-273-TALK (8255)​.