Former “Bachelorette” star Rachel Lindsay spoke out about her time as the franchise’s first female Black lead and the toxic fandom surrounding the reality TV series she has dubbed “Bachelor Klan.”

Lindsay, who also appeared on “Bachelor in Paradise” and “The Bachelor,” said the “Klan” is a group within the Bachelor Nation fandom she feels is “hateful, racist, misogynistic, xenophobic, and homophobic.” She explained how the “Klan’s” behavior online ultimately led her to cut ties with the ABC franchise.

The lawyer, 36, wrote in a New York Magazine cover story op-ed, published online Monday by Vulture, that the “franchise has spent 19 years cultivating a toxic audience. They have constantly given it a product it wants: a midwestern/southern white, blonde, light-eyed Christian. Not all viewers are like that.”

Lindsay explained how she really felt the wrath of the bullying after her interview with ousted host Chris Harrison during which he defended contestant Rachael Kirkconnell for attending an “Antebellum South” themed party in college.

‘Bachelor’ host Chris Harrison (right) conducted an interview with former ‘Bachelorette’ Rachel Lindsay (left) that received a great deal of backlash over his comments regarding a contestant who attended an Antebellum-themed party.
(ABC)

“He wasn’t defending Rachael, he repeated over and over during the 15-minute segment in which he essentially did just that. If I had gone to that party, I asked him, what would I represent? He told me that 50 million people had attended a party like this,” Lindsay said. “I maintained that attending such a party was not a good look, to which he responded, ‘Is it not a good look in 2018, or is it not a good look in 2021?’ As if things couldn’t have been considered racist in 2018. He called for sympathy for ‘this poor girl, Rachael.’ He said all this with a passion I had never seen him assert. And neither, I think, had America. We had only seen Chris Harrison perform as a host; this was like catching him with a hot mic.”

She also wrote about a “staged” moment on Nick Viall’s season of “The Bachelor” when she was a contestant and his eventual winner, Vanessa Grimaldi, accused her of being a bully.

“Immediately, I felt my Blackness was on display. I knew the audience was going to look at me as an angry Black female,” Lindsay recalled. “In true lawyer fashion, I said, ‘That’s an extreme word. I’m going to need specific examples of how I bullied you.’ She cited things like how I didn’t look her in the eye during a conversation. I laughed. ‘That’s not bullying,’ I said. ‘That just means I’m probably not f—ing with you.’ She kept going. ‘You’ve ostracized me in the house.’ (I thought, ‘No, you did that to yourself.) I never raised my voice because I was aware of what was going on. When she started getting emotional, I knew, This is going to be bad. She’s crying; I’m not. I’m going to look cold. We did not come to any type of agreement. (I am happy to say that, in real life, we put our differences aside and have a great and supportive relationship.)” 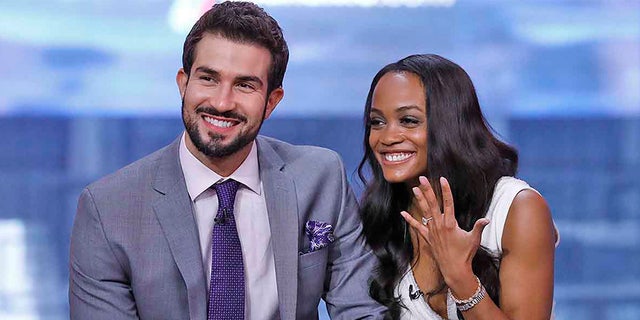 Rachel Lindsay got engaged to Bryan Abasolo on the finale of "The Bachelorette."
(Heidi Gutman/Walt Disney Television via Getty Images)

She described, “When it was over, I stormed out — and of course the producers said, ‘Let’s talk about that. Why would you not show emotion?’ I lost it in the interview. I was bawling. I tried to explain, ‘You do not understand what it is to be a Black woman in this house full of white folks and for a white woman to cry in your face and call you a bully.’ Did she call any of the other women a bully? No, she picked me. One, because she knew I was a threat — Nick liked me the second most. Two, I felt she was projecting an unconscious bias onto me. I said, ‘I hope y’all show this in its entirety.’ An executive producer pulled me to the side and said, ‘This will never air.'”

Lindsay ended her essay by wishing Michelle Young, the next Black Bachelorette, well on her upcoming season. “I’ll cautiously sit back and watch,” she said.