Rich The Kid Makes it Rain on Rodeo Drive, Fans Get Cash, He Gets a Ticket 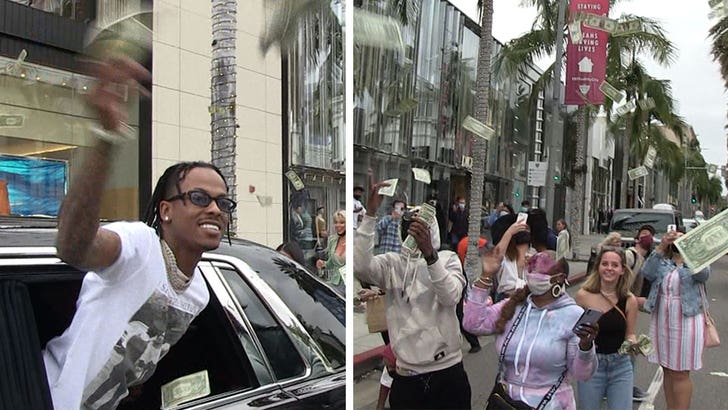 Rich the Kid‘s injecting his own stimulus package … for those lucky enough to catch it on Rodeo Drive ’cause that’s where he was making it rain.

The rapper pulled up in his expensive Maybach on Thursday right outside the Burberry and Louis Vuitton stores in Beverly Hills, where he started throwing wads of cash in the air. It wasn’t long before a throng of fans — of the rapper and money, of course — showed up to catch it.

Our guy asks him how much he’s throwing but it’s hard to tell if RTK gives a direct answer. He wishes a woman happy birthday before pulling out another wad of bills.

Then, things get interesting … for Rich, anyway.

You can see near the end of the video he’s taking a selfie and 2 police motorcycles pull up behind him. RTK’s driver takes off … and the cops follow right behind him. We never saw the sirens and lights go on, but our law enforcement sources tell us Rich did end up getting a ticket … for littering. That’s gonna cost him a few more dollar bills.

BTW … Rich was definitely in a celebratory mood ’cause we’re told he had just been inside the Patek Philippe store on the eve of dropping his new track, “Richard Mille Patek.”

Fun fact: There are 2 things you’re allowed to litter in Cali … water and chicken feathers.