After months of dating speculation, a report now claims that Rihanna and A$AP Rocky actually ARE dating! This big news arrives shortly after the longtime friends were reportedly seen at a cozy restaurant in NYC over Thanksgiving weekend.

Could all those longstanding romance rumors actually be true? Rihanna and A$AP Rocky are reportedly “dating,” according to a report from PEOPLE that surfaced on Nov. 30! HollywoodLife has reached out to both Rihanna’s and A$AP Rocky’s reps for comment. The outlet’s source didn’t disclose further details, although this headline-making report arrived on the same day of another one. 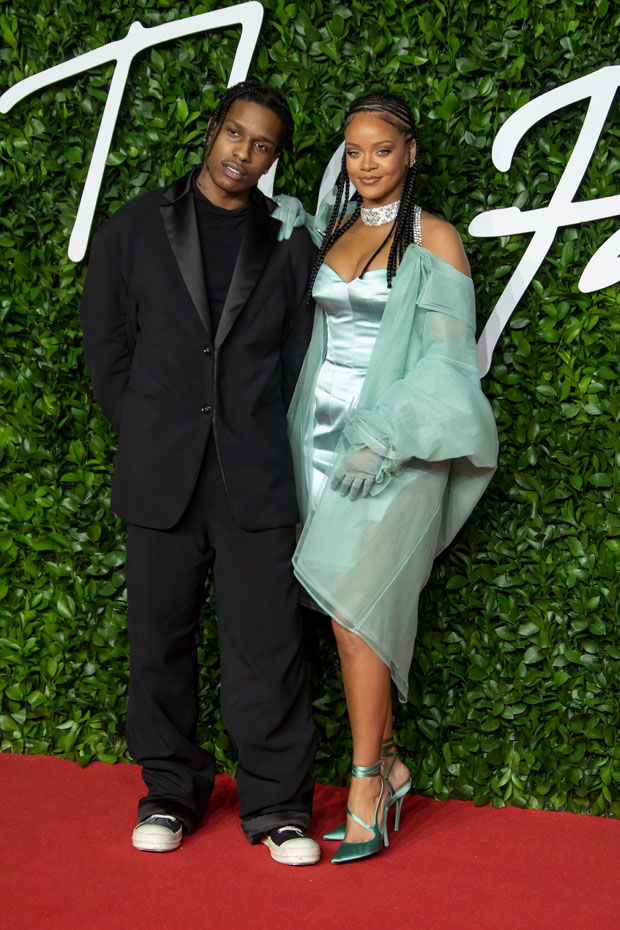 The 32-year-old music artists were apparently seen “having dinner with friends at the Beatrice Inn in New York” and “were seated discreetly behind a curtain” inside the upscale restaurant on Nov. 28, two days after Thanksgiving, per Page Six. There has been heavy speculation surrounding Rihanna and A$AP Rocky’s close relationship, however, since Jan. 2020. This is when RiRi reportedly split from her boyfriend of nearly three years, billionaire Hassan Jameel — on the very same day the breakup report surfaced, Rihanna was seen hanging out with none other than A$AP Rocky at the Yams Day Benefit Concert in New York City!

At the time, we learned that Rihanna and A$AP Rocky were just friends (as they had been for years). “Rihanna is good friends with Rocky,” a friend of Rihanna’s EXCLUSIVELY told HollywoodLife at the beginning of 2020, adding, “They have met up many times over the past year to hang out but suddenly people are paying attention and looking to turn it into something more. They have a long history of hanging out and are very good friends and will continue to be. They aren’t dating though, she isn’t interested in another relationship right now, she’s still getting over Hassan.” However, the dating rumors persisted when the friends were spotted having a dinner date at The Nice Guy in Los Angeles in February.

Fans also couldn’t help but point out Rihanna and A$AP Rocky’s chemistry together when they did joint video interviews for Vogue and GQ in Aug. 2020. The pals were promoting a collaboration together, since A$AP Rocky (real name Rakim Mayers) joined Rihanna’s Fenty Skin campaign in July. Their conversations seemed very flirty to fans, especially during the interview for GQ. In that particular interview, Rihanna and A$AP Rocky both asked one another what their “skin type” was: A$AP Rocky said it was “handsome,” which RiRi rolled her eyes at. Meanwhile, Rihanna said, “My skin type is just as complicated as men are. Y’all always try to say women are complicated [but] it’s y’all!”

During the interview, A$AP Rocky also gave more insight into his sweet friendship with Rihanna. “I think the hardest part about working with you is not goofin’ off and laughing the whole time. Like this s— is comedy,” the “Praise the Lord” rapper admitted. He continued, “That’s the hardest part. You know, people be so cool it’s hard not to, not to laugh. That’s all. But it was fun. The hardest part is not having too much fun. You just forget that it’s still work at the end of the day.”

Rihanna and A$AP Rocky go way back! A$AP Rocky was actually the opening act for the U.S. performances on Rihanna’s Diamonds World Tour in 2013, which is the same year they co-starred as on-screen lovers in A$AP Rocky’s music video for his track “Fashion Killa” (which you can watch above). He also lent his vocals to a remix of the Fenty entrepreneur’s 2013 track, “Cockiness (Love It).”