Britney Spears Doc Sparks Re-Examination of Celebrity: ‘The World Has Finally Woken Up’

Another earnings season is coming to a close, but we’ve been left with plenty to digest.

Even by typical earnings season standards, this recent stretch offered a lot to digest for those in the entertainment, media and tech space — from Facebook and Twitter’s growing concerns with Apple to Amazon co-founder and CEO Jeff Bezos announcing he was stepping down later this year.

If you haven’t been pouring over earnings reports lately, that’s fine; here are the five things you need to know:

You know you’re big when you make other Big Tech companies sweat. That’s the case for Apple, which is now valued at $2.16 trillion and remains the world’s richest company. But the gap between Apple and the other Silicon Valley tech giants was even more evident this earnings season, with both Twitter and Facebook warning their investors that upcoming changes to Apple’s iOS system could hurt their businesses in the year ahead.

The concern for Twitter and Facebook boils down to this: Apple’s next iOS 14 update will require iPhone owners to grant permission for apps to track their data across other apps. That’s a problem for Twitter and Facebook because it limits their ability to craft user profiles and help their ad partners better target users. Facebook CFO David Wehner warned shareholders the full impact of Apple’s changes remains “uncertain,” but that it will likely hit Facebook’s ad business by the end of this quarter. CEO Mark Zuckerberg’s comments were even more alarming for shareholders: “Millions of businesses around the world” would be hurt by Apple’s new privacy update. That’s obviously bad for Facebook, which depends almost exclusively on ad revenue from smaller companies.

Apple CEO Tim Cook shot back a day later. During a speech at a privacy conference in Brussels, Cook, without naming Facebook specifically, said “if a business is built on misleading users, on data exploitation, on choices that are no choices at all, it does not deserve our praise. It deserves reform.”

Twitter, meanwhile, said in its letter to shareholders it anticipates a “modest” hit to ad revenue due to Apple’s update.

Here’s the thing, though. Even “modest” revenue hits are a big deal for investors, especially when it comes to two companies whose revenues are primarily driven by ads. Twitter and Facebook aren’t in danger of suddenly turning into MySpace — both companies have announced new products and features in recent weeks, including Facebook going after Apple with its own version of the Apple Watch. (New revenue streams never hurt.) But the last few weeks have shown Cook can make life tougher for Zuckerberg and Twitter CEO Jack Dorsey more than the other way around.

Amazon CEO Jeff Bezos, in perhaps the most surprising announcement from earnings season, said he will be stepping down later this year. Bezos founded the tech giant in Seattle in 1994. (Getty Images)

For the first time in its 27-year history, it will be someone other than Jeff Bezos atop Amazon. Bezos dropped the bombshell that he will transition to executive chairman and Andy Jassy will take over the whole company later this year. Jassy is currently the CEO of Amazon Web Services (AWS), the company’s cloud-based group that he formed in 2003, which drives much of Amazon’s profit.

Jassy was seen as the likely successor, having been with Amazon nearly as long as Bezos, joining in 1997.

The transition from Bezos to Jassy recalls how Disney handled its own CEO shuffle last year from Bob Iger to Bob Chapek. Like Bezos, Iger swapped the CEO title for executive chairman, and Chapek (like Jassy) was in charge of one of Disney’s biggest profit drivers.

Still, it will be strange to see someone else other than Bezos run Amazon, but he still figures to be active on his other projects, namely The Washington Post, which he bought in 2013 for $250 million.

It’s 2021, and Disney is the young tech startup focused on growth, while Netflix is the old guard touting profits.

Disney’s stock has remained largely on the upswing so far this year thanks to Disney+’s robust start, as the streamer closes in on 100 million subscribers in less than 18 months. This despite the fact that the pandemic continues to hammer Disney’s more-profitable businesses by keeping its theme parks either closed (looking at you, Disneyland) or operating at severely reduced capacity. And box office grosses are virtually nonexistent as most movie theaters remain shuttered worldwide. It increasingly looks like the only way the Marvel Studios title “Black Widow” makes its May 7 release is with the help of Disney+, which would cost the tentpole millions in box office revenue.

Disney’s profit this quarter was $29 million, down massively from last year’s $2.1 billion in the year-ago quarter. And yet, investors can’t stop looking at Disney’s shiny new object.

Meanwhile, as Netflix’s growth understandably slows compared to last year’s breakneck pace — and still managed to come in above analyst projections — the company is starting to tout its improved finances.

Netflix said it plans on being cash-flow neutral by the end of 2021 and cash-flow positive every year after. “We believe we no longer have a need to raise external financing for our day-to-day operations,” the company said in its letter to investors.

The COVID-19 pandemic, despite the devastating impact its had on the economy both in the U.S. and abroad, didn’t curb holiday spending. Instead, both Apple and Amazon reported record sales for the holiday quarter, with both companies bringing in more than $100 billion between October and December. That’s even rarer than you might expect: Apple and Amazon became the first two tech companies to hit the $100 billion quarterly sales milestone, joining Walmart and ExxonMobil as the only other companies to do so.

For Apple, the iPhone continued to drive sales. The linchpin device accounted for $65.6 billion, up 17% from the same time a year earlier and easily topping the $60 billion in revenue analysts projected. Amazon, meanwhile, thrived because the pandemic has closed stores and kept people from going out, helping to accelerate the shift towards online shopping that was already well underway.

Apple and Amazon’s results highlighted a fact that’s now obvious nearly a year into the pandemic: companies that were already industry leaders were better positioned to absorb the pandemic than small and medium-size businesses. Consequently, they’ve been able to continue gobbling up market share and grow, while others struggle to remain afloat. Apple’s valuation has doubled since early April, while Amazon’s stock price is up 74% since then. 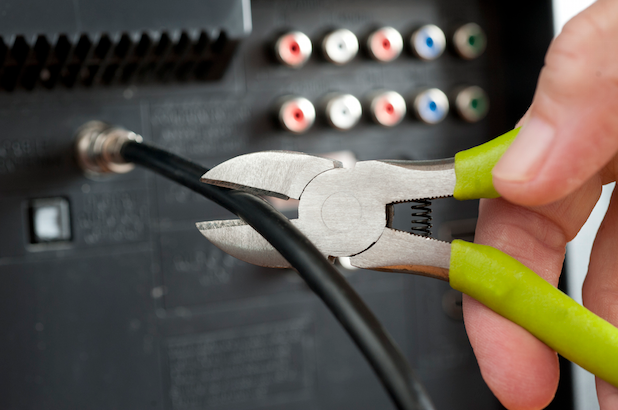 Cord-cutting has continued to accelerate during the pandemic (Getty Images)

Old school TV providers continued to lose customers in Q4, and DirecTV, as usual, led the charge. AT&T, DirecTV’s parent company, reported it lost 617,000 total subscribers across DirecTV, U-Verse and AT&T TV in Q4. It was a fitting end to the year for DirecTV, which lost 16% of its subscribers in 2020, finishing the year with 17.2 million. In related news, AT&T remains interested in offloading its floundering satellite business, but it’s having a hard time finding a buyer that’ll meet its goal of selling DirecTV for more than $15 billion.

DirecTV’s struggles are even more apparent when compared to other cable and satellite providers. Charter, for instance, looks relatively healthy, losing “only” 66,000 video customers last quarter; Charter also finished the year with 16.2 million video customers, up slightly from where it started 2020. DirecTV’s steady subscriber exodus also stands out when Disney+, Netflix and Roku all reported healthy Q4 gains, reinforcing the belief the revolution is being streamed, not televised.