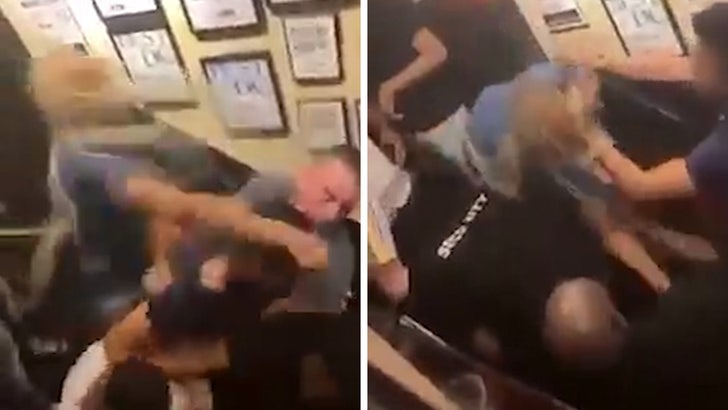 The Black woman who claims she was dragged down a flight of steps due to racial profiling was in the mix of a brawl right before the brutal act — but she’s sticking to her version of events.

Somebody captured what happened to Keisha Young at D.C.’s Nellie’s Sports Bar last weekend — but this video includes the moments before a security guard started yanking her by her hair.

It’s clear there was a massive fight going down at the top of the stairs, and Keisha was right there getting her licks in … throwing punches, until she appears to get tossed over the huddle of bodies down toward the security guard.

We can’t quite tell if it’s the guard himself who initially moves her, or if it’s someone else — but at any rate, once she’s at his feet … she starts to unload on him too, and he reacts.

That’s where the hair-dragging seems to begin from the original video that has since gone viral. Remember, Keisha’s attorneys told us they were outraged … because they felt she’d been singled out due to the color of her skin, suggesting racism was at play in her treatment — and they’re still maintaining that.

Keisha’s attorney, Brandon Burrell, tells TMZ … the reason Keisha is seen tussling here is because she was defending her cousin, Dayon Kidd, whom we’re told is the guy in the white T — and who we’re told Nellie’s security team was pummeling after some words were exchanged.

Long story short — her team says the facts haven’t changed … claiming she was approached by security when they mistook her for someone else and asked her to leave.

We’re told Keisha’s fam didn’t like the way they got at her, and in attempting to defend her … ended up brawling. Keisha’s team says this new video picks up after that. Burrell also says the truth would be seen easily … if only Nellie’s would release the full surveillance video.