Youth Pastor YouTuber Reveals He's Been Dating Girlfriend Since She Was 14!

Well, this is disturbing as hell.

A youth pastor who makes Christian YouTube content went viral for all the wrong reasons this week when Twitter rediscovered a post he put up in November 2020 wishing his girlfriend a happy birthday. A happy 18th birthday.

Again, this is a youth pastor, someone who was put in charge of young teens — so right away we are seeing red flags! Well, technically red, black, and gold flags because this all is happening in Germany. Very important legally. But we’ll get back to that.

Joshua Wesely posted a photo with his then-girlfriend Isabelle on November 17, 2020, writing:

“Finally 18. I can’t describe with words what you mean to me and what kind of person you are. You’ve been my best friend for four years, you are my girlfriend that I love, appreciate, respect, and admire more than anything.”

We say then-girlfriend. They didn’t break up since then. No, they got MARRIED last August. His and his wife’s IG pages are now private (though their bios proudly announce the fact of their marriage), but not before the incriminating post was shared everywhere:

When he says “you’ve been my best friend for four years” you might assume this is a story of grooming, but no. He’s saying it in the way someone says it in their vows. These two have been dating this whole time, since she was 14 years old. We know because — again, before they apparently started dodging attention by going private, folks looked into what they shared and found another post in which the couple celebrate their 3-year anniversary on February 18, 2020. That’s nine months before her 18th birthday. You don’t have to be a mathematician to figure that one out. 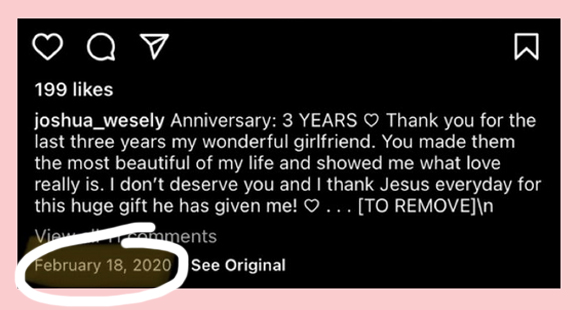 BTW, Joshua is currently 24 years old, meaning he was about 19 when he started dating a 14-year-old. And, and we cannot stress this enough, this is a youth pastor whose job involves interacting with teens.

Aside from his Christian YT content, Wesely is known for his 2021 Christian COVID conspiracy film 2025: The World Enslaved By Virus, which supposes a world in which governments have used the pandemic to outlaw Christianity. Joshua stars in the film, which he made with his brother Simon Wesely. The Weselys’ website (translated from German) reads:

“We believe that if Jesus were on this earth today, he would be on YouTube and Insta and that’s why we’re here. We base all our statements on the Word of God, on the Bible.”

OK, so why does it matter that this is all in Germany? Well, for a mind-blowing reason actually. The age of consent in Germany is still only 14 years old. This, we imagine, is why he hasn’t tried to hide any of this until now.

We suppose it was the spread of his film that led other folks around the world to the shocking discovery of his dating history. We can see some defending this as a cultural difference, but 14-year-olds in Europe aren’t developmentally different from 14-year-olds in the US. It’s too young. Period.

Bottom line, if this guy is gonna be paranoid about something being made illegal, it shouldn’t be his religion — it’s his relationship.