The Auditor-General will consider reviewing $40 million in federal government grants provided to Rupert Murdoch’s News Corp since 2017 to support coverage of women’s sport.

A letter sent on Monday from Auditor-General Grant Hehir to Greens senator Sarah Hanson-Young says he will look at adding an examination of the funding to News Corp’s sports pay-TV broadcasting arm to his office’s 2021-22 annual audit work program, which is due to be published in July. 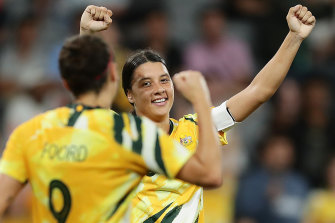 The ABC pays Foxtel up to $35,000 to broadcast some Matildas matches.Credit:Getty Images

Fox Sports received $30 million from the federal government in 2017 to increase coverage of women’s, niche and community sport over a five-year period. Fox Sports and Foxtel, jointly owned by Telstra and News Corp, merged in 2018. Another $10 million of taxpayer funds was provided to Foxtel in July 2020 as a coronavirus response measure, bringing the total to $40 million.

The grants were provided without tender, meaning broadcasters such as Nine Entertainment Co (owner of The Sydney Morning Herald/The Age), Seven West Media, Network Ten and the public broadcasters were unable to make a case to receive the funding.

In March, Foxtel made some women’s AFL and cricket matches free for non-subscribers of its streaming service Kayo Sports under its Freebies section in a move to meet some of its grant obligations.

Greens media and communications spokeswoman Senator Hanson-Young wrote to the ANAO in late April requesting it take a closer look at the funding arrangements.

“Australia has two public broadcasters who could have received the funding instead. In order for taxpayers to watch women’s sport on Foxtel they need to pay for a subscription, effectively paying twice,” she said in her letter.

The ABC pays Foxtel up to $35,000 to broadcast some Matildas matches, which she has criticised in the past as the private company double-dipping into the public purse. Foxtel has previously defended this sum as a “modest” contribution in return for the production of ABC coverage of matches.

Senator Hanson-Young raised concerns in her letter that high viewership wasn’t guaranteed simply by broadcasting it and there may have been more exposure on a free-to-air network. She noted the most recent $10 million was provided despite many sports not being played due to COVID-related restrictions.

“I hope you will agree that this program raises serious questions about value for money, processes undertaken for spending taxpayer funds and ultimately the ability for the so-called intent of a funding program to actually be delivered,” she wrote.

A Department of Communications response to a question on notice last year said of 4888 hours of under-represented sports broadcast by Fox Sports in 2019-20, about 5 per cent was on free-to-air.