‘A country that makes things’: Labor’s $15b manufacturing plan to be unveiled

Labor will propose a multibillion-dollar fund to pump-prime Australia’s manufacturing sector, promising to partner with the private sector, including superannuation funds, to commercialise local innovation in medical devices, pharmaceuticals, food processing and transport.

Opposition Leader Anthony Albanese will unveil the $15 billion National Reconstruction Fund as a key federal election commitment on Tuesday, which he says will drive regional economic development, boost the nation’s sovereign capability and diversify the economy. 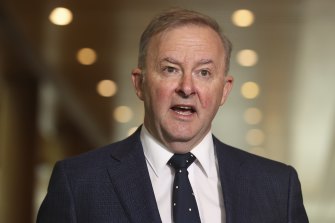 In his address to Labor’s traditionally triennial national conference, to be held for the first time online, Mr Albanese will tell party faithful the coronavirus pandemic had exposed serious deficiencies in the economy, in particular Australia’s ability to manufacture products and be globally competitive when it comes to innovation and technology.

Mr Albanese’s first speech to the conference as leader has been boosted by a deepening crisis within the Morrison government over a series of scandals surrounding behaviour and attitudes towards women. Despite a last-minute bid to stop the conference going ahead from the Right-faction aligned Health Workers Union, Mr Albanese’s support within his ranks has firmed in the past month.

“Australia must be a country that makes things, to have our own industrial and manufacturing capabilities,” Mr Albanese will say, according to a draft version of the speech.

“Building new industries and boosting our existing industries represents an opportunity for Australia to recover from the COVID pandemic with a stronger economy.”

Should Labor win the next election scheduled between August 2021 and May next year, the fund would be legislated and be governed by an independent board using the same financing model as the Clean Energy Finance Corporation.

It will provide $15 billion of investment through a combination of loans, equity, co-investment and guarantees and be administered on the basis that it will achieve a return to cover borrowing costs, with an expected positive underlying cash impact.

The fund is modelled on similar schemes in other jurisdictions such as Britain, New Zealand and Germany, which look to provide flexible and affordable finance to de-risk innovation and growth.

Labor has sharpened its attacks on the federal government over the rapid de-industrialisation of Australia during the past eight years. According to the OECD, Australia ranks last in manufacturing self-sufficiency among all industrialised countries, producing only 68 per cent of what it uses.

The federal government has made manufacturing a key part of the economic recovery, selecting six priority areas for support in a $1.5 billion manufacturing plan. They are resources technology and critical minerals processing, food and beverage, medical products, recycling and clean energy, defence, and space.

“If there is anything that COVID has taught us, it is the need for Australia to be a place which makes things, to have our own industrial and manufacturing capabilities – our own sovereign capabilities,” Mr Albanese will say.

“From commercialising our historic capacity in science and innovation to boosting the development of medical devices and pharmaceuticals, through to reviving our capability to make cars, trains and ships, today’s announcement will support the businesses in these industries to secure the capital and investment to grow and prosper.”