A crowd-stopping moment in every room: blockbuster exhibition is a must-see 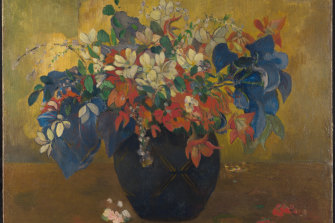 Why Botticelli? In an exhibition in which the first room includes remarkable paintings by Titian and Tintoretto, Botticelli’s Four scenes from the early life of Saint Zenobius (c.1500) is not exactly a highlight.

The painting belongs to a class of decoration called spalliere – long, horizontal panels inserted into a wall at shoulder height. It records chapters from the life of St Zenobius, a former bishop of Florence. The work is beautifully painted and immaculately conserved, but doesn’t bear comparison with the artist’s masterpieces such as The Birth of Venus or the Primavera, both in the collection of Florence’s Uffizi Gallery.

The reason this relatively modest piece gets star billing is because of the marketing requirements for a blockbuster exhibition in Australia, which equate big names with big attendances. When the final room contains a guaranteed jaw-dropper such as Vincent Van Gogh’s Sunflowers (1888), one part of the title is set in concrete. The problem is to decide which Italian Renaissance artist has the highest name recognition. In the absence of Leonardo or Michelangelo, Botticelli got the nod. 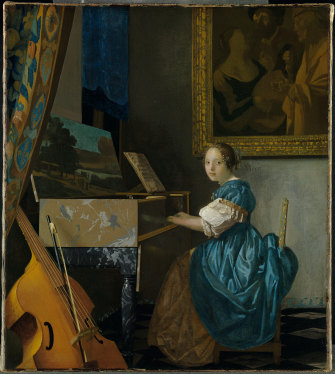 Johannes Vermeer’s A Young Woman seated at a Virginal has an aura of mystery.Credit:The National Gallery, London

Botticelli to Van Gogh: Masterpieces from the National Gallery, London is the first major international exhibition to reach this country since the coronavirus sent the world into lockdown. The show has been on hold for the best part of a year, in storage in Japan, while the National Gallery of Australia waited for the pandemic to subside. To launch early in March is a bold gesture, considering that we’re still wearing masks and scanning QR codes.

The NGA is hoping this show has enough pulling power to draw crowds to Canberra – hoping the desire to see great works of art will outweigh any scruples about the risks of travel. A secondary consideration is whether the typical Australian gallery-goer might say they’ve already been to London and seen the National Gallery collection. 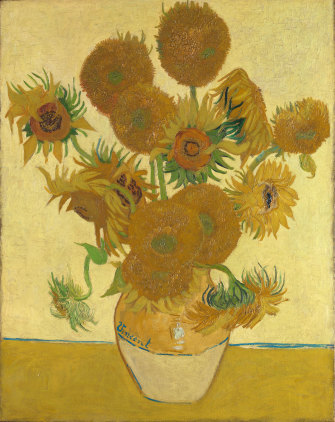 Vincent van Gogh’s Sunflowers has an intensity in real life that no photograph can capture.Credit:The National Gallery, London

The best answer to these equivocations may be that a truly great work of art is worth seeing again and again. I’d travel to Canberra simply to lay eyes on Rembrandt’s Self-portrait at the age of 34 (1640). By common consent one of the greatest portraits ever painted, it brings us into intimate contact with the Dutch master. Looking into the artist’s eyes we can imagine many different things. Although the work was intended as a display of self-confidence, it’s possible to detect a hint of anxiety in Rembrandt’s gaze, as he strains to maintain his savoir-faire. Perhaps there’s also a flash of arrogance, a vice that would be his undoing in later life.

Experts have raved about the “humanity” of Rembrandt’s portraits but to be human is not only to be the measure of all things, it is to be fallible, to err and suffer. Had he been a philosopher, Rembrandt might have said, with Montaigne, “I have never seen a greater monster or miracle than myself.” Being a painter he has captured these sentiments in this searching image of his own face which transcends the claims of his ego. 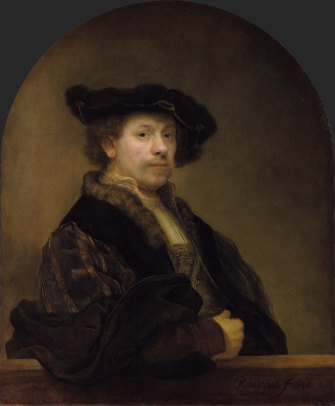 Rembrandt’s Self Portrait at the Age of 34 is by common consent one of the greatest portraits ever painted.Credit:The National Gallery, London

“Masterpiece” may be one of the most abused terms in the art lexicon but with the National Gallery there are only 2,300 works in the entire collection. This means there is very little fat, hardly anything that might be described as second-rate or average. Everybody seems to have their personal favourites. The painter, Jeffrey Smart, would rhapsodise about Piero della Francesca’s The Baptism of Christ (1450), but the work I can never get enough of is Piero di Cosimo’s A Satyr mourning over a nymph (c.1495).

Neither of these works are displayed in Canberra but almost every room contains paintings that should stop viewers in their tracks. The most obvious is the luminous Sunflowers, a painting so iconic that the critic, Lawrence Alloway, once coined the term “sunflowering” for the process whereby a work is reproduced so often that it becomes an empty item of popular culture. The antidote for this is to look for 10 seconds at Van Gogh’s actual painting. It has an intensity no photograph can capture. 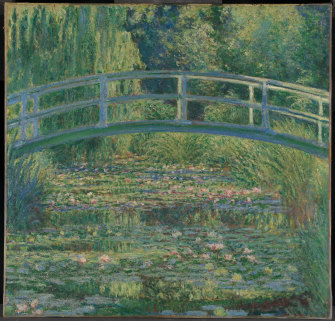 Claude Monet’s The Water-Lily Pond, 1899, is part of the exhibition.Credit: © The National Gallery, London

Another iconic painting is Vermeer’s A young woman seated at a virginal (c.1670-72). We have so few works by Vermeer that each one is priceless. This small oil displays the jewel-like colour, the mastery of light and shade we have come to value so highly. It also presents a mystery, as we have no idea who the young woman is, or what she might be playing. Who is she looking at? The artist? Her audience? Maybe you and me.

Aside from these famous pictures, I’d recommend a long pause in front of Gainsborough’s Mrs Siddons (1785), a portrait of one of the most famous actresses of the 18th century. No longer in the first flush of youth, Mrs Siddons is still an awesome proposition: distinguished, expensive, handsome rather than classically beautiful. Silks, furs and draperies swirl around her in suitably dramatic fashion. 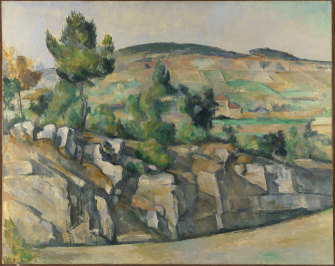 Paul Cézanne’s Hillside in Provence, circa 1890-92, is also in the exhibition. Credit:National Gallery, London

On the other side of the room spare a moment for Thomas Lawrence’s Queen Charlotte (1789), which shows the long-suffering wife of George III, looking worn but serene, buried in a mountain of soft, fragile fabric. The artist has captured a beauty that transcends old age, perhaps the most forgiveable form of flattery.

Turner’s Ulysses deriding Polyphemus – Homer’s Odyssey (1829) or El Greco’s Christ driving the traders from the temple (c.1600), would be major attractions in any show, along with pictures by Uccello, Titian, Tintoretto, Hals, van Dyck, Goya, Velazquez, Cézanne and Monet. I’ve seen these pieces many times, but one I hadn’t noticed that struck me with real force was Girolamo Giovanni Savoldo’s Mary Magdalene (c.1535-40).

Mary Magdalene is probably the most defamed figure in Christian history, having been transformed into the epitome of the “fallen woman” on the basis of very little evidence. Savoldo’s teasing, puzzling image shows Mary wrapped in a silvery cloak. The part of her face we see wears an enigmatic smile. She looms like a mountain against a gloomy backdrop, each fold and wrinkle in her cloak being delineated with exquisite care. A small white jar in the left-hand bottom corner presumably contains the ointment with which she anointed Christ’s feet.

It’s an image almost 500 years old that is just as engaging today as it must have been for its first viewers. It demonstrates why we need to keep looking at the Old Masters, because the best of them have the capacity to renew themselves from one age to the next.