The great wash vs wipe debate! Woman provokes a VERY heated discussion by asking how people can think using loo roll is sufficient instead of cleaning with water after going to the toilet

A woman who was taught to use water to clean up after using the toilet has sparked a debate after questioning why dry wiping with toilet roll is considered sufficient.

Taking to the British parenting forum, Mumsnet, the anonymous woman said she was raised in the UK by a Middle Eastern mother, and asked whether she was being unreasonable ‘to think there’s no way you can wipe your bum clean.’

Confessing that she’d often wondered whether people who use tissue wet it before use the woman revealed that she was accustomed to using either an installed toilet hose or a jug of water after she was finished.

Apologising for the ‘silly’ question, she wrote: ‘I’ve always wondered, do you genuinely think your bum is clean if you only wipe?’

Commenters were instantly torn between the wiping or water techniques with both sides branding each other ‘disgusting’. 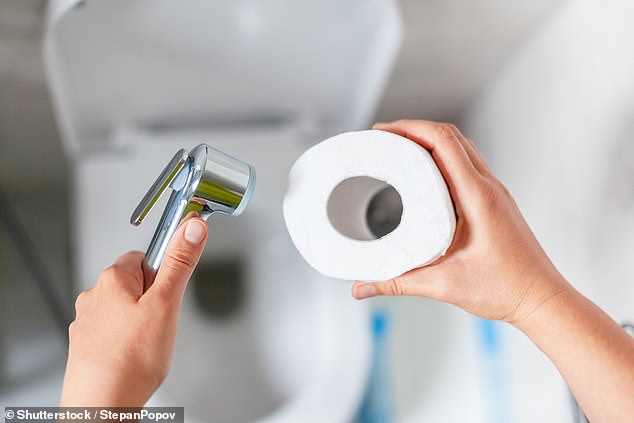 ‘Born in a mixed race family with a Middle Eastern mother, I was always taught to wash my downstairs with water after no ones and twos,’ she said.

‘We have a built in mini shower head thing to just spray our bums clean, and before that we used to have a jug sort of thing.’

‘The way I see it, if someone dropped a few drops of urine or fecal matter on my flooring at home, I’d scrub it clean and at least use some water.’

‘No way would I give it a wipe clean with a dry wad of tissue! So how can your skin be clean?’

‘Am I missing something? Do you wet the tissue before use? Sorry for the silly question! Have always wondered.’

One perplexed commenter who preferred to wipe said: ‘If you dropped poo on your floor I doubt you’d just spray it with water either!’

‘Neither method gets the area 100% spotless and germ free but it’s enough to keep you going until the next proper wash.’

Someone else, who agreed with the theoretical floor wiping method said, ‘I think my floor would be cleaner if I wiped it with dry tissue than if I poured water over it. Mechanical removal and all that.’

A third person said, ‘So with the little shower nozzle, do you all put the same one really close to your bum with poo on it? Or do you wipe first? I don’t get it, surely that nozzle is really disgusting?’

Others however could not understand how people could go about their day after having not used water to clean themselves.

One person wrote: ‘It’s not about being germ free, it’s about cleanliness. I do the same with a bidet or jug and would use a plastic water bottle or similar when out.’

‘I do carry toilet wipes when out for my children as well or at a push will wet toilet paper and use it to wipe. Always wonder about this too, wiping is not adequate to clean.’

Another commenter agreed and said they’ve gone a step further, explaining: ‘I have an electronic in-toilet bidet. It washes with warm water, front and back, and then dries with warm air. No paper required.’

‘I think the same as you about dry bits of paper – how on earth does anyone think that this method cleans them ? Erk.’

A third person was outraged at the prospect of dry wiping, and wrote: ‘Toilet paper is disgusting on its own, you would hope people wouldn’t use it to remove wee or poo from any other part of their body, so I have no idea why some people find it acceptable to smear wee and poo on their genitals and just leave it there.’