Alex Davies continued his sparkling start to the Vitality Blast as his 82 from 56 balls helped Lancashire Lightning to a tight four-run win over Derbyshire Falcons.

Davies backed up his 65 against Durham on Thursday, striking four sixes and five fours before falling 18 shy of a maiden T20 ton in Lightning’s 178-5.

Falcons – who remain winless in the North Group this campaign – appeared out of the running when they slipped to 60-3 after nine overs.

However, Wayne Madsen (44 off 27) – batting with a runner after injuring himself ramping a four – and Leus du Plooy (29 off 16) fired in the middle order. The equation was then reduced to seven from three balls when Matt Critchley (32 off 20) attacked Tom Bailey in the final over, which began with Derbyshire requiring 19.

Bailey, though, held his nerve and with the Falcons needing six off the final ball to win and five to tie, Harvey Hosein could only secure a single.

Madsen’s injury was a possible turning point for Derbyshire, with the 36-year-old’s movement subsequently restricted before he holed out off Matt Parkinson in the 15th over as his team ended on 174-7.

Davies’ dynamic innings proved key, though – the Lancashire opener sharing half-century stands with Keaton Jennings (29 off 22) and Steven Croft (38 off 21) before Falcons pulled back the run rate with a cluster of wickets. 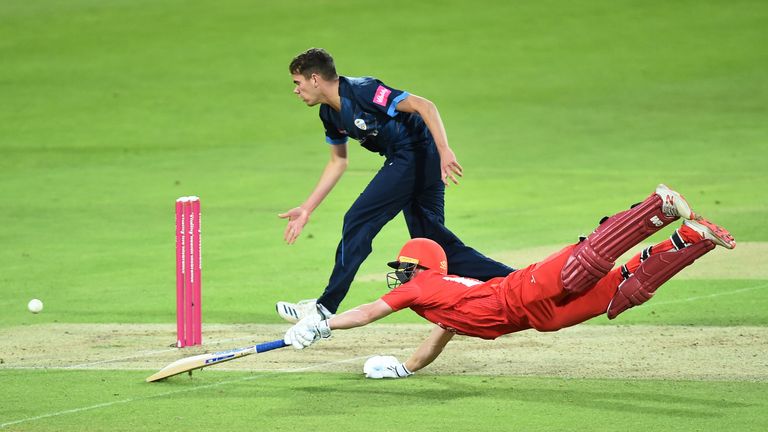 Lancashire always appeared to have the edge during Derbyshire’s chase, especially when Luis Reece (39) was third man out, caught on the scoop off Danny Lamb.

Madsen, du Plooy and Critchley gave Lightning a scare but Dane Vilas’ side edged home to join Nottinghamshire at the summit of the North Group on five points from three games.