Former education department bigwig Nino Napoli will be sentenced for rorting a fraction of the millions of dollars of school funds he was originally linked to by Victoria's anti-corruption commission.

Napoli was in 2016 accused of mishandling more than $6 million in Department of Education and Training funds following an extensive probe by the Independent Broad-Based Anti-Corruption Commission. IBAC also alleged he personally benefited by $1.9 million as the main player in a corruption ring that profited through fake invoices and suspicious contracts. 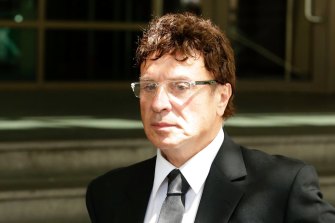 Nino Napoli outside the Melbourne Magistrates Court in 2017.Credit:Darrian Traynor

But in a plea deal with prosecutors that was finalised this year, Napoli admitted an involvement in 72 invoices worth more than $500,000 that between 2007 and 2014 were paid to companies run by his relatives and that his personal benefit was $95,000.

But a payment for his signature toupee was among the money misappropriated, the County Court heard on Thursday, as a woman was paid $2000 to help Napoli regularly maintain his hairpiece.

The funds Napoli and his relatives misappropriated were designated for schools from the department's budget.

Napoli and cousin Carlo Squillacioti, the director of companies illegally paid during the rort, pleaded guilty to one charge each of conspiracy to defraud and attempting to pervert the course of justice. Napoli was originally charged with 152 offences.

Prosecutors say Squillacioti personally benefited by $58,000. But they cannot prove where the rest of the money went.

Both men are on bail and watched via video links on Thursday as prosecutors detailed their crimes.

In Napoli's then role as general manager of the department's finance unit, he was responsible for a $5 billion budget that included awarding contracts to private companies to carry out works and services for schools.

Prosecutor Andrew Grant said Napoli abused his knowledge of the department's "banker school" scheme – where a designated school received large amounts of funds to share with nearby schools – by using department money to pay invoices or directing banker schools to pay.

The invoices were created by his relatives, Mr Grant said, notably by distant cousin Daniel Calleja, who subcontracted works to other companies. Calleja's involvement disguised that of Napoli's direct relatives who were banned from being awarded contracts under conflict of interest laws.

While some work was legitimately done, the court heard there were numerous examples of companies being paid thousands of dollars for nothing. Two of Squillacioti's printing companies did not have equipment.

At times Napoli instructed Calleja how to write invoices and advised him to "beef up" the wording so they better described work that never occurred.

By 2014 Napoli and Squillacioti were aware of IBAC's investigation and instructed Calleja, other family members and associate Michael Giulieri, a former school principal, to mislead investigators and destroy incriminating documents.

A listening device recorded Napoli telling Giulieri: "We have to get your story right or I am shot – gone."

Napoli confided to a department worker he told investigators "a few little porkies" in his interview, but that IBAC needed to understand "the culture".

Both charges carry jail time but prosecutors are yet to say whether they are pushing for a custodial sentence.

Defence counsel Jim Shaw acknowledged Napoli's breach of trust but said the money misappropriated was a "tiny percentage" of what was originally alleged.

The plea hearing will return next week.

Calleja and Giulieri were sentenced in 2017 but spared jail.