Social media posts can be ever so revealing. Who is the unlikeliest fan of ­Labour’s new leader Sir Keir Starmer?

None other, it seems, than our Tory Prime Minister’s own younger brother, Leo Johnson, who has ‘liked’ a series of gushingly positive tweets about the millionaire former lawyer.

One of the missives Leo, 52, has approved was posted by Starmer himself, showing a room full of cheering fans bearing the slogan: ‘Together, we can achieve the impossible.’

Another, from London Mayor Sadiq Khan, claimed that Starmer was ‘the best person to unite our party, take the fight to the Tories and put Labour in government’. He works as a forecaster for accountancy firm PwC . Yet Boris is used to fraternal disloyalty.

Jo quit his own broth – er’s Government last September, while Rachel unsuccessfully fought to be an MEP for pro-EU party Change UK — and was once a member of the Lib Dems.

Leo has said he differs from his ferociously ambitious relatives: ‘I’m born with the gene for self-publicity missing or at least defective. It comes on and off, and when it comes on, no one is interested.’

No one, perhaps, except Boris, who might look askance at the fact that Leo is quietly informing the world he supports kicking his 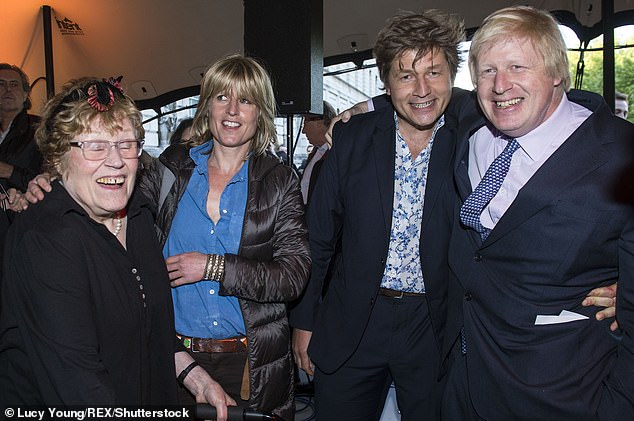 Landing with a smack on Starmer’s desk on his first day as leader was a damning indictment of why Labour lost the last election, written by the New Labour pressure group Progress. ‘Jeremy Corbyn and the politics he represents alienated the general public,’ declares the group. ‘ Our contorted Brexit policy ended up pleasing no one.’ And which political contortionist was responsible for this policy? Step forward exLabour Brexit spokesman Sir Keir Starmer!

Is Foreign Office Minister James Cleverly daring to mock Rishi Sunak’s groaning library shelves, paraded to the world by the hoodie-sporting Chancellor in a recent post to social media?

The cheeky Cleverly wonders: ‘I’m going to post a working from-home picture tomorrow. Is it mandatory to take it in front of bookshelves?’

Perhaps the answer lies with former Home Secretary Jacqui Smith, who spoke to ITV’s GMB from her home on Friday.

Smith, appearing in front of a shelf of crockery, piped up with: ‘I’ve got my jugs on display today!’

Labour MP Rupa Huq moaned of Friday’s coronavirus briefing: ‘When will Downing Street allow a woman minister to front up one of these press shindigs?’ One might also ask: when will Labour allow a woman to lead the party? Surely Rupa is the first to cry out against this blatant sexism? Or not. ‘Keir Starmer smashed it . .. Looking forward to working with him in the years to come and seeing him as PM,’ Huq gushed.

An audience of 200,000 enjoyed the National Theatre’s live-stream of James Corden’s farce One Man, Two Guvnors.

‘The Croatian National Theatre is streaming a discussion from 2018 between me and [philosopher] Srecko Horvat about post-capitalism, Labour and Europe,’ he tweeted. Sorry, Paul.

I think I’m washing my hair.

Is it time we all took advice from Ronnie Barker? In the classic Porridge episode A Night In — available to watch now on BB C iPlayer — Barker’s jailbird character Fletch says: ‘That’s what you’ve got to tell yourself: you’re just having a quiet night in.’ Fellow lag Godber replies: ‘Trouble is, I’ve got 698 ‘quiet nights in’ to go!’ Let’s hope the lockdown doesn’t last for quite so long a stretch

And finally, many thanks for your messages after I came down with Covid-19. I’m almost fighting fit, but clearly not 100 per cent, as I discovered when I walked into my kitchen yesterday and found the air thick with black smoke. The toast had charred without me realising anything. One common symptom is the loss of taste and smell: clearly mine have yet to return. At least the smoke alarm now has a working battery.