Roughly 600,000 more young children need a first dose of a COVID-19 shot for the federal government to reach its vaccination target, as a recent survey shows a quarter of parents are hesitant or don’t intend to vaccinate their children.

A group of health experts and government officials will meet next week to discuss how to boost uptake among five to 11-year-olds, which less than two months into the rollout has fallen to below 5000 doses a day on average. 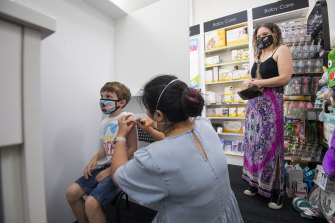 About 40 per cent of parents said they had already had their children immunised, and a further 36 per cent said they intended to vaccinate them against COVID-19.Credit:Louise Kennerley

Vaccine expert Professor Julie Leask, who will convene the vaccination roundtable, said persuading hesitant parents to get their children vaccinated and ensuring those who intend to get their five to 11-year-olds immunised follow through will be critical to turning around uptake.

“We’ve achieved quite a lot, getting to almost 50 per cent, but it has plateaued now,” Professor Leask said. “Some parents may not have had the time to book an appointment and some are waiting because their child has been infected with COVID-19. And there is some hesitancy that needs to be addressed.”

The latest data on vaccination intentions collected by Operation COVID Shield shows in January, 76 per cent of families of five to 11-year-olds are positive about vaccines. About 40 per cent of parents said they had already had their children immunised, and a further 36 per cent said they intended to.

Health Minister Greg Hunt said the government was focused on ensuring the families who want to get their children immunised book in to get vaccines. The government also sees the 15 per cent who are hesitant as open to being convinced of the benefits of immunisation.

Mr Hunt said the government wanted the number of children vaccinated to reach 76 per cent, to match the intention to vaccinate data.

“We want to see it go beyond that, but we want to get it to at least that,” he told reporters on Tuesday.

So far 49.2 per cent of five to 11s have had at least one dose, and less than 1 per cent have had two. The Australian Technical Advisory Group on Immunisation recommends the age group wait eight weeks between doses.

Australia, which has the fourth-highest rate of vaccinations for five to 11s, began vaccinating that age group on January 10 this year. The countries with higher rates for those children – Singapore (65 per cent), Spain (nearly 57 per cent) and Canada (56 per cent) – began vaccinating late last year.

The United States, which began vaccinating that age group in November, has only given first doses to 32 per cent of children.

“Whilst there are thousands of points of presence around Australia, actually taking it to the parents and taking it to the children through the schools is one of the critical steps forward,” he said.

“There is complacency coming and people have pandemic fatigue. People want life to get back to normal. There is likely a big range of factors why parents haven’t had their kids vaccinated. Many still have questions about the risks and benefits,” Dr Price said, noting that combating misinformation on social media was also critical.

Professor Leask said there was also a perception that children were at lower risk of serious illness from COVID-19.

“Even though COVID is less risky for our children, the vaccine will reduce their chance of getting a serious rare side effect of an infection like multi-system inflammatory syndrome,” she said, referring to a condition where inflammation can occur in the body about two to four weeks after infection.

“We need to be clear the vaccine not only protects your child but also their friends and family. It also protects the community – all of us – by reducing transmission.”