The fired Atlanta police officer who is charged in the fatal 2020 shooting of Rayshard Brooks, a 27-year-old Black man, has been reinstated. The Atlanta Civil Service Board reversed his firing on Wednesday, ruling that Garrett Rolfe was “not afforded his right to due process.”

“Due to the City’s failure to comply with several provisions of the Code and the information received during witnesses’ testimony, the Board concludes the Appellant was not afforded his right to due process,” the board said in a five-page decision. “Therefore, the Board grants the Appeal of Garrett Rolfe and revokes his dismissal as an employee of the APD.”

On June 12, 2020, Rolfe and another officer responded to a call that a man was sleeping in his car at a Wendy’s parking lot. Police said Brooks failed a sobriety test and struggled with police when they tried to cuff him.

Brooks wrestled a stun gun away from an officer and attempted to flee. At one point, Brooks aimed the stun gun at police and Rolfe shot Brooks twice in the back, authorities said. Brooks died after undergoing surgery at a nearby hospital. The local medical examiner said Brooks listed his cause of death as a homicide.

Rolfe faces 11 charges, including felony murder, aggravated assault and violation of oath of office. After announcing the charges, Paul Howard, the Fulton County district attorney, said Brooks did not pose an “immediate threat” to the officers. 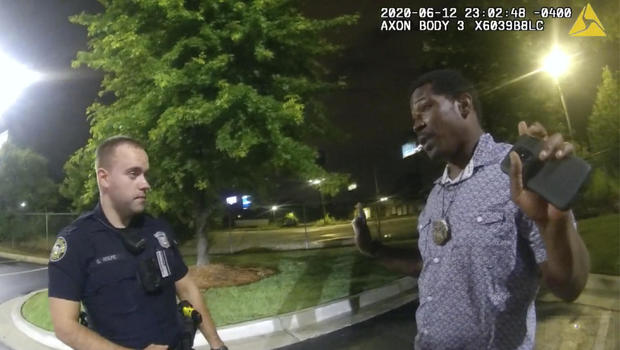 Rolfe was fired one day after the shooting. The Civil Service Board said Rolfe was not given 10 days’ notice of his firing, which is required under the city’s code. The board noted that its “sole mission is to determine if the City’s imposition of an adverse employment action complied with the Code.”

Attorneys L. Chris Stewart and Justin D. Miller, who represent Brooks’ family, said they were notified ahead of Rolfe’s reinstatement but said the family was disappointed. They also urged local officials to reverse the ruling.

“It is a pattern of being ignored,” Stewart said in a news conference Wednesday. “Right now, officer Rolfe has received more justice than Rayshard Brooks. It is greater than just the officer. It is the entire way civil rights is being handled in the city of Atlanta.”

The shooting happened just weeks after George Floyd died in Minneapolis police custody, fueling widespread protests across the country. The night after the shooting, the Wendy’s where Brooks was shot was set on fire.

Atlanta Mayor Keisha Lance Bottoms on Wednesday defended her decision to fire Rolfe. “Given the volatile state of our city and nation last summer, the decision to terminate this officer, after he fatally shot Mr. Brooks in the back, was the right thing to do,” Bottoms said in a statement. “Had immediate action not been taken, I firmly believe that the public safety crisis we experienced during that time would have been significantly worse.”

Ron Serpas, a former police chief in Nashville and New Orleans, said the quick firing of Rolfe was misguided: “Why make a sophomore mistake like this? To then have it turn into more pain and suffering for everyone involved.”