China Mobile is firming as the most likely Chinese company to make a play for telecommunications assets in the Pacific in a move that would trouble Australia’s national security agencies.

Digicel, owned by Irish billionaire Denis O’Brien, is under financial pressure and looking to offload its mobile phone networks across the region including in Papua New Guinea, Fiji, Tonga and Samoa. 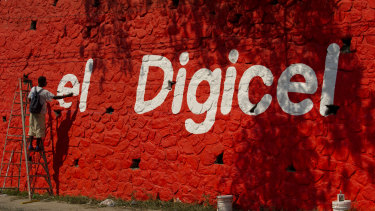 China Mobile is firming as the most likely Chinese company to make a play for Digicel.Credit:Getty

The Morrison government is considering using the nation’s export credit agency, Export Finance Australia, to provide support to other private bidders looking to acquire the assets.

This could be in the form of subsidised loans or loan guarantees.

Australian security agencies are concerned about the prospect of a Chinese telco gaining a foothold in the region and potentially spying on its close neighbours, government sources said.

But senior Australian government officials are also concerned about the precedent of a debt-laden telco raising the threat of Chinese companies buying its assets to extract money out of Australian taxpayers. 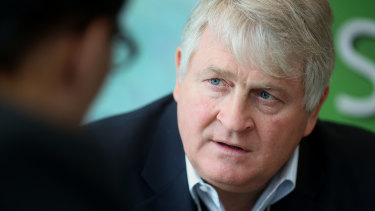 Digicel’s owner Denis O’Brien is reportedly asking for more than $2 billion for the Pacific assets.Credit:Bloomberg

While Chinese companies Huawei and ZTE were reported to be interested in buying Digicel’s Asia Pacific division, industry sources said the most likely company was China Mobile.

Huawei and ZTE were unlikely to want to buy their own customers, industry sources said, but it could make financial sense for China Mobile to acquire the assets.

Mr O'Brien is reportedly asking for more than $2 billion for the assets, but industry sources put the value at less than $1 billion.

“The Digicel example shows how strategic and economic interests are now intertwined, but despite this, Western government and corporate approaches are struggling,” he said.

“While China is operating across state and corporate boundaries in how it approaches ‘commercial’ transactions, our own and other democratic societies are stuck with approaches that separate the strategic and the financial.”

Philip Citowicki, who was a policy adviser to former Foreign Affairs Minister Julie Bishop, said Digicel and Mr O’Brien “would be acutely aware that raising the spectre of Chinese coercion will capture the attention of Australia and its allies”.

“It is a cynical move, but one that is nevertheless rooted in reality,” he said.

“Chinese entities, benefiting from financial and political support, would be interested parties and even false-flag interest from China would drive up the cost of any Australian support. Countering such strategic moves are a costly but necessary reality for Australia and like-minded allies.”

A spokeswoman for the Department of Foreign Affairs and Trade would not comment on Digicel’s Pacific assets, but said partnering on infrastructure development was a “key part” of the government’s Pacific step-up.

The DFAT spokeswoman said any proposal “is considered on its merits”.

“Where appropriate, the Australian government supports Australian businesses investing in infrastructure in the Pacific, including communications infrastructure, which plays a key role in economies across the region,” she said.

A spokesman for Digicel confirmed it had “received unsolicited approaches from a number of parties in respect of its Pacific operations, which are amongst the strongest performing markets within the 32 market group”.

“The company cannot comment further as discussions with the parties are private,” the spokesman said.